How to perform a zero-downtime upgrade of Elasticsearch in production

In this blog, we're going to walk through the steps for upgrading an Elasticsearch environment with zero downtime. We will provide guidelines and strategies to minimise risk while running the upgrade on an active production environment. Here are the items we'll go through:

Your upgrade path will depend on your To and From versions. So as a first step, a comparison between the existing deployment version and the prospected version should be made. Here are a few things we recommend: 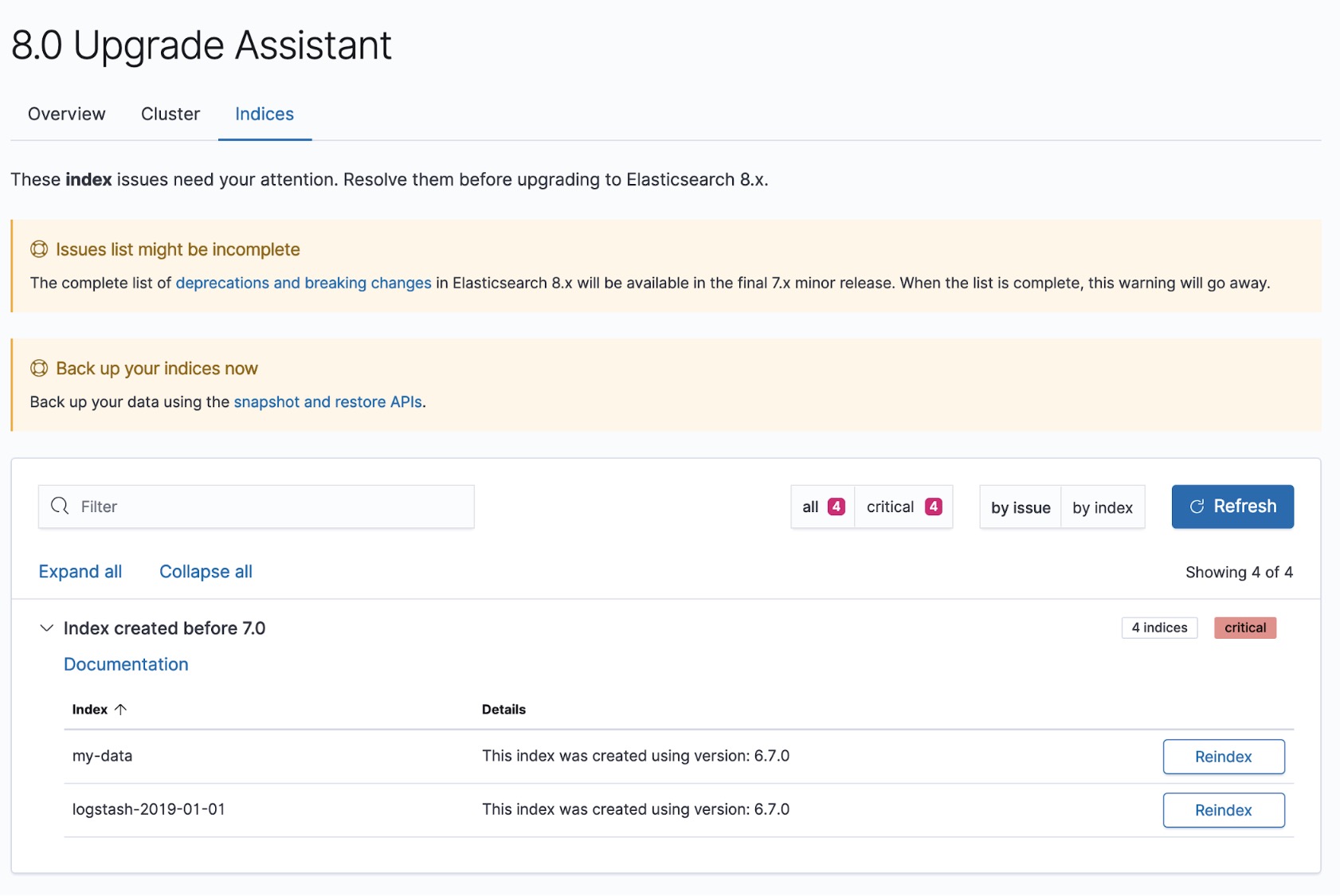 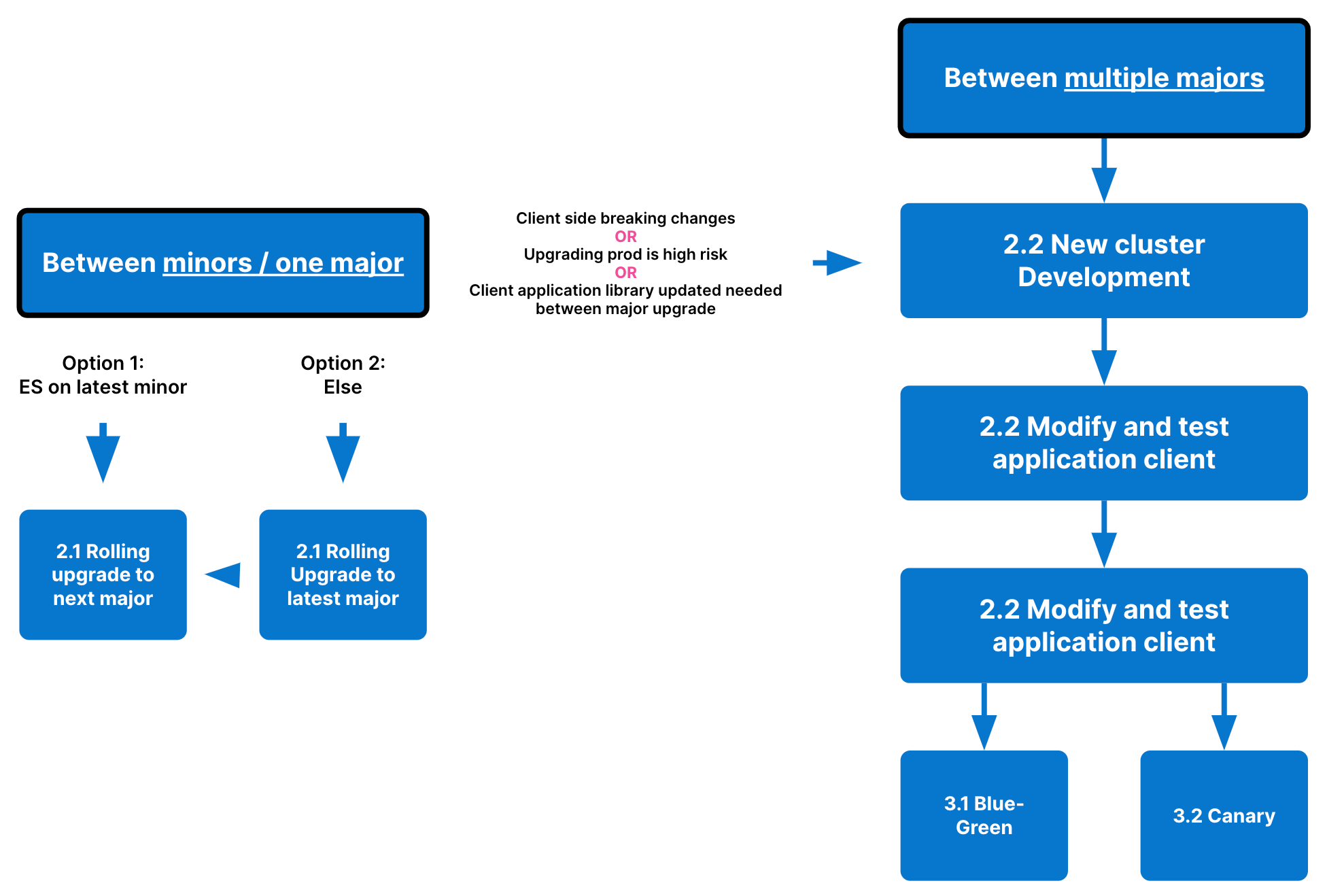 Before running a cluster upgrade, it is recommended to take snapshots as part of the rollback strategy. This is because once a node from a newer version joins the cluster, downgrading the cluster may no longer be possible. At this point, if a downgrade is needed this will only be possible using a snapshot. Apart from upgrades, backups are also important for recovering data in case of failure or accident therefore it is always a best practice for snapshots to be captured.

The quickest upgrade path would be a rolling upgrade. A rolling upgrade allows an Elasticsearch cluster to be upgraded one node at a time so it provides zero downtime.

Rolling upgrades are supported between:

While a rolling upgrade is supported in the above scenarios, a rolling upgrade on a production environment will always carry some risk, as something could go wrong during the process. Aside from unexpected issues, another factor to bear in mind is that your rolling upgrade will roll one node at a time. This means you'll have one less node to accept search and index requests while you upgrade. If an overload risk is too high, the better alternative would be to deploy a new cluster as described in section 2.2.

2.1.1.  Elasticsearch is running the latest minor

As Elasticsearch is backward compatible between the latest minor and the next major (meaning full functionality support, including with client apps),  you must still upgrade the client library to the matching major and recompile your client application so it works with the new version. Furthermore, it is always recommended to perform a build verification on a dev environment prior to a production upgrade.

2.1.2.  Elasticsearch is not running the latest minor

In this scenario, it is possible to perform rolling upgrades with two phases. The first step would be to upgrade for the latest minor and the second step would be between major versions. For example, first from 6.1 to 6.8 and second from 6.8 to 7.10.

This solution would be suitable only if the client application can communicate with both Elasticsearch versions and all breaking changes in the application code have successfully been resolved. You will also need to upgrade the client library to the matching major and recompile the client application. Otherwise, you can deploy a new cluster on the proposed version, apply change code in accordance, and define a deployment strategy as described in section 3.

If the upgrade will be between multiple versions (for example 5.x to 7.x), the client application will need to be upgraded and a deployment strategy needs to be applied. It is also possible to perform a series of rolling upgrades, however it is likely to be more effort than deploying a new cluster, as the dataset would need to be reindexed fully in either case.

If the client application can communicate with both Elasticsearch versions and there are no breaking changes in the application, deploy a new cluster aside the existing one with no application changes apart from client upgrade.

In this scenario the application would navigate traffic to both existing and new clusters simultaneously using a blue-green or canary deployment (more details in section 3).

Alternatively, if there are breaking changes in the client library, a new release would be necessary and the deployment strategy would need to be applied on both Elasticsearch and the client application as a bundle, meaning that at the same time there would be two deployments:

Preparation and testing should minimize the risk of an upgrade. Having said that, in most cases, a testing environment would typically not simulate a one-to-one real world scenario. Therefore, it is always recommended to have a regression path in case something goes wrong.

In a blue-green deployment, the blue environment would serve 100% of the traffic at each point, while the green would be ready to take place. To migrate, the traffic would be switched all at once between environments.

In the blue-green route, a few things should be taken into consideration:

In a canary deployment, at each point we will have the legacy environment serving the majority of users and the new environment would be initially tested with a small group of users.

During the upgrade the environment should be monitored to assure it’s healthy.

In production, you should always send the data to a separate monitoring cluster. The monitoring should ideally populate all pillars of observability for both the client application and Elasticsearch:

You can use this existing monitoring deployment to watch your upgrade as well. Otherwise, consider setting one up for at least the length of the upgrade.

To validate the new deployment, define success criteria. For example, gather statistics from the running environment to analyze its normal behaviour. For that you can use the current environment monitoring dashboards or create dedicated dashboards. This will help you to prepare for the testing phase and validate a successful testing operation by comparing between the current and new deployment statistics. Possible indicators can be low latency, no CPU or memory pressure, no bottlenecks or lags, similar error rate  and other factors that are relevant to your application.

Before running in production, the new environment should be tested and the changes should be isolated by keeping the test environment as close as possible to reality.

Perform build testing to verify that all of the critical functionalities are working as expected with the new version. The smoke test main goal is to verify the initial stability of the system. Common things to check are that the GUI is up and running, the application is able to integrate and login to Elasticsearch and other third party applications, all application workflows are working as expected, all query or indexing requests are successful, etc.

Once everything has been done the only step left would be to apply! The final step is to make sure you have an automatic procedure to minimize human errors. If you’re running on Elastic Cloud, the Elasticsearch upgrade can be done with a single click! Along with a wide RESTful API to apply on automations. Once the process is completed, the deployment should be automatic and repeatable for future successful updates.

That's it! The upgrade is done and your users barely noticed! When running an operation such as an upgrade, planning in key. Now that this upgrade is complete, you can take your lessons learned and use them to  prepare a tailored deployment strategy for your next upgrade. Doing so will ensure that each future upgrade should be easier than the last. And by thoroughly documenting the entire process, you'll know that you won't have to worry about the next upgrade (even if you're on vacation)!

If you're interested in learning more, check out our Expert Tips when Upgrading webinar. If you have any questions, reach out on our Discuss forums. And as always, the easiest upgrades are on Elastic Cloud, so give it a try for free if you haven't already.