When optimizing machine learning (ML) models, model performance often is prioritized over model interpretability. However, in the field of information security interpretability is a sought after feature, especially in the realm of malware classification. By understanding why a model classifies a binary as benign or malicious, security practitioners are better equipped to remediate an alert.

We worked with the ember benchmark model, a classifier that is currently not interpretable, to design a measure of interpretability that will determine which features contribute to the model’s predictions. This enables future ember users to quickly interpret and explain their findings, highlighting the value of focusing on both performance and interpretability in ML models.

The Shapley values method, which quantifies how much each model feature contributes to the model’s prediction, is the only one that can determine each feature effect on a global scale and thus give a full model explanation. For this reason we chose to use SHapley Additive exPlanation (SHAP) Values, an extension of the Shapley values method, to assess interpretability for the ember benchmark model. For a given model, all the SHAP values are summed to get the overall difference in model prediction in comparison to the baseline prediction without considering feature effect. The SHAP paper is available here and the open source code we utilized is available here.

We applied SHAP value-based interpretability to the ember model in two ways: model summary and single file. Each of these are discussed below.

The ember dataset consists of raw features extracted from over one million files/samples that are used as training/test sets for the ember model. Each file’s raw features are converted into 2351 vectorized features. By creating a SHAP summary plot for the model, we were able to determine the 20 features (out of 2351) that affected the model the most and how changes in these values affect the model’s prediction. 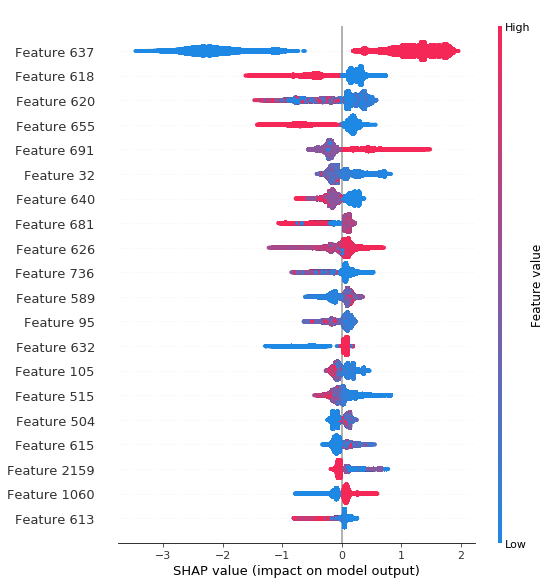 While understanding features’ effects on the model is important, ideally we want to provide a file and identify how the features in that file specifically influence the model’s prediction.

It would be possible to visualize how each of these 2351 features contributes to the model; however, we determined that the visualization would be too cluttered for a user to extract any meaningful information. Instead, it would be more informative to understand how each feature group contributed to the final prediction so that the user would know what part of the file to scrutinize more.

In addition to feature group importance, we also provide a list of the top five features in the file that contribute to the prediction the most, as well that feature’s information. An example can be seen here: 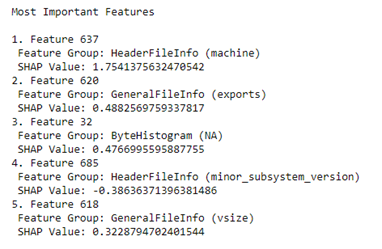 While we can say which features contributed most to the model’s prediction and what groups/subgroups they are in, the next step would be to identify what exactly that feature represents. For example, from the visual above, we can say that Feature 620 is a part of the General File Information, specifically the exports section, but ideally, we would be able to determine exactly which export contributes to how the file is classified.

With the possible extensions mentioned above, we now have a measure of model interpretability for the ember model that will help us better understand why it classifies certain files as benign or malicious. Ideally, this interpretability feature could be implemented for other classifiers so that researchers in information security can quickly identify and respond to a security alert.

As shown through the ember model, interpretability provides more detailed insights about ML models. These insights will allow researchers to move past current ML black box predictions, thus highlighting the importance of model interpretability and transparency within ML models.