The very first email I opened as a fresh, out the box n00b here at Elastic, was a forwarded thread started by Shay Banon, Elastic’s CEO, about how we, as a community, need to make every effort to respect peoples’ gender pronouns.

This email was particularly important to me and the moment I received it is an event I’ve shared countless times, both internally and externally, since I joined Elastic in February, 2019. It struck a particular chord with me, being a trans non-binary* person, because ahead of my start date here, I resolved to remain stealth and use binary he/him pronouns** at work. This is different from my everyday, out of work life, where I prefer they/them pronouns.

It’s not that I feared the worst of everyone working here. I was certain that in a company of 1600 people, I was bound to find and connect with other LGBTQIA+ folks — we have a knack for finding each other. The panic came from the not-so-simple act of existing in the world as a transgender non-binary* person 99.99% of the time, when no one immediately recognizes my gender identity. In that moment when someone asks me what my pronouns are, I have to do the quick math, creating a cost-benefit analysis about the person, the situation, and my safety. The emotional labor toll of explaining my pronouns and making a snap judgment before I answer is what I find the most difficult. Particularly in professional settings, it’s usually easier for me to lean into the tried and true binary most people are familiar with because, honestly, it’s painful and frustrating to disclose that I'm transgender.

As someone who continues to fight for visibility, I sometimes feel forced into a reluctant teacher role. This was especially the case at my last job where I came out and began my transition journey. I was misgendered and dead-named*** on a daily basis by my boss, which didn’t make for a particularly inviting and open work experience and ultimately played a large role in why I left. 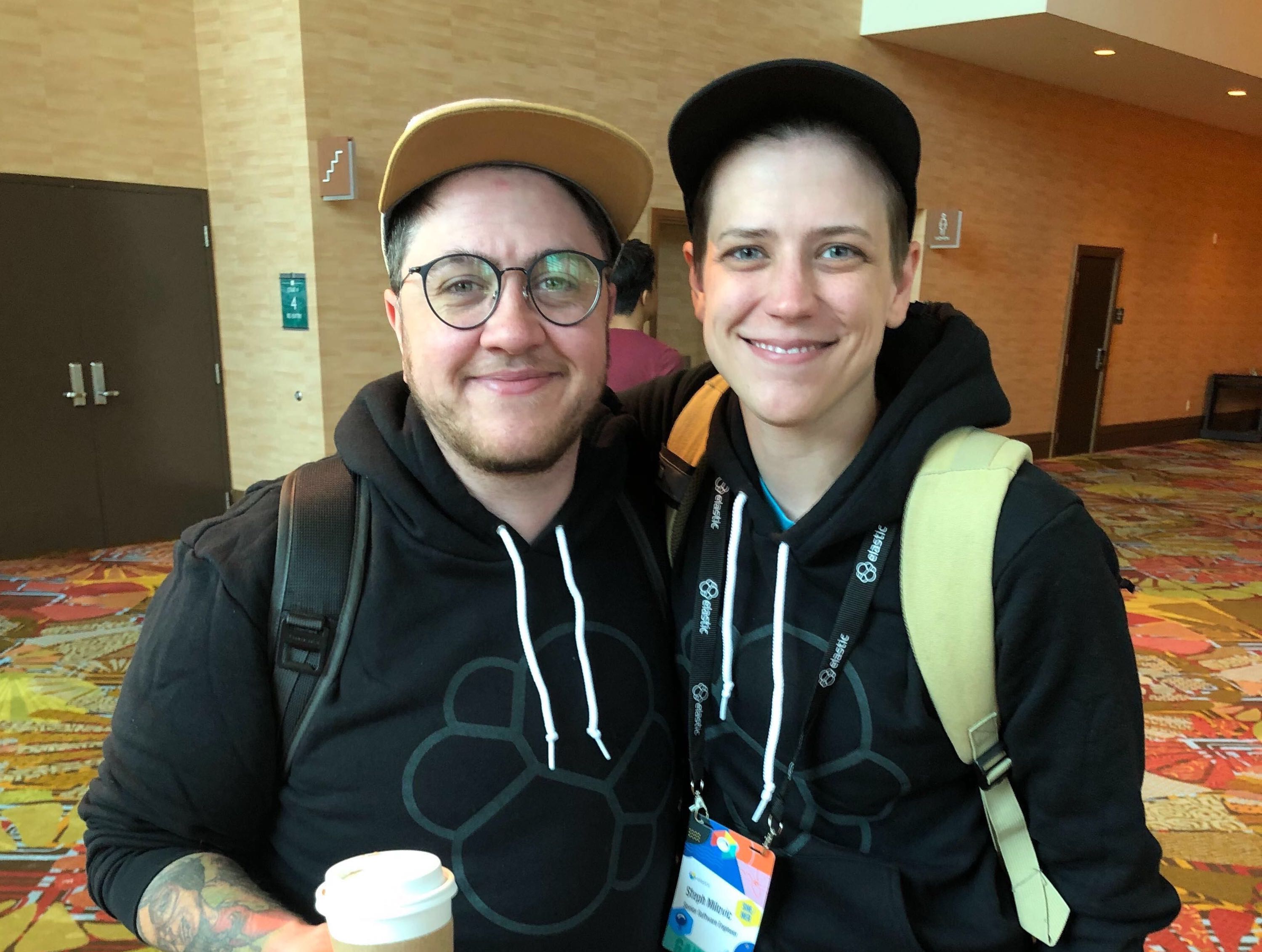 I steeled myself to the idea that I was going to try and be a regular cis-passing guy in my new role here at Elastic until reading the "Ze pronouns" thread about respecting pronoun usage created a tectonic shift in my entire approach to being my authentic self here.

Beyond the email, I found other kinds of belonging. At X-School (a week of training all Elasticians participate in) I was introduced to the Diversity, Inclusion, and Belonging group (DIBs) during Vice President of HR Leah Sutton’s presentation. I immediately joined the #dibs Slack channel. DIBs is Elastic’s internal initiative to make Elastic an open, welcoming, and intentionally diverse and accountable community. Of course, we hear about these sorts of programs and the obligatory buzzwords thrown around at most any progressive-leaning organization, so its mere existence didn’t mean Elastic as a whole was doing anything out of the norm. It took some digging and reading to really understand that fundamentally, Elastic recognizes the real marker of its success as a company is measured by the health, wellness, and openness of us, the Elasticians. Elastic is walking the walk.

As a visual designer, fortuitously, I was tasked with creating a sticker set for our Global All Hands (GAH) event in Orlando that specifically represented and supported the DIBs initiative. The hoop to jump through in creating these was wide, and I dove right in with the support of many members of creative services, HR, and the DIBs Slack channel. It was interesting to sit in on those meetings and listen to the sensitivity and sincerity expressed by everyone. A lot of times, when people know there is someone with a marginalized identity in the room and the topic of inclusion comes up, they tend to be on their best behavior and say all the right things. However, it gets interesting when they think no one is listening or there aren’t stakeholders present. I was impressed and encouraged by the amount of consideration and care that came out of those conversations. It didn’t come off in a virtue signaling, self congratulatory way either: the sentiments were genuine and sincere. 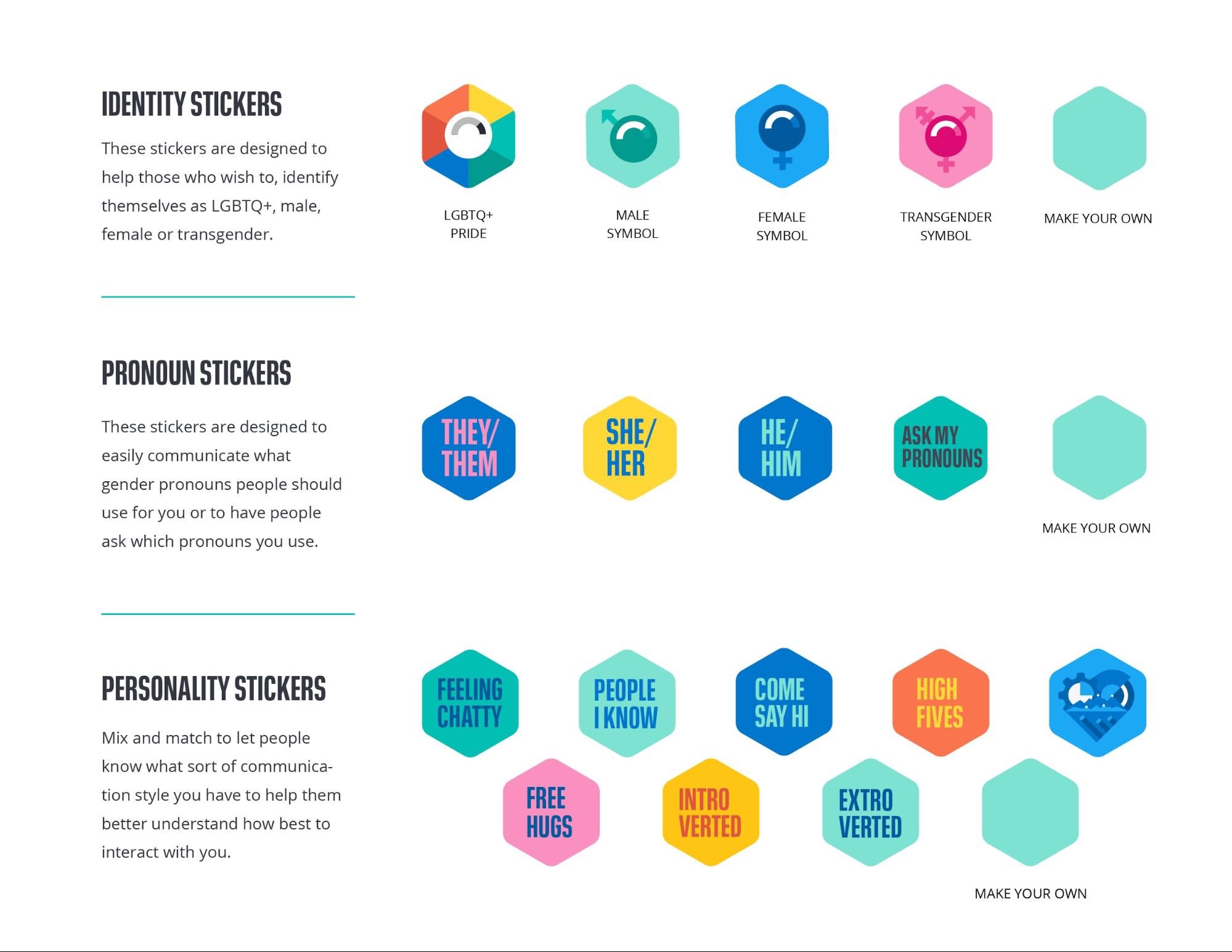 We knew that we needed identity stickers, such as, yes you guessed it, pronoun stickers (He/Him, She/Her, They/Them, Ask my pronouns), gender identity stickers (Male, Female, Transgender, etc.), and stickers to gently signal differences in neurodiversity (I’m feeling chatty, only people I know, come say hi, introvert, extrovert). Those seemed like obvious stickers to include, though in the future I look forward to expanding this to include even more underrepresented identities.

The question of how to speak to a global Elastic audience was one we took some time to really consider. A sticker the size of a coin isn’t a lot of room to work with. Eventually, we landed on writing “hello” in a variety of languages to represent the diversity of our ever-growing team. We started with 10-12 poorly translated greetings (thanks to Google) and from there, I enlisted the ENTIRETY of the DIBs channel to help me ensure cultural correctness and expand the list to include, well…everyone at Elastic. After more discussion, it became clear we needed a bigger boat…errr…. Google Doc (at the suggestion of our CEO, who I found out low-key follows the DIBs channel closely ::heart burst emoji::).

It was encouraging to see how quickly and enthusiastically my fellow Elasticians added suggestions and comments to the doc. The response was overwhelming and exciting. By the end of the first day, the list grew from 10-12 salutations to somewhere around 50 languages, some with multiple versions of their native greetings, depending on usage, formality, and region. Seeing the breadth and diversity of who makes up Elastic right there, in black and white, was quite amazing to behold. It drove home that we all have something to give to this community of global Elasticians. I learned things like "¿Que Tal?" as a greeting is not as widely used informally in Spanish speaking countries as my 8th grade Spanish teacher made it seem like. Or, that there is a language called Esperanto invented in the 19th century, popular amongst engineers. I was able to video chat with several Elasticians about the many Indian languages (including Hindi, Tamil, Telugu, Kannada) that are represented at Elastic, and the nuances between how you write "Hello" in Russian and Ukranian. 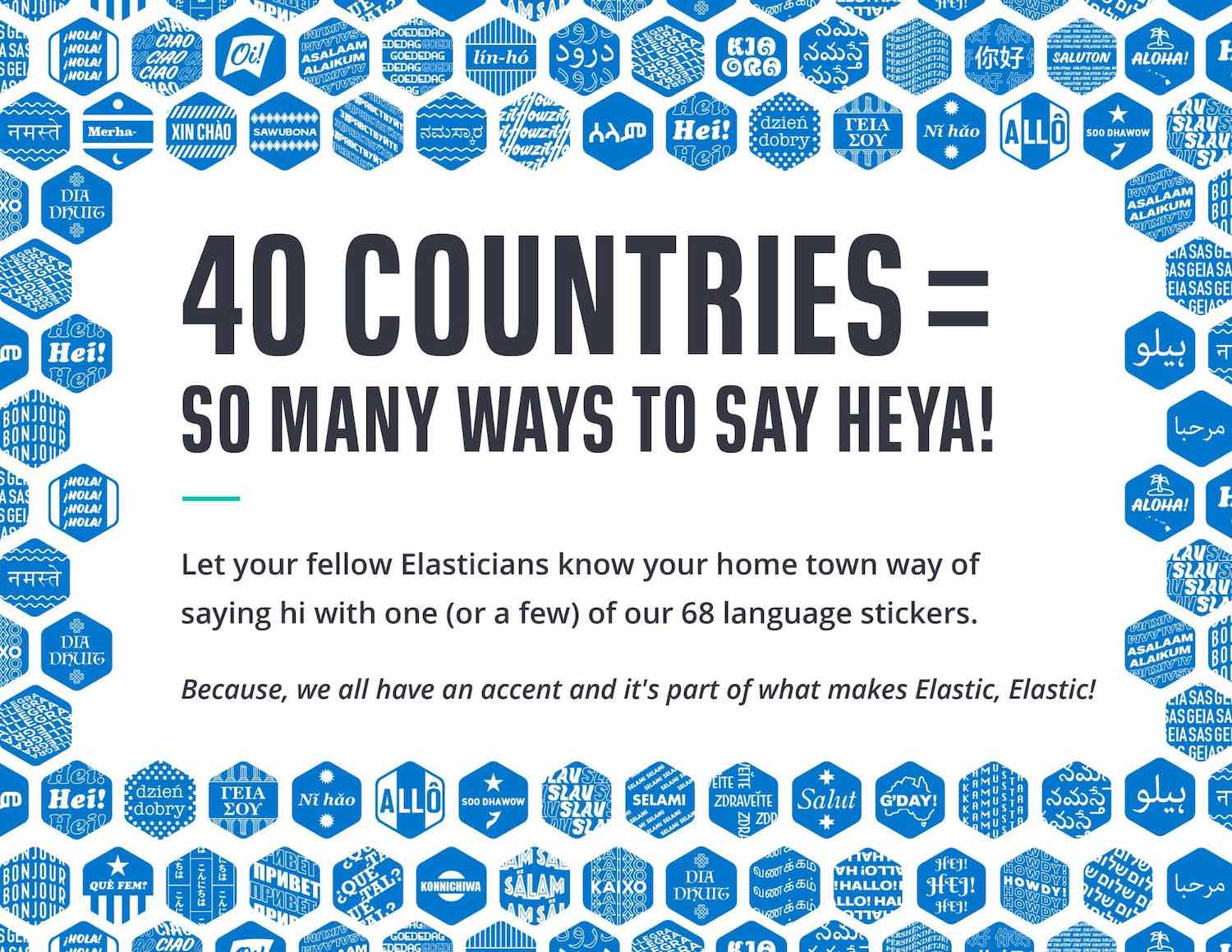 All told, we shipped 85 individual DIBs identity and language stickers (and one cute little data viz heart because…why not?). Without the collective efforts of many members of the Elastic community, these wouldn’t have been the enormous hit they were at GAH. It gave me the deepest level of personal and professional satisfaction to see grown adults digging through giant bowls of tiny stickers looking for the combination that perfectly represented them. I loved hearing what people were saying amongst each other about the stickers, seeing them traded like pogs (am I dating myself?), or witnessing the excitement of someone finally finding that one sticker they helped bring into existence.

Throughout my career, I've had the privilege of working on some amazing projects with tremendously talented designers — work I'm still very proud of today. That being said, I can say without hyperbole that being involved in the creation of this sticker collection and witnessing people’s unabashed excitement first-hand is, to date, the most rewarding and memorable moment in my professional design career. Months later I still get pinged about the stickers: if more will be created in the future (I CERTAINLY hope so!), where they can find them, and if they can be made open-source so people can use them elsewhere.

I feel honored to have been trusted to make something so many felt so personally invested in; something that felt personal to me. It was also an honor to witness that as a community, Elastic gives a heck and it’s not just empty rhetoric. From DIBs and Our Source Code, to hearing from the very top leadership that above it all, we have to continue to keep pushing, keep growing, and keep gently holding ourselves accountable, is what makes Elastic a special community: one I feel especially grateful for, but even more than that, safe to be a part of.

Are you interested in showing your support to the transgender community this November in honor of Transgender Day of Remembrance (#tdor)? See the organizations Elastic is supporting and make your contribution today.

*** Deadname: A deadname is the birth name of someone who has changed it. The term is especially used in the LGBTQ community by people who are transgender and elect to go by their chosen name instead of their given name.