Dimensions of the Ballerina in the Age of Technology

Last March, we opened our annual Elasticsearch user conference with an unconventional ballet performance. We wired up a ballet dancer with accelerometers and an EKG and visualized her biometrics using Elasticsearch and Kibana in real time in front of a live audience. (More on that in this blog post.) The following captures the perspective of ballerina and choreographer, Sarah Cecilia Griffin, who worked closely with the project’s designers, engineers, musician, and seamstress.

I am a dancer who enjoys a challenge. I’ve spent most of my life perfecting the minutiae of the narrow and disciplined language of ballet, honing my skills in order to ask different questions and explore new possibilities on stage and off. Lately the question is: where does innovation originate in the creative process? The need to innovate looms large in the minds of dancers and choreographers in the contemporary dance landscape, and the concerted effort to create something truly “new” can push and stretch artists beyond our comfort zones. I find that the most groundbreaking work happens in the intersection points between disciplines—in the sharing of languages, skill sets, and perspectives. As a dancer I have worked with and learned from artists of varied disciplines and backgrounds to create collaborative performance art that feels completely new to all of us. Working on the creative team for Elastic’s “Ballerina” presentation was an experience unlike any other in the breadth and scope of cross-disciplinary collaboration.

Last fall I was contacted by Issac Kelly (designer and engineer) with the conceptual skeleton of the project, and I was immediately intrigued. The Bay Area is a major hub for both arts and technology, and I have often wondered why the two don’t intersect more often. I’ve always been a nerd for science and technology, and I enjoy exploring dance and movement from new and different perspectives. For me, dancing exclusively for dancers, with dancers, and around dancers all the time creates something of a feedback loop in which innovation and risk-taking can stagnate. This project struck me as an opportunity to be a creative leader and collaborator in a completely new environment. 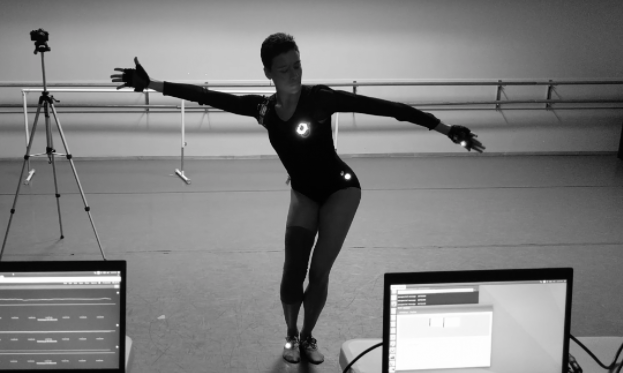 Sarah wired up at a rehearsal in February 2017, practicing movements as they're visualized in the Elastic Stack.

I came into the process a few months after Issac, Kat Meler (art director), and Crystal Titus (costumer design) had started developing functional hardware and production design with the Elastic team. This would be my first choreographic commission, and it was helpful to start with some established concepts, parameters, and goals. At our first team meeting in Issac’s workshop I had a chance to test out the prototype accelerometer wristbands with Kibana and connect movement to visualization. It was a lot of fun to play around and see my movements projected into data points and graphs in real time. I experimented with motions in all planes, varying speed and size. I was most captivated by the way the software captured movement so dynamically. I could execute the same basic movement with a small shift of energy—fast vs. slow, smooth vs. sharp, large vs. small—and see a significant change in visualization.

In early January I began sketching out choreography alone in a studio at ODC Dance Commons in San Francisco. I had four basic tasks to demonstrate: accelerometers on the hands, feet, and hips, and infrared heat map tracking. I chose to work with basic classical ballet vocabulary in order to create clear, recognizable, and repeatable movement sequences. Without the hardware and software on hand, I could only work from memory and imagination. I began by creating a gestural language as a basic framework from which to build more complex movement. These small gestures of the hands and feet on linear planes could essentially teach the audience to read the movements and visualizations together. I began to deconstruct the grammar of the ballet language my body speaks so fluently, distilling movements down to their basic planes of motion, acceleration, and g-force. These basic elements could then be combined and recombined with increasing complexity to tell a story about how movement can be seen. I didn’t have to create mind-blowing complex choreography; I could use classical language to speak in a completely new way. 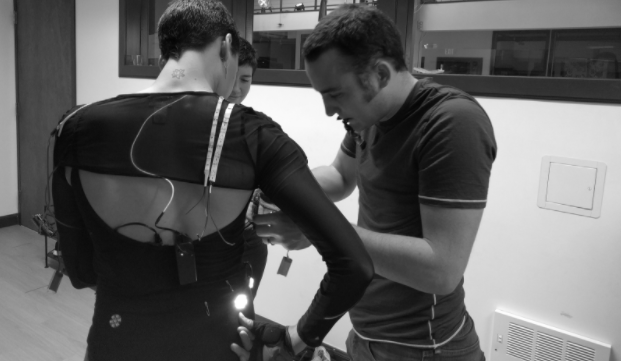 Issac Kelly (right) adjusting hardware on Sarah's costume at a rehearsal in January 2017.

I spent the first month creating alone, demonstrating and experimenting in team rehearsals, and editing from my and the team’s notes and observations. The gestural language solidified and informed the more complex movements. Basic barre work became beautiful spikes, scribbles, and waves in the Kibana graphs. I tested out every type of turn and spin I could think of, and was sometimes surprised at what read best in the visualizations. Possibilities opened up more and more with each rehearsal, and I found myself wondering in the middle of ballet class how a frappé would look next to a developpé or a rond de jambe en l’air, or how the arc of a soaring grand jeté might contrast with the quick flurry of a petit jeté battu. My only limitation was not being able to see the Kibana graphs in real time as I danced my choreography, so I had to trust the feedback from the creative team and make adjustments accordingly.

Creative input continued to pour in from all sides. Uriah Findley (composer and musician) went through several rounds in composing and editing the music, and I would take long walks to count out phrases, partitioning and rearranging my choreographic assignments into the natural rise and fall of his composition. I wanted the music to express the curiosity I felt in blending classical art and modern technology, and Uriah had a keen sense for building excitement and complexity into the score just as I was doing with the choreography. Issac, Kat, and Crystal came into each rehearsal with batteries, sensors, wires, and lights sewn into pockets and onto straps and gloves in new and sometimes haphazard ways, making adjustments for form and function as things malfunctioned, broke, or flew off my body in motion. Attaching hardware to the feet was the trickiest part of the costuming, and it took a few experiments before we honed in on how to attach the accelerometers to a relatively inarticulate part of the foot that would allow for normal range of motion for both the foot and the specialized hardware of the pointe shoe. In these collaborative efforts I found myself drawing from all sides of my experience as an artist, and it was very rewarding to contribute to more than just the dance aspect of the performance. Our teamwork became cohesive and fluid as we learned and acquired each other’s languages—dance, technology, engineering, music, and design—and it was clear to me that this performance would be unlike any other. Sarah shows ballerina Kelsey McFalls how the accelerometer-based gloves work as they wirelessly ship data to Elasticsearch for visualization in Kibana.

During this initial period of development I was working through a long- term injury, and by February it became apparent that I would not be able to dance in performance for Elastic{ON}. This was of course a disappointment, but it turned out to be a perfect opportunity to fine tune many elements of the project. My good friend and collaborator Jamielyn Duggan joined the team as the performer, and just explaining the concepts to her in our first rehearsal got my wheels turning in new ways. My choreography was still developing, and we worked together to find steps and sequences that worked for her body and for the visualizations. Choreographic possibilities opened up in the next team rehearsal as I was able to see the dance and visualizations simultaneously for the first time. The software essentially took notes for me, and I was able to tell Jamielyn very specifically how to adjust the dynamic, speed, or shape of a movement in order to create the clear and accurate visualization feedback. With each run through, the patterns in the graphs became more and more recognizable and repeatable, to very satisfying effect. Music and costuming were finalized and our team product was taking definitive shape. By the time Jamielyn hit the stage for dress rehearsal I was able to sit back and watch the dance unfold on stage and screen. As I sat in the audience for the performance, I imagined myself seeing everything for the first time, and it was informative, entertaining, and magical all at once.

My takeaway from this project is huge, to say the least. I continue to think about how this type of technology can be used in dance and beyond. Can graphs be used as a training tool to track movement efficiency and enhance a dancer or athlete’s ability to accurately recreate a motion in its purest form? How do different bodies register the same movements, and how can rules and patterns for movement be created? How can movement visualizations enhance or become integrated into dance and music performance? Can data points and graphs become art? Can art truly be captured by technology? These are some of the questions I will keep with me in my journey as an artist and risk-taker.

Learn more about Elastic{ON} and view the ballerina performance in the opening keynote presentation.