This week two new hires joined the new platform project and we had an official new platform team kick-off meeting. For the next two to three weeks, the team will be focused on making  modifications of the already completed platform services/components. Plugin migration plan is WIP. We also met with Kibana app team to discuss some migration tech details.

The security team continued working on integrating feature controls into the saved objects management, and the infra applications. Additionally, some small modifications were made to the CSP which will be implemented in Kibana 6.7 to allow Edge to continue functioning properly.

With the changes to the saved objects service merged and backported the Secret Service is all ready for review. https://github.com/elastic/kibana/pull/28894

This week was spent working on the design of the actions service and vetting more details about how it will work. Some work has been done on a couple of main use cases. An RFC proposal is currently being created with a more detailed design. Will send out a follow-up when it is in a PR for review.

This week we finalized the development of the export API and continued working on the new import API.

Working through resolving an issue with the upgrade assistant re-indexing of security indices (elasticsearch#39284). These indices are whitelisted, so the decision has been made to stick with the naming convention created in the 5.6 upgrade assistant (.security-X).

The Canvas team continues to work on performance and stability in the march towards GA. We’ve long suspected that React was thrashing and killing in-browser performance, and that’s where a lot of the perceived slowness was coming from. This week we confirmed and fixed one of the largest issues, where the entire workpad, all pages, and all elements, would be re-rendered for all sorts of crazy reasons, like even moving your mouse. You can see React thrashing in this flame graph 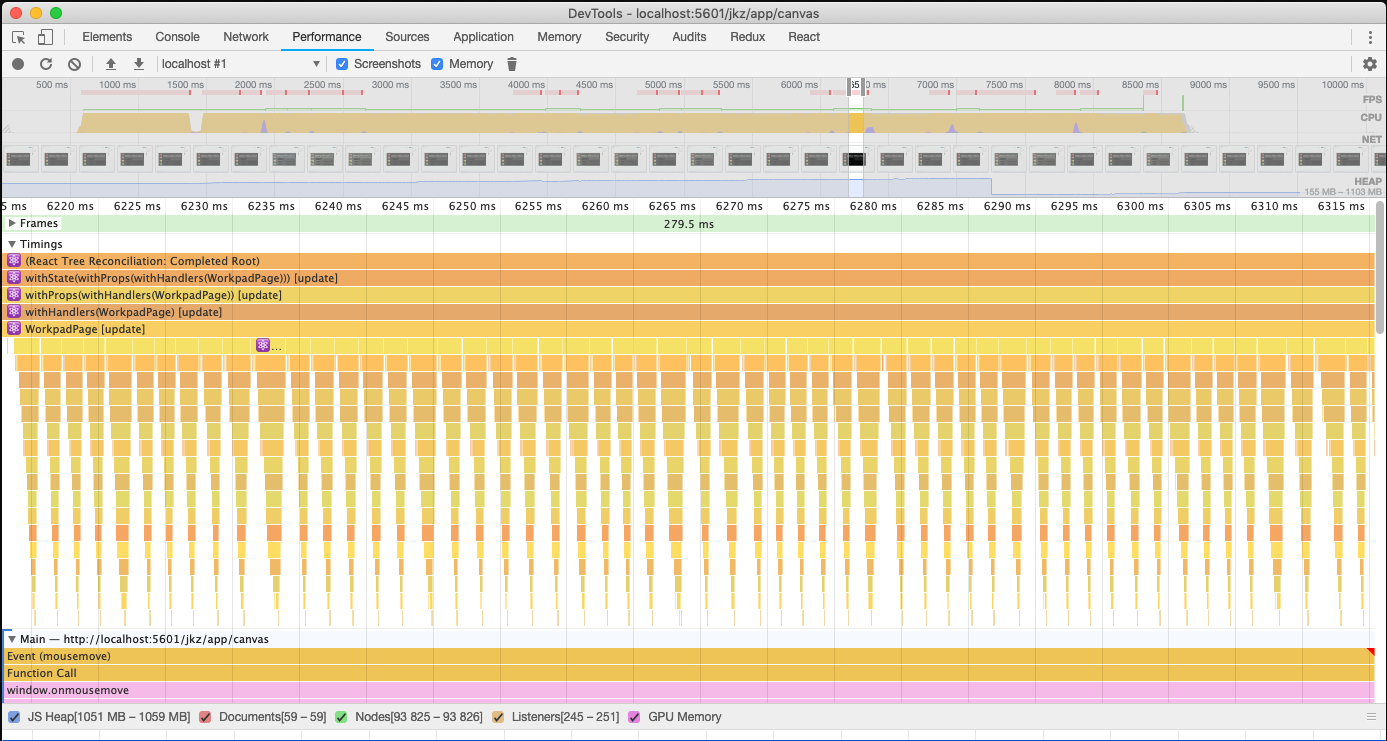 With a little bit of code to make things smarter about re-renders, that same graph now looks like this: 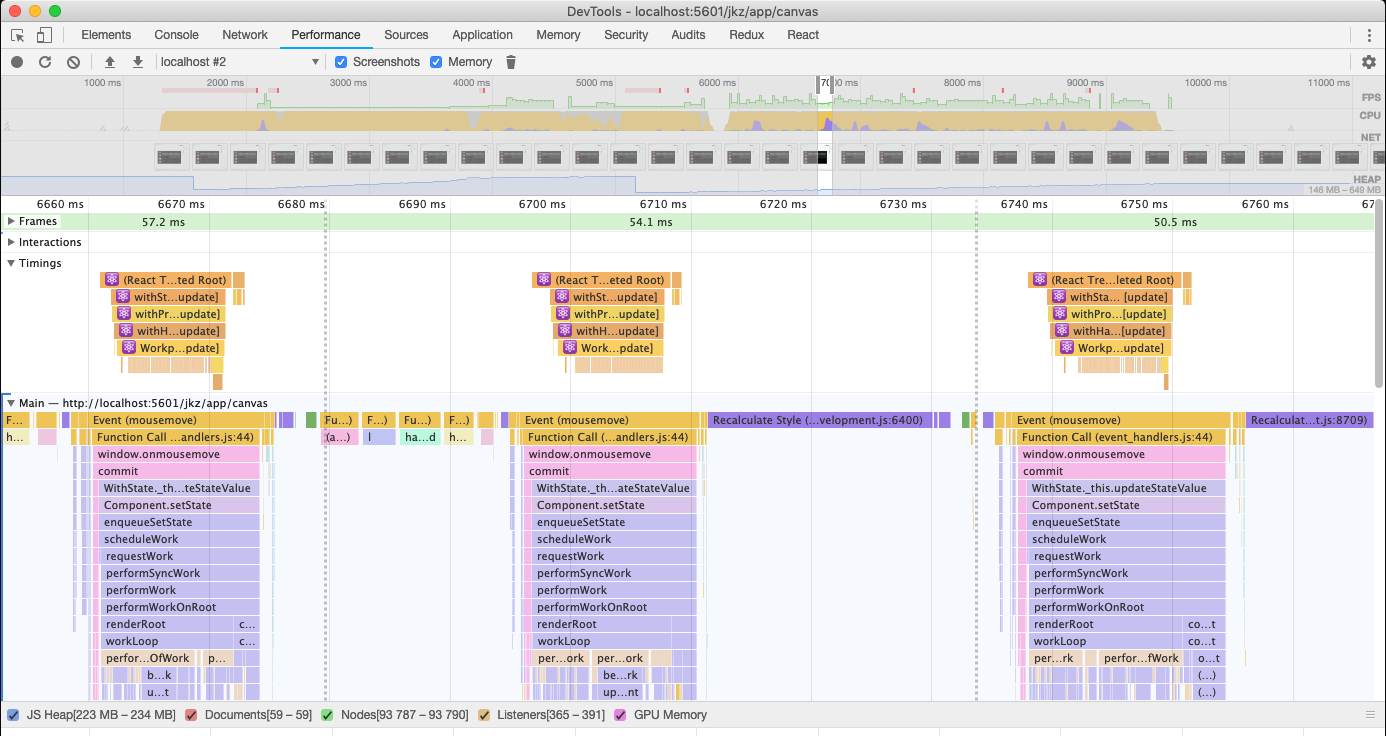 We’ve also been seeing EventEmitter memory leak message recently, and that’s now been fixed. Here’s a before and after of the memory profile:

But it hasn’t been all bug fixes. For example, the essql function got time_zone support this week:

Demodata now functions with the time filter, and the data was updated so you always have current data to play with and includes a @timestamp field so adding a time filter works from the start:

We added content to the help menu for 7.0+, including a hotkey guide: 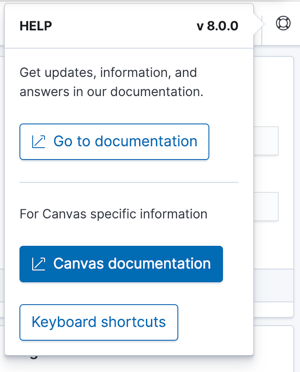 Simplifying the code around the Layout Engine: Canvas is a presentation editor like Google Slides or Powerpoint. It supports lots of stateful interactions like rotation/move/resize, snap, grouping etc. going beyond regular UI, things like align/distribute and 3D planned.

Processing user interactions and rendering their results must be done fluidly, 30-60 times per second. Therefore the layout engine now updates a separate, fast, plain state object, not the Canvas Redux state with ES indices etc. attached. But maintaining and synchronizing this with the central Canvas state is error prone, hindering feature development, fixes and perf improvements. Now a silo, it's being converted to stuff all developers use, eg. React component props/state and Canvas state.

The WIP work simplifies the state management (we're targeting this for 6.7 though it's not a prerequisite):

It becomes even more compact around 10kB - the somewhat comparable react-beautiful-dnd which would cover a small fraction of what’s needed (and things Canvas doesn’t need) is 108kB minified.

The design team is finally recovering from the 7.0 sprint.  7.0 isn’t yet over for us yet though, and we’re still working through some dark mode cleanup and polish work for the Uptime app and global datepicker component. On the EUI front we finally closed our some pesky issues around focus traps and portals within modals. We’re also working towards our final CSP solution and have a bunch of fixes / additions for the range slider, filter group, and icon components. Last but not least we’re slowly making progress on converting EUI to Typescript. Phew… there’s a lot going on!

Working on some new homepage designs that lead people towards guides 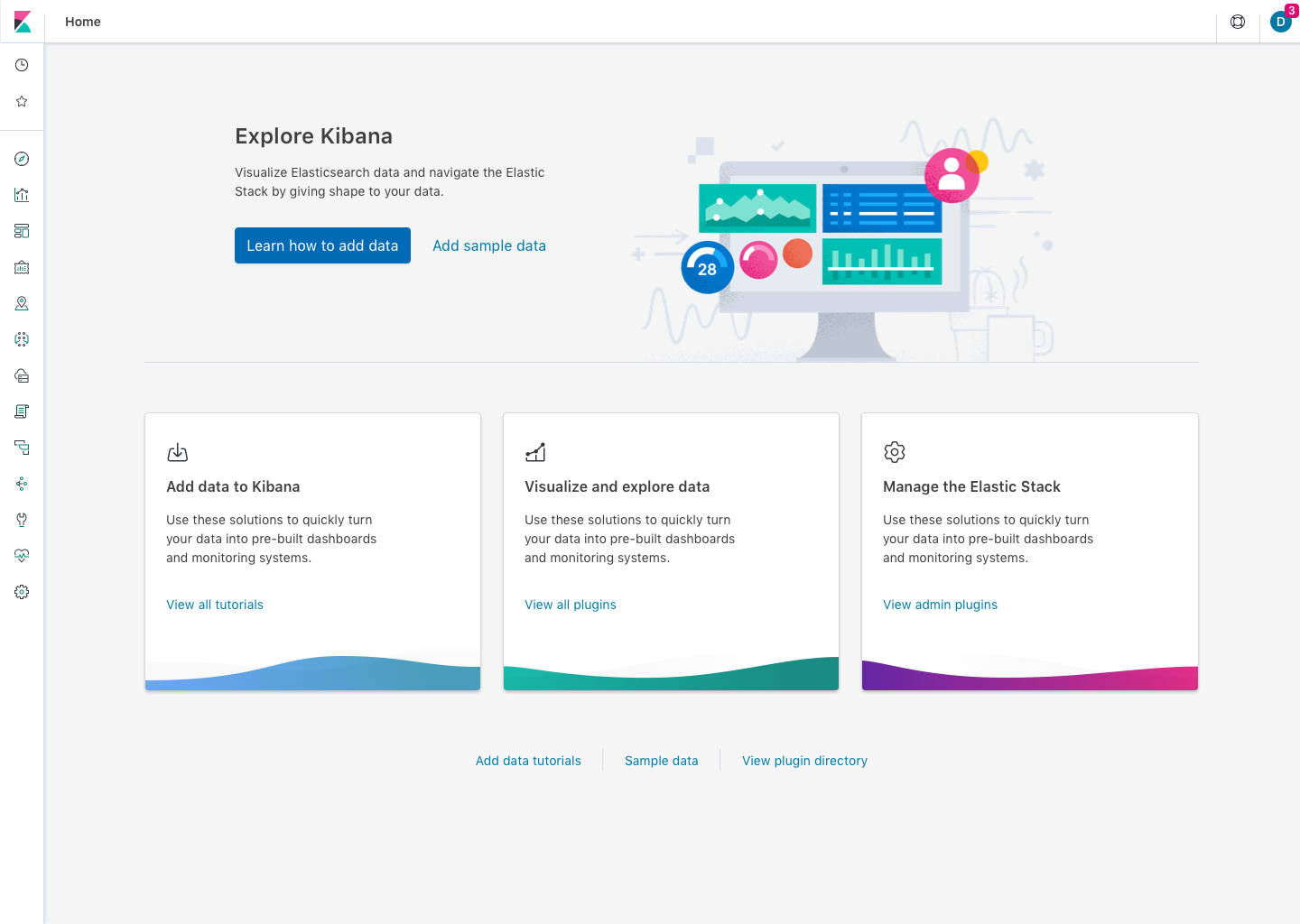 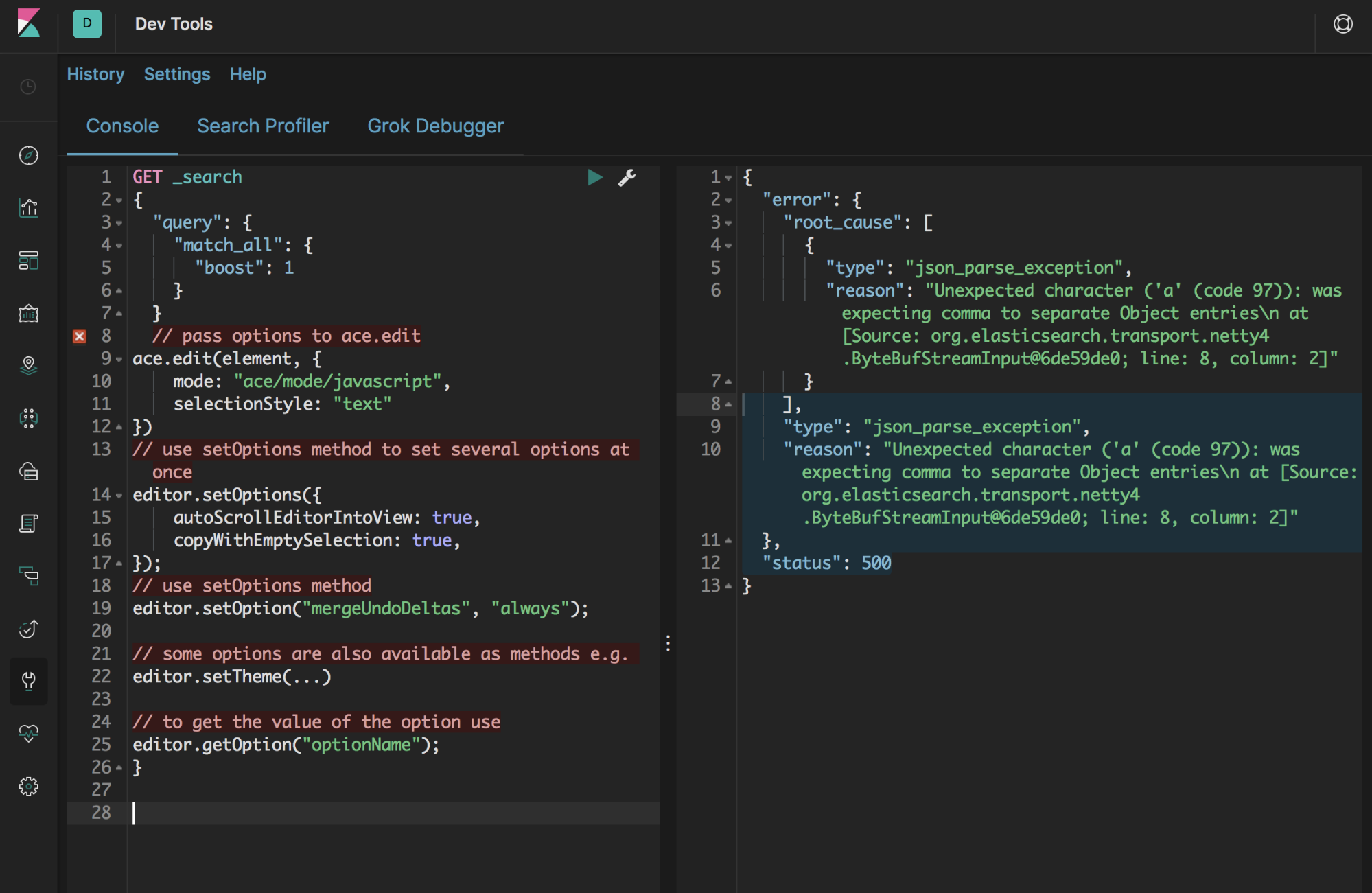 Uptime app getting some cleanup 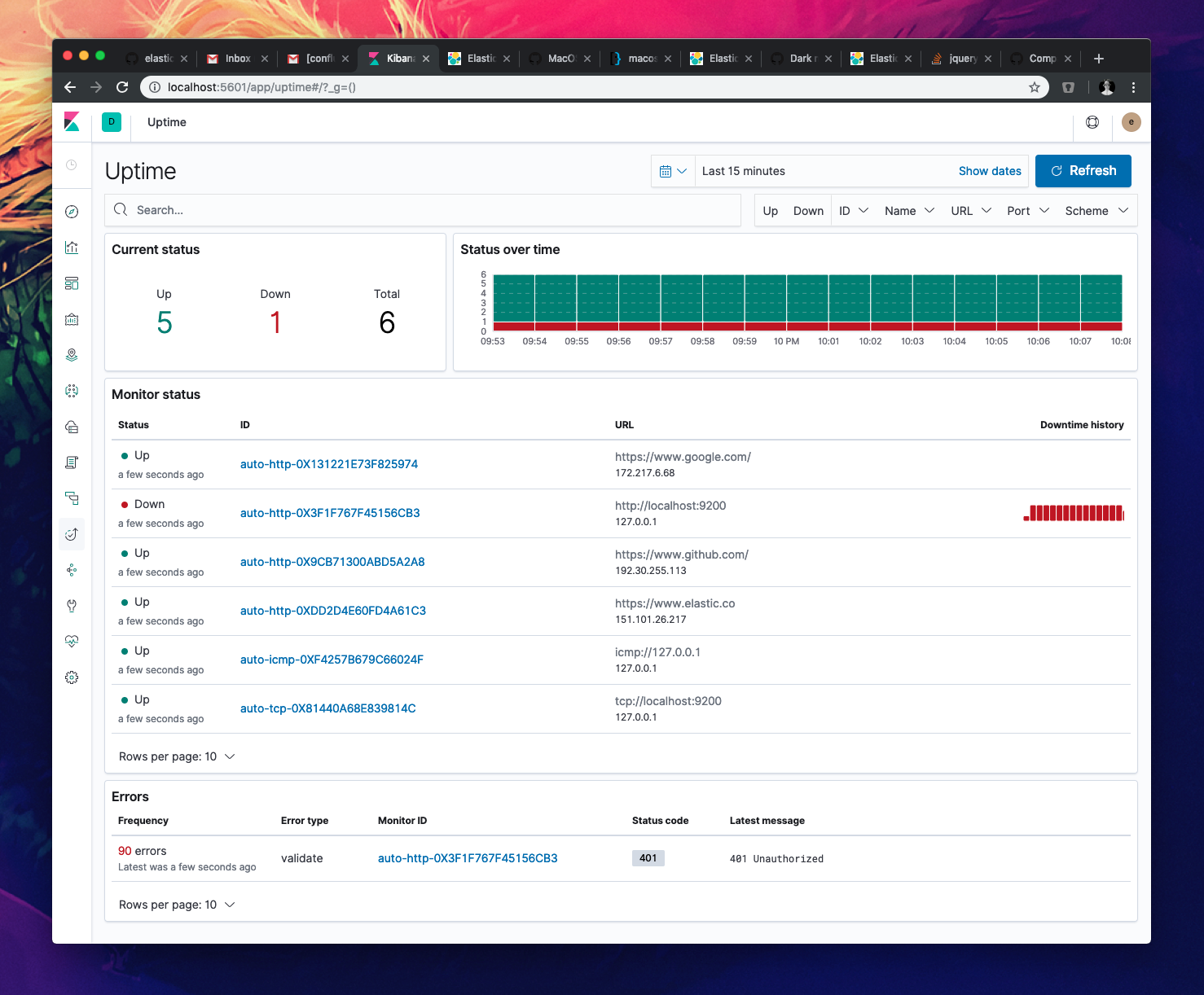 Our priority has been on resolving blockers with the upgrade process as they arise.

The team focused on testing 6.7.0 release

The team is still stabilizing the 7.0 release by fixing several bugs, converting remaining UI to the new design (e.g. the create new visualization dialog) and implementing minor enhancements (like copy buttons for request/responses in the Inspector or better human readable labels in the Advanced Settings).