With the 5.5 release of the Elastic Stack, we're proud to announce the first beta release of the Windows Installer for Elasticsearch. This first release is the culmination of a collective effort to provide a native installation experience for Windows users getting started with Elasticsearch, in addition to providing a friendlier distribution for scripted installations.

NOTE: The Windows Installer is a beta release and as such is not yet recommended for production use. We are looking to GA the MSI as soon as possible.

Since the beginning, Elasticsearch and the rest of the Elastic Stack have fully supported cross-platform deployments, allowing developers to run Elasticsearch in production, irrespective of whether their environment of choice is a Linux distribution or a flavour of Windows Server.

The humble .zip package ships both batch and shell scripts to start a single Elasticsearch node on Linux, Mac or Windows, with a sensible default configuration to get you started. This is great for getting started but we can do better on Windows!

For those unfamiliar, MSIs (Microsoft Installers) or Windows Installers as they are also known, are packages used for the installation and maintenance of software on Windows. They're a mature technology for performing transactional installs and uninstalls of software, with the ability to easily manage upgrades to newer versions. In addition, Installer packages can be digitally signed to help authenticate the identity of the creator, providing confidence in the integrity of downloaded software.

Most importantly, the getting started experience for those new to Elasticsearch on Windows is much improved with a Windows Installer, providing a modern graphical user interface (GUI) to guide the user through the installation process: 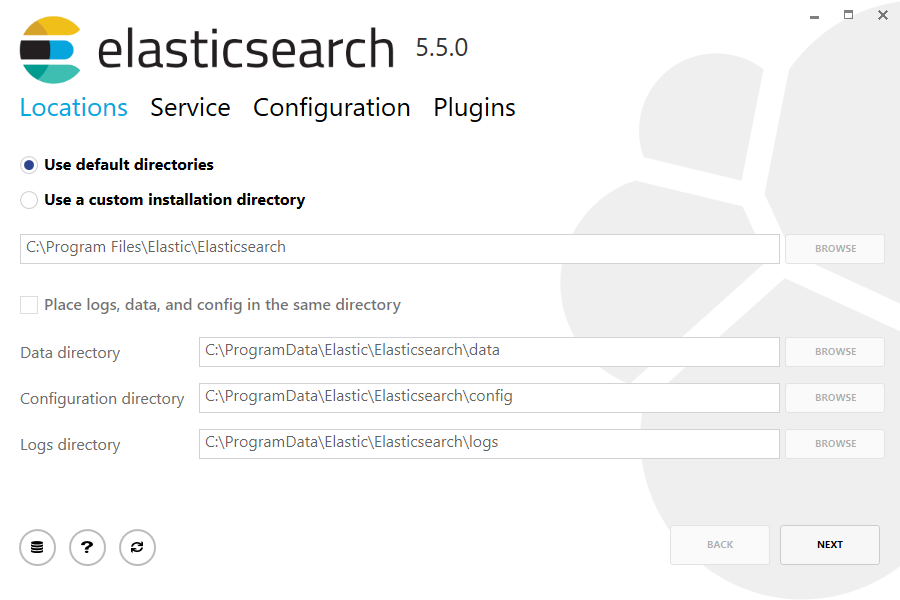 Each step within the process provides contextual help for each displayed input: 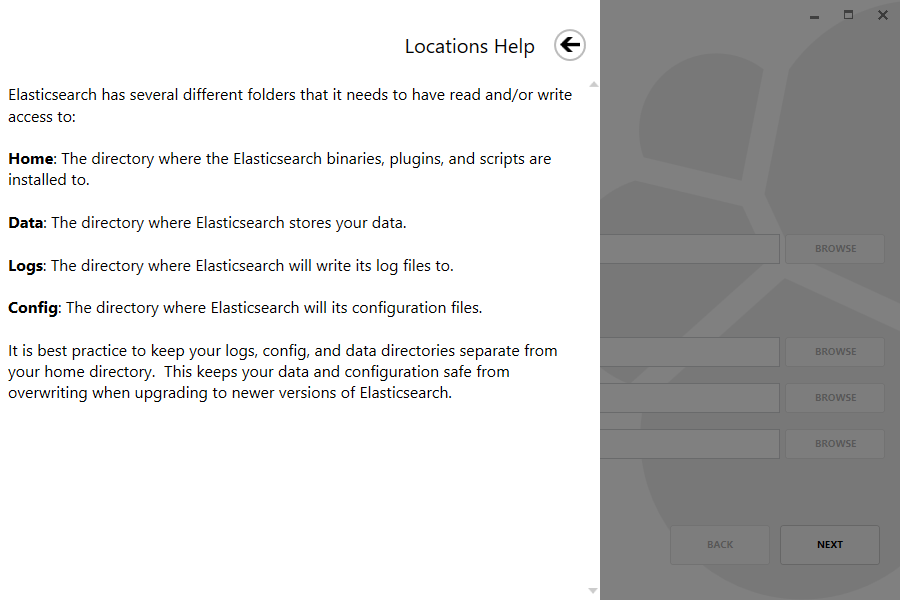 And the interface exposes common configuration options, allowing changes to configuration files to be handled at installation time: 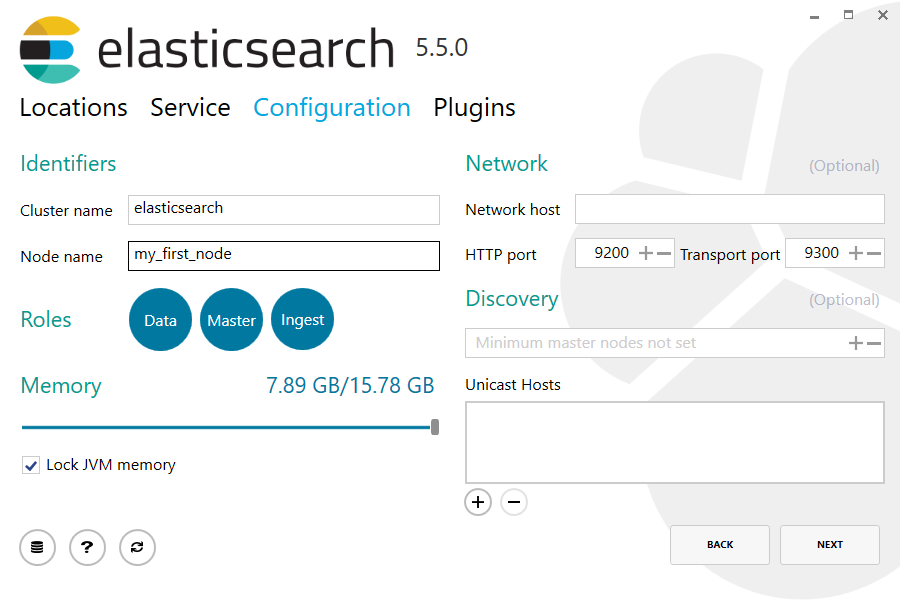 Further, the installer takes care of installing Elasticsearch as a Windows Service: 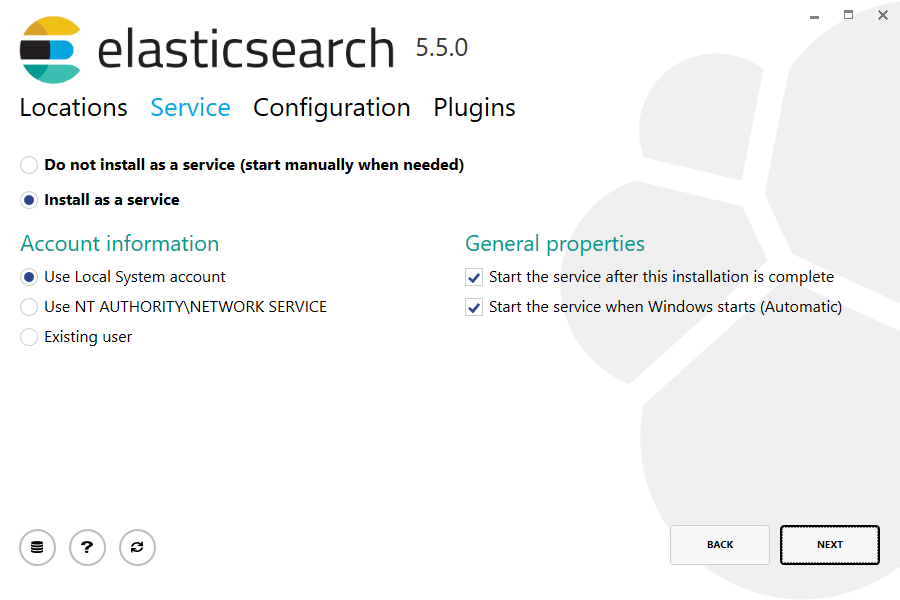 Finally, common Elasticsearch plugins can be downloaded and installed at the same time as installing Elasticsearch: 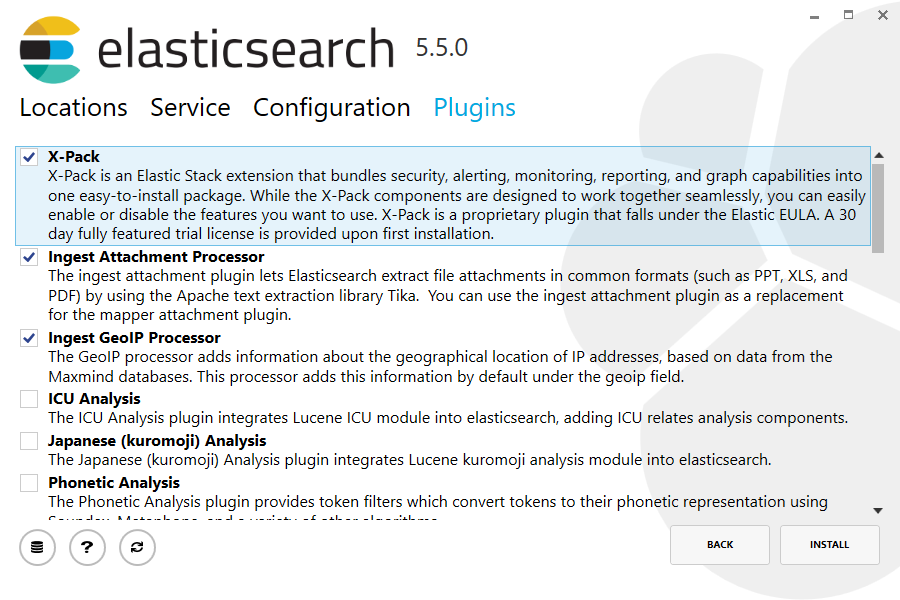 The interface offers to download and install commonly used Ingest GeoIP and Ingest Attachment processor plugins, as well as offering our popular X-Pack commercial extensions to the Stack, for example.

Windows Installers are great for providing installation GUIs but they are equally at home for silent scripted installations. All of the inputs provided within the GUI are also available as command line options for automated deployments. Running the installer from the command line with the defaults is as simple as

The Windows Installer package includes an elasticsearch.exe executable that takes the place of the elasticsearch.bat batch script that ships with the zip archive package. Besides being digitally signed and supporting all of the command line options available that the batch script does, the executable also prints messages to standard output in colour, making it easier to see what's going on whilst developing against Elasticsearch: 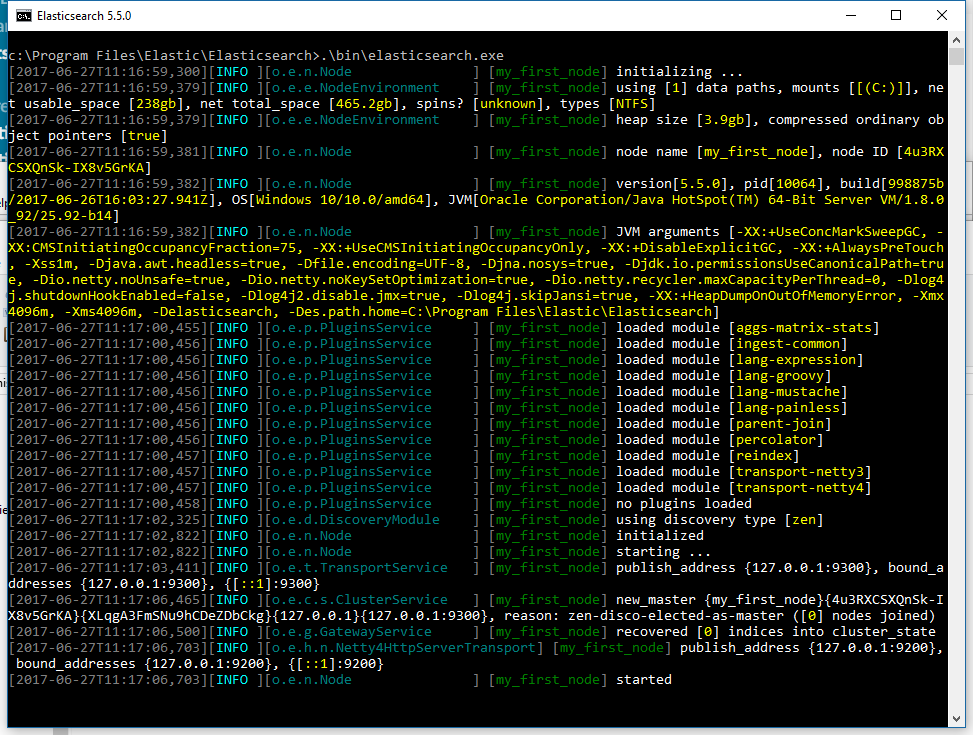 Furthermore, the executable does not require explicitly setting a JAVA_HOME environment variable pointing to the bin directory of the Java installation; the executable can find an installation of Java to use from a number of different places. In order of precedence:

The advantage of picking up the location of Java from the registry is that one no longer needs to remember to update JAVA_HOME environment variable after installing an upgraded version of Java.

The development of the MSI would not have gone as quickly or as smoothly without being able to leverage existing Open Source toolsets, libraries and packages. We'd like to give particular shout outs to the following awesome projects in particular:

We'd love to get your feedback on your installer experience; please take it for a spin and let us know if you run into issues. For future, we're looking to leverage the Windows MSI installer for our chocolatey package and other package managers for Windows.

To be clear, we have no plans to remove the .zip distribution in the future for Windows, so if this is working great for you already, rest assured you can keep doing what you’re doing.

For our Microsoft fans, now you can deploy Elasticsearch using any of your favourite methods; from Azure ARM templates, to on-site MSI installs, to old-fashioned portable zip files, Elastic's got you covered!