CSG International is a multinational corporation headquartered in Greenwood Village, Colorado. Although historically a cable and satellite billing company, in recent years CSG has sought to expand into the digital services realm. In 2015, CSG launched Ascendon, a cloud-based platform that helps companies offer digital services — from live-streamed sporting events and concerts to seamless shopping experiences — to consumers.

At Elastic{ON} Tour Denver in October 2018, CSG Executive Director of Operations Lori Kevin highlighted how moving first to the Elastic Stack and then to Elastic Cloud Enterprise (ECE) improved scalability, reliability, speed, and flexibility for Ascendon.

Initially, Ascendon’s multitenant platform was based on a private data center with production nodes in North America and Europe, where different business units (i.e., customers) resided together. All the data they collected was stored in relational SQL databases. But as Ascendon’s user base expanded and data volumes grew, problems with the system emerged. Querying the millions of data points in the SQL databases was painfully slow, forcing the Ascendon Operations team to spend hours optimizing queries. Without a single dashboard showing key metrics side by side, it was also difficult for the Operations team to understand target performance thresholds. And issues such as downtime during upgrades and inflexible reporting formats were causing customer complaints due to poor end-user experience. The Operations team realized that many of these problems associated with monitoring, maintaining, securing, and reporting on all of their customers’ data were, fundamentally, search problems. This led them to the Elastic Stack.

On the monitoring side, pulling their data out of the SQL databases and indexing it in Elasticsearch instantly improved the Ascendon Operations team’s ability to monitor activity across the platform. With Elastic, they were able to review API response times, identify usage trends, and analyze poor performance for greater insight into solutions. They began using Metricbeat to collect CPU, memory, and other health data, which they then visualized in Kibana dashboards. Visualizing this information not only allowed them to assess specific stats, but it provided a unified perspective, ensuring everyone involved — from operations folks to developers to QA testers to service team members — was looking at the same information. These dashboards proved so valuable that they now function as organization-wide resources for solving problems on the platform.

“[I]f a ticket gets entered by a member of our services team, the first question that is asked by a member of operations is, ‘Where’s the Kibana link that shows me the errors that you received at the time?’ So it’s really been a game-changer for us on the monitoring side.” Lori Kevin, Executive Director of Operations | CSG

Ascendon also used Elastic to streamline the maintenance of their data platform to ensure it was always available and optimized for the best customer experience possible. To keep their customers happy, Ascendon needs APIs that never die — what they affectionately refer to as “zombie architecture.” Previously, mandatory quarterly upgrades to the Ascendon platform required hours of downtime, as transactional data was stored in databases and system activity needed to be limited while schema changes were instituted behind the scenes. By moving most of the schema requirements out of SQL and into Elastic, the Operations team was able to reduce downtime to just minutes — short enough that many users wouldn’t even notice an interruption. In the future, the Operations team hopes to leverage Elastic to do away with the need for downtime during upgrades altogether.

Improved security was another benefit of moving to Elastic. The Ascendon Operations team is constantly working to ensure that threats or potential threats to the platform are quickly identified and eliminated. Before adopting the Elastic Stack, the Operations team mostly relied on reactive and manual processes for identifying and blocking threats. With Elastic, they were able to make this process more proactive and automated. They scored an early win by using the alerting features of the Elastic Stack to set up automated alerting on specific types of events. However, because each of Ascendon’s customers has unique traffic patterns, a one-size-fits-all approach wasn’t ideal. That’s where Elastic machine learning features came in. Machine learning enhanced the Operations team’s ability to quickly detect different types of fraudulent activity and take action to block it.

Ascendon was able to expand their reporting capabilities with Elastic, too. This was critical for the company, as their customers need to report on and analyze their business performance data. Reporting using the previous relational database solution was time-consuming and inflexible. This all changed with the Elastic Stack. By removing relevant data from the relational databases and putting it into Elastic, Ascendon Operations has been able to quickly retrieve and visualize relevant information. “It’s been a huge win for us, and I can’t say enough about [Kibana] because it’s been something that’s really been influential in how we’re continuing to evolve our own solutions within our reporting tools,” Kevin said.

By 2018, Ascendon’s infrastructure had expanded. Their Elastic deployments were a huge success, but Kevin’s team had an eye for improving efficiency even further — how could they more quickly and efficiently provision and configure their Elasticsearch clusters? They found a perfect solution in Elastic Cloud Enterprise, which has freed up their teams to focus on evolving their platform.

To learn more about why Ascendon chose ECE and how easy it was to implement, watch Lori Kevin’s full Elastic{ON} Tour Denver talk. 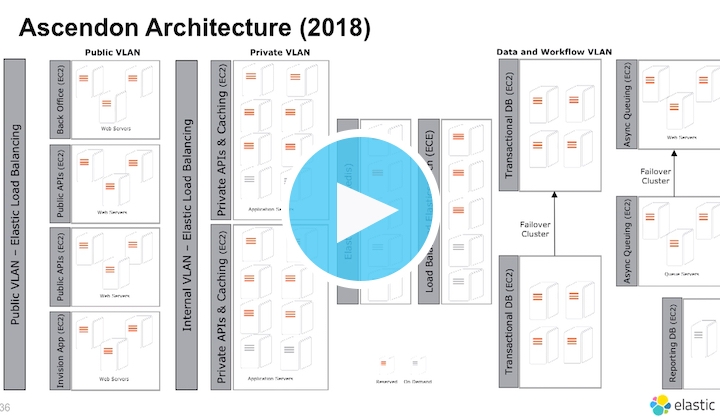