We are excited to share Elastic Security 7.13, which connects analysts to the information they need to make smart decisions. The release is a major step forward in our support for osquery, streamlining access to host data from across your environment. Threat intelligence is surfaced in new ways and new detection content spots concerning events. Last but not least, the release shares some developments in the endpoint area and support for new data sources.

Elastic Security 7.13 substantially broadens our support for osquery, the open source host instrumentation framework. Osquery is the not-so-secret weapon of many sophisticated security teams, augmenting numerous security, compliance, and operations use cases, such as:

Osquery is incredibly powerful, built by a worldwide open source community, and popular with Elastic users. But implementing it can be cumbersome and usually requires significant DevOps investment, hampering adoption. That’s why Elastic is working to make it easier for security teams to operationalize osquery at scale, starting with the capabilities in our 7.13 release.

The osquery management integration for Elastic Agent is new to Elastic Security, providing the power of osquery without the complexities of a separate management layer. With one click, you can install osquery across any or all of your Windows, macOS, and Linux hosts — no scripts or provisioning tools required. Without any configuration, data is ingested in Elasticsearch and shown in Kibana. Practitioners can run live queries with one or more agents or user-defined sets of agents, and define scheduled queries to capture state changes.

Need to collect logs from an existing osquery deployment? That’s a job for the Osquery Log Collection integration for Elastic Agent.

Analyzing osquery data in Elastic Security enables unified data analysis. From a single pane of glass, view all log/event results, security analytics, and osquery context — from historical view of queries that have been run, to the results of each query. Centralize security analytics to contextualize osquery results against other log/event data, anomalies, and threats, leveraging that context to improve monitoring.

As a combined solution, Elastic Security and osquery deliver invaluable host visibility and analytical power. Together, the combined solution enables unified analysis of all host data — osquery results, logs, events, you name it — to address cyber threats and related issues. Search hosts for information that would be unavailable otherwise. Ingest results right into Elasticsearch and visualize them in the Security app in Kibana. Then analyze it alongside data from other sources, using machine learning, the SIEM detection engine, dashboards, and more. 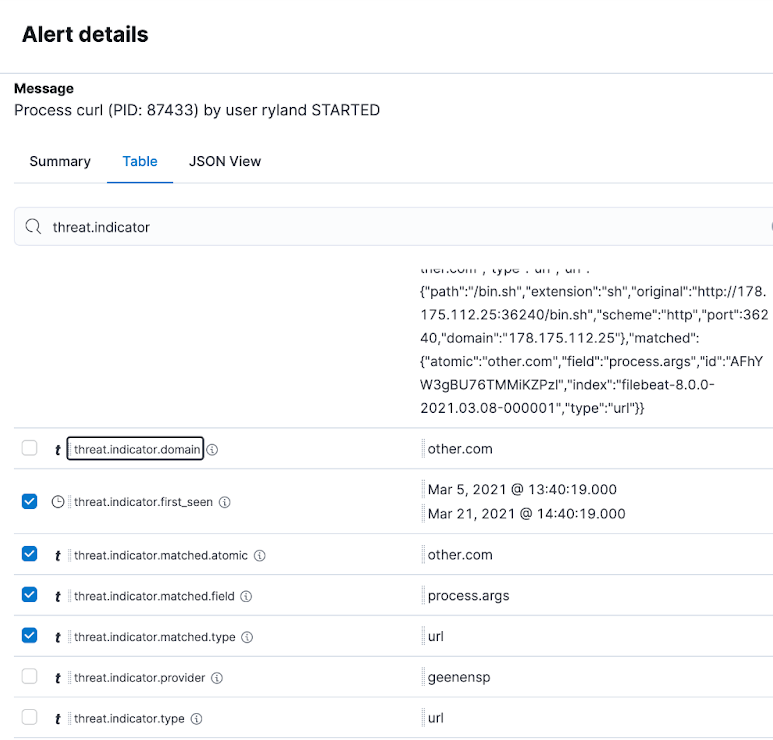 7.13 adds a timeline template for alerts generated by indicator match rules, accelerating investigations by surfacing the most relevant details on the Timeline workspace.

7.13 expands the Threat Intel module for Filebeat to support ingestion of the MalwareBazaar feed from abuse.ch. MalwareBazaar facilitates the sharing of malware samples across the security community, helping practitioners make the modern world a safer place. In Elastic Security, this contextual data can be applied to automated detection use cases via the indicator match rule type, as well as give analysts direct access to information valuable to various hunting and incident response use cases.

Security research engineers at Elastic have developed a new set of machine learning jobs that spot anomalies in network behavior that could reveal an advanced threat by spotting command-and-control connections, attempted data exfiltration, and other suspicious or malicious activity:

Elastic 7.13 introduces another new set of prebuilt detection rules, protecting O365, macOS, and other areas. The detection rules cover a wide range of attack techniques and are shipped with corresponding timeline templates.

Security research engineers at Elastic recently detailed a way to use both supervised and unsupervised ML to detect living-off-the-land binaries (what the cool kids call LOLBins) that would otherwise escape detection by blending into the noise of other system programs.

New and updated detection rules can now be delivered outside Elastic’s regular release cycle, enabling our security research engineers to respond more quickly to trending security events. All rules are version-controlled and updated individually. Administrators are notified about updates and can approve them with a click.

Version 7.13 introduces Fleet Server, a dedicated infrastructure component (take a load off, Kibana) for managing agents and administering agent integrations. It was written in Go, purpose-built to handle tens or hundreds of thousands of Agents. Learn more in the Elastic Cloud release blog.

CyberArk worked with Elastic to build a robust integration with their Privileged Access Security (PAS) solution, providing optimal ingestion and parsing of this valuable data source. Analyzing these events alongside other environmental data enables analysts to spot threats employing misused privileged accounts to advance along the cyber kill chain. The integration also includes the mighty sharp dashboard pictured below. 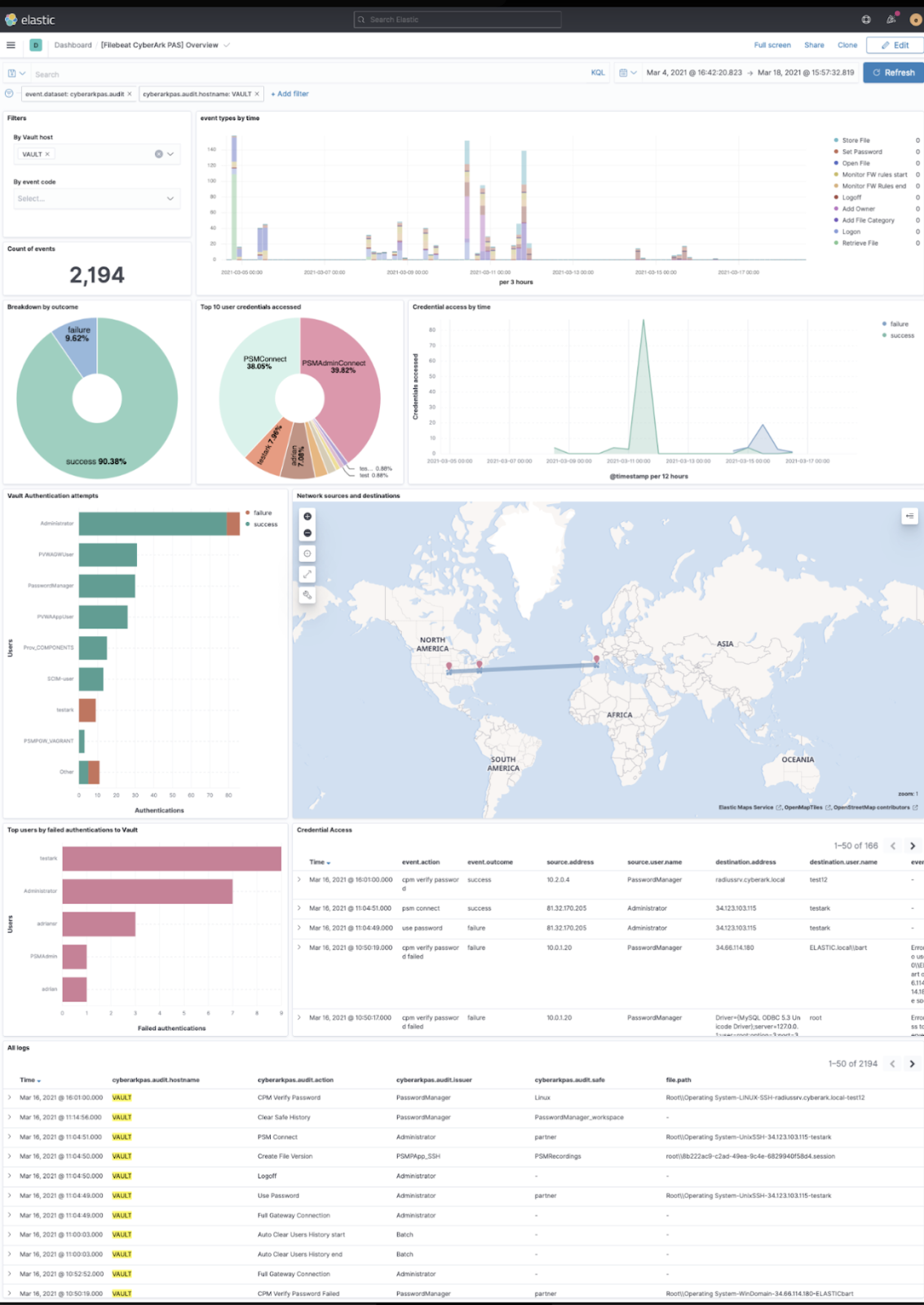 Version 7.13 now supports the ingestion of Windows events via the third-party and legacy SIEM connector.

The Sysmon module for Winlogbeat has been updated in a small but important way: it now supports Event 24 (clipboard change) and Event 25 (process tampering). Whether you’re using Agent or Winlogbeat, you can collect events revealing process tampering.

All Agent and Beats data integration modules have been updated to ECS 1.9.

Give Elastic Security 7.13 a spin

Want to try out all this goodness in Elastic Security? Experience all that 7.13 has to offer on Elastic Cloud, or check out an Elastic Security demo. Already have ECS-formatted data in Elasticsearch? Just upgrade to 7.13 of the Elastic Stack to start detecting and responding.