We have merged a new API Keys app into Management > Security in Kibana. This UI allows users with the manage_own_api_key permission to see and invalidate there own API keys (if they have any). It also allows admins with the manage_api_key permission to view and invalidate all users' API keys as well as seeing the realm and user that created the key. 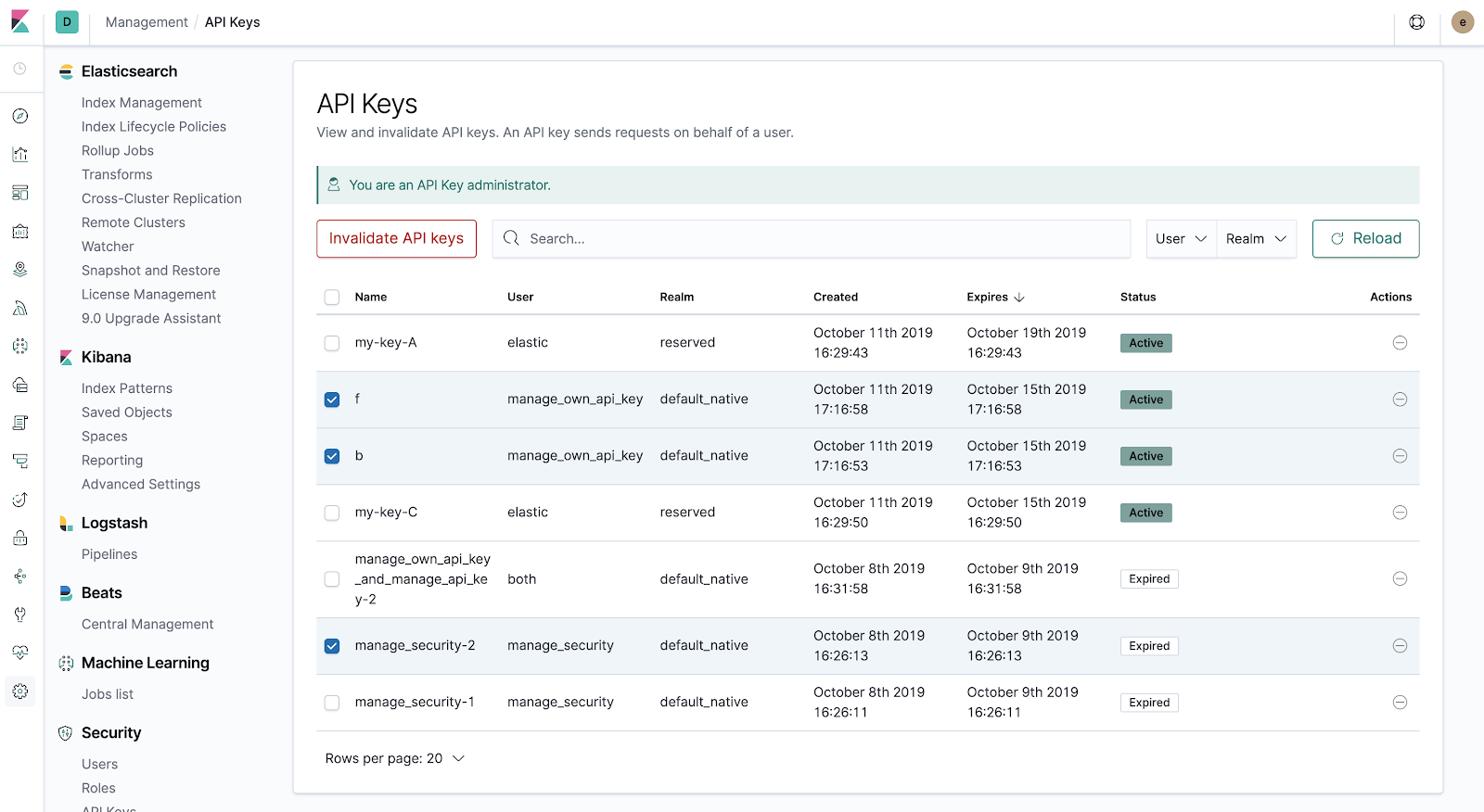 We have added a new script context api. This API allows users to list all the script context names that are available in Elasticsearch. Next, the api will be extended to provide more information about the variables and methods available to each context, which we hope to use in a future debugger as well as documentation generation.

Previously, we merged a PR which greatly reduced the number of generated doc value iterators from n^2 to 2n when aggregating global ordinals, a huge improvement in memory used while running Terms aggregations.

We are always looking for ways to improve our circuit breakers' accounting of memory. Running terms aggregations can accumulate a large number of cached TermsDict objects, each of which contains a BytesRef sized to the largest term in that segment. This memory usage is not currently tracked by the circuit breakers, and can be a non-trivial percentage of memory. Discussion is still ongoing as to whether this PR is the right approach, but we want to track this usage as we believe it's significant.

We have wrapped up the formatting changes to the SLM APIs, so the work to reformat the API reference docs is now complete

This means that the REST APIs section of the Elasticsearch reference guide all follows a consistent format and should help users can more easily find the information they need when developing against the APIs.

That said, there will be some ongoing work to streamline the reference content. As noted in #48189, applying the template has highlighted some issues.We have updated the bulk API to address missing information and we will be filling any other similar gaps in future changes.

We have merged the enrich processor. This new ingest processor aims to enrich documents at ingest time with data from another index. Users can define an enrich policy which will define which field to match on and then what information from the source index to add to the incoming document.Example use cases for the enrich processor include:

We integrated a new snapshot of Lucene 8.3 in Elasticsearch and this is not causing regressions anymore. The plan is to get a first release candidate built today so hopefully we will have Lucene 8.3 released in the coming week or two.

Our construction logic for KD trees assumes independence of dimensions. However, for some data we index using KD trees, this is usually not the case. For instance the bounding boxes we index tend to be small, so the minimum latitude is usually close to the maximum latitude, and the minimum longitude tends to be close to the maximum longitude. We updated the building logic in order to regularly re-compute the actual bounds of values on every dimension, which made filtering on geo shapes significantly faster.