Someone Like Me | Mandy Andress on security at Elastic

In this edition we meet Mandy Andress, Chief Information Security Officer (CISO) at Elastic, on what it means to be a female leader and a part of the LGBTQA+ community in the security industry, tech at large, and her advice for security enthusiasts.

I’m in between places right now, but I’m relocating to Austin. I’m currently staying in Houston where I grew up.

How did you get into the security space?

By chance! My undergrad was in accounting, but I was getting a dual degree in management information systems with a focus on financial system auditing. I spent most of my free time doing various things with computers but never connected that I could also do it as a career.

I had an accounting systems class in college, which at the time involved glorified Microsoft Excel macros that you coded to do things. The professor pulled me aside to say that I had a good aptitude for it and asked whether I’d considered getting into systems auditing as a career. I got an internship with Deloitte for systems auditing and that changed the whole trajectory I was on.

I started in systems auditing and that's where I really got into the foundation of security and controls. I went from there to auditing security of systems. Then, to being more of a security architect and designing security of systems. I found work as a consultant, and that’s when I moved out to Silicon Valley and worked with a few startups. It was really interesting stuff. I learned that no two security programs should look alike, because no two companies are alike. I just found a love for that, and that's what I've been doing ever since — all from one conversation in college.

What attracted you to an opportunity at Elastic?

For a while I was in tech, but I moved to the East Coast to work in financial services because that’s where you could do all the cool security things at the time, with the budget to do it properly. I did a lot, and learned a lot, but eventually wanted to get back into tech. I had a look around to see who was doing interesting things. I found there were a lot of companies doing complex initiatives with data. I fell in love with data, really. So I started looking for a company that was doing interesting things with data, and enabling other companies to do the same. That’s when I came across Elastic.

Why Elastic over other companies?

I explored how the company operated, met with people throughout the interview process and what stood out to me was the pride and reverence people had for Elastic and what they were trying to accomplish. I was also impressed by the leadership team and how they were running the company. Really, it sounded too good to be true!

What do you think is really special about Elastic?

Growing up in Texas, being a gay woman, lots of things weren't necessarily accessible or accepted. Part of my move to Silicon Valley was an attempt to find a place that was much more opening and accepting. At the time, I was living two lives. I was not “out” at work, so I had to hide it. When I moved to California I was open about my sexual orientation. I did the same when I moved to the East Coast. But it wasn’t until I got to Elastic that I realized I was still wearing a mask. I wasn’t truly open about my hobbies, or who I was outside of work. I was still wearing a mask.

Living that dual life is exhausting. It took energy and focus to have to live that way. Who knows what about me? How do I talk to people in this situation? What if I run into someone outside of work — how do I react? It’s all an extra layer of stress and focus that didn’t allow the personal or professional life to flourish. 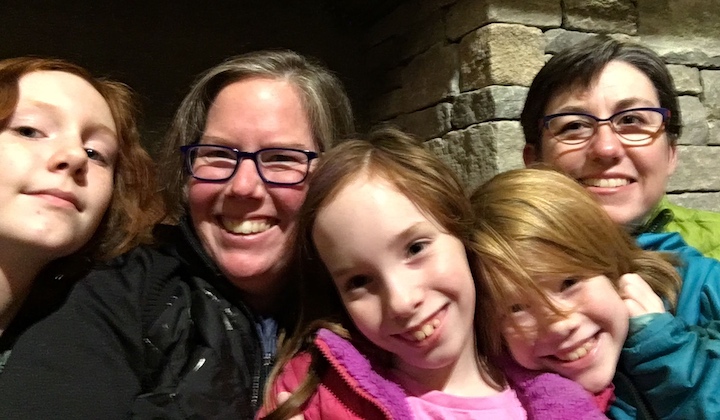 Mandy with her family.

At Elastic I met with people who are genuine, who are their authentic selves. I've spent my first two years here just really finding those different layers of myself that are composed of masks, or whatever you want to call it. Those things I used to do and sometimes still do to conform, but didn't realize I was doing. Elastic has helped me learn that about myself and given me the freedom and space to work through some of those things.

What are the challenges of being a woman, not to mention a female leader, in tech?

When I meandered into the security field, I was often the only woman in the room as part of the conversation. Walking up to men at conferences and being talked at, as if I don’t know anything — it makes you angry. Sometimes though, I would say something that showed that I knew a thing or two and I would wait and gauge the look on their faces. There’s often a lot of unconscious bias, and it’s interesting to see if it plays out in jokes, or in the way people ignore the women in the room, or how decisions are made when women are not even in the room. That feeling that you’re not truly inside.

I’m trying to change the perception around women in tech as much as I can. In the way I build my teams, and the way I treat interactions with others. It’s a challenge, but one I’m willing to take on.

What’s your favorite part of the Elastic Source Code?

I love the source code in general. We just went through all of the Source Code as part of a team discussion. But for me, what first comes to mind is the 01.02, / Format. It’s great that we recognize that people come with all kinds of different perspectives. And that those perspectives create better solutions than any one person can create on their own. Different ideas, more perspectives coming together, inspires creativity. It also creates recognition and empathy for others, because you continually realize that your perspective isn't necessarily always the only one.

I had someone give me some career advice during my first internship. They told me to be the person that takes on the hardest challenge, be the one that raises their hand to do the job that no one else wants to do. You might fail, but you will learn an awful lot along the way and hopefully you won't fail the next time.