This blog post is based on the talk Seven Deadly Sins of Elasticsearch Benchmarking at Elastic{ON} 2018.

Performance is a key feature of Elasticsearch. Our development team runs benchmarks to evaluate the performance characteristics of new features or to measure the effectiveness of performance improvements. Benchmarks also guide our decisions for good out-of-the-box defaults for Elasticsearch. To measure changes in performance over time we run nightly and release benchmarks with our benchmarking software Rally.

In this blog post, we want to share our experiences and provide seven tips to keep in mind when you are benchmarking. While we use Elasticsearch as an example you can use these guidelines to benchmark a variety of systems.

On which hardware and software do you run benchmarks? The benchmarked system needs to be as close to production as possible (hint: a developer laptop is not close). Differences in hardware, software versions or system configuration will affect performance. Also consider the network in which you run: The only traffic on that network should be due to your benchmarks.

You also need to ensure the entire system is tuned to get reproducible numbers. This means for example:

In cloud environments you might not have full control over all parameters like JVM or other system settings. You should still aim to keep all parameters constant that are under your control. For example, you should perform all your experiments on the very same instance. Use statistical tests to check whether differences in performance are statistically significant (see also tip seven).

You don't get peak performance from the first second. For example, the JVM has a just-in-time (JIT) compiler built-in that optimizes hot code paths at runtime. Therefore, it takes time until the system has stabilized.

Buffers absorb (initial) spikes and thus throughput in the beginning might be better than sustained throughput. Also, caches avoid that potentially expensive operations are done multiple times. And caches are everywhere: in the CPU or other hardware, the operating system and the application.

In the picture below you can see how indexing throughput in Elasticsearch behaves over time in a benchmark. The red part is the warmup phase, the blue one the actual measurement phase. We see that throughput is steadily rising. Due to empty buffers the system is even able to absorb even more load at the beginning. Over time the system stabilizes and we begin measuring. 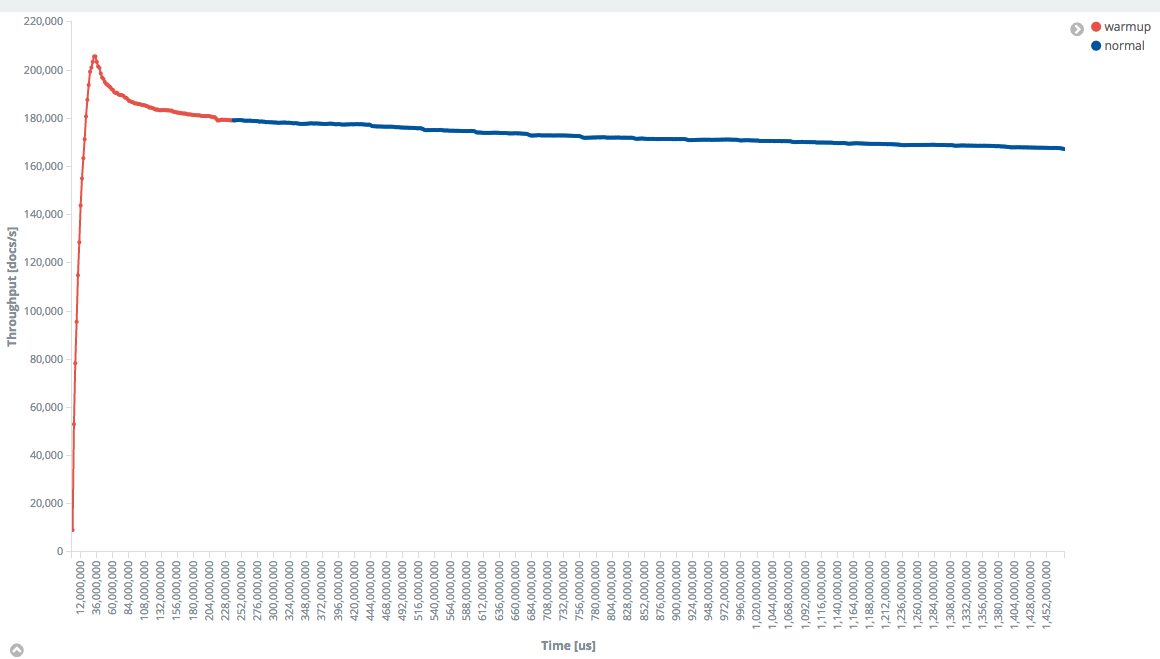 Rally supports warmup out of the box. You can either choose to use a specific time-period for warmup or run an operation for a certain number of warmup iterations (see docs). It will record all samples and tags each one with the sample-type “warmup” or “normal” so you can clearly see which is which.

You should model the same access patterns in your benchmark as in production. How many clients are hitting your system concurrently? Are they independent of each other (think: several Internet users hitting your system)? What queries are executed, how often and at what times during the day do you run batch jobs? You should ask yourself these questions when creating a benchmark.

There are two important classes of API calls which you need to treat differently in benchmarks:

Limiting the throughput of interactive operations is crucial for getting more realistic results. Latency is determined by two components: Waiting time and service time. For example, in a coffee shop, the waiting time is the time you spend in the waiting line and the service time is the time it takes the barista to prepare your coffee. If you saturate the system, latency is dominated by waiting time. In our coffee shop example, this means that if new customers arrive all the time, the barista is always busy and the waiting line is long. Hence, customers spend most of their time waiting to get in front of the line. This is not how you operate your systems in production so limit throughput to a sustainable level. For a more in-depth explanation of this phenomenon, we recommend you read Relating Service Utilisation to Latency.

One other important aspect to consider is clients arrivals at your endpoint. There are two typical cases:

Both systems behave very differently and thus it is important to model the correct type of system to get realistic results. Different load generators support different models, for example Rally implements an open system model. If you are interested in this topic, the paper Open Versus Closed: A Cautionary Tale provides a good overview of the differences in behavior of open and closed systems.

4. Benchmarking software has bugs too

Approach your search for bottlenecks methodically and check for example with the USE method developed by Brendan Gregg.

6. Use a Structured Process

Chaos is all too common in benchmarking, yet it is poisonous. Follow this process:

It sounds simple but is hard to do in practice. Some specific tips:

7. Statistics to the Rescue

When benchmarking each configuration just once you are ignoring run-to-run variation. Even if you are tightly controlling every variable that you can (see the previous section), there is still run-to-run variation: The garbage collector runs at different times, the JIT compiler might optimize slightly differently, client requests have different interleaving or the OS scheduler might decide to migrate your process to a different CPU. Therefore, you need to repeat the same experiment multiple times and conduct a statistical significance test. We recommend you read section 3 in the paper Statistically Rigorous Java Performance Evaluation for a detailed how-to guide.

Benchmarking is tricky: It's simple to create a script that generates load and produces some numbers. But as you have seen, it is hard to come up with meaningful numbers. Pitfalls await at every corner: Which hardware do you choose? How do you model user behavior? Can you be sure that you are really benchmarking the target system and not - say - the network in between? And you do you make sense of the numbers you get? We hope that with these seven tips you are able to get better measurements to guide your decisions.

The title image Apple puzzle has been created by Salvatore Gerace and is licensed as CC BY-SA 2.0.