macOS vs. Windows – What kernels tell you about security events: Part 1

How would you compare the Windows and macOS operating systems? In what ways are they similar? Why do they each take different approaches to solving the same problem? For the last 19 years I've developed security software for Windows. Recently, I’ve started implementing similar features on macOS. Since then, people have asked me questions like this. The more experience I gained on these two operating systems, the more I realized they’re very different. Even when the problems they set out to solve are common, their paths differ. In this two-part series, I will focus on the operating system events supported by Windows and macOS, and explain each operating system's approach.

In Part 1, we’ll discuss process events. In Part 2, we’ll discuss file and network events. These events are crucial for endpoint security analysis. Through multiple perspectives in this post, I hope to:

This post is based on some of my own experiences. It does not intend to be an exhaustive list.

Microsoft Windows has traditionally been open. It runs on hardware from different vendors and allows third-party developers to write applications on top of it. macOS is part of Apple’s end-to-end integrated ecosystem, which is quite the opposite of being “open.” This article does not try to take sides on the decades-long “open vs. closed” debate. Apart from end-to-end user experience, developers and researchers usually care about other things.

The abundance of APIs and documents provided by Windows really enabled developers to do virtually anything in the cyber world. While on the macOS side, the beauty of simplicity reminds people that Apple takes lots of things as their own responsibility instead of sharing them with third-party developers. If you find something from Apple difficult to use, it’s perhaps because you’re looking at something Apple feels is their own backyard. Take kernel mode debugging or kernel core dumps as examples. On the upside though, macOS developers can indulge themselves in the open source Darwin kernel, whereas Windows’ kernel is closed source and yet Windows developers feel spoiled with an abundance of documentation. 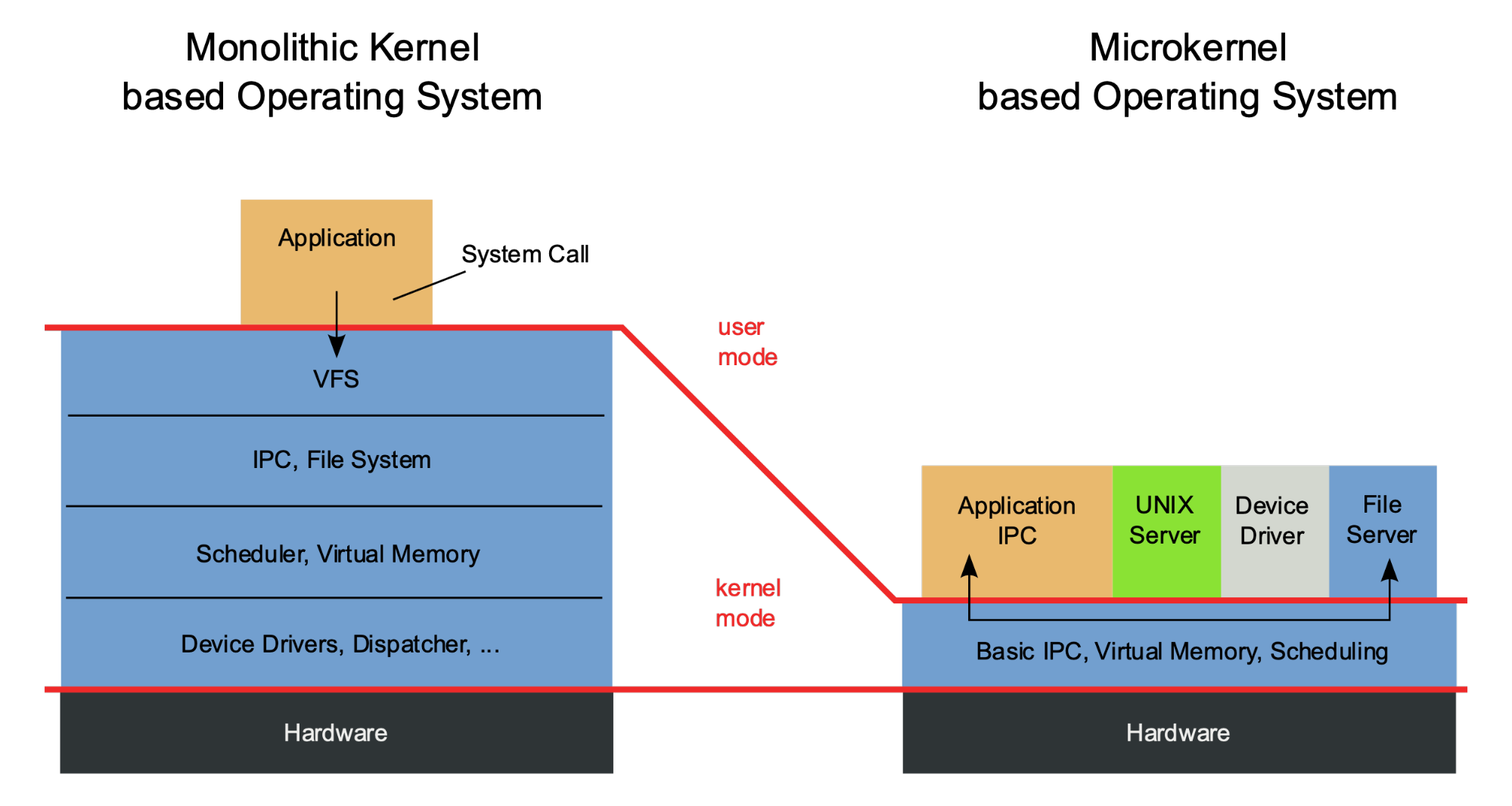 Modern macOS and Microsoft Windows both have hybrid kernels, which are neither a pure microkernel, nor monolithic. However, one cannot infer that the two kernels are similarly architectured based on the same kernel type — they actually came from different places.

Microsoft Windows, in the Windows 9x days, used a monolithic kernel. macOS XNU consists of several core building blocks, one of which came from the Mach kernel that carries the genes of a microkernel. Even though both operating systems have evolved into today’s “hybrid” form, their early influences still manifest and affect developers’ daily lives. For example, Apple announced in WWDC 2019 it’s going to deprecate kernel extensions (kext) support for third-party developers starting with macOS 10.16. This means they are kicking third-party developers out of the kernel. For some, this may seem shocking. However, thinking from a microkernel point of view, this change sounds just like a logical next step.

Over the years, Microsoft created a new Windows Driver Framework. It also moved lots of traditional kernel mode driver support into user mode, encouraging people to implement drivers in user mode. However, caveats exist. For example, in Windows Filtering Platform, even though most of the functionalities can be done in user mode, some of the crucial functionalities still have to be done in the kernel.

Some people have doubts about Apple's WWDC 2019 kext deprecation announcement, as it means that backward compatibility is broken for any third-party software that includes kexts. People will have to rewrite things in user mode from scratch. It’s understandable that some may want Apple to delay or cancel the deprecation. Regardless, deprecation is happening as planned. Because it is a closed ecosystem and Apple retains end-to-end control, backward compatibility is never on its menu and deprecation has been a consistent part of macOS releases. Check out the “Deprecation” sections in a few of the past release notes: Mojave, Catalina, and the coming release of Big Sur.

This means, as a macOS developer, you may frequently find yourself rewriting everything from scratch — even if your software is well-architected and implemented. Windows, on the other hand, has been keeping its promise of backward compatibility. You may find applications created for Windows 3.1 still run on the latest Windows 10. Microsoft does occasionally attempt to deprecate things. For example, it has been trying to deprecate support for legacy file system drivers ever since the introduction of its replacement —  file system minifilter — in Windows XP SP2 on August 25, 2004. But, as of today, it’s still unable to do so. However, this doesn’t mean legacy file system drivers remain a viable choice for third-party developers.

PsSetCreateProcessNotifyRoutineEx allows developers to register a callback with Windows. Later on when a process is created or exits, Windows will notify the caller by invoking the callback. The callback can be used for both prevention and notification. The parameters passed to the callback contain a rich set of information useful for process events, shown in the following figure: 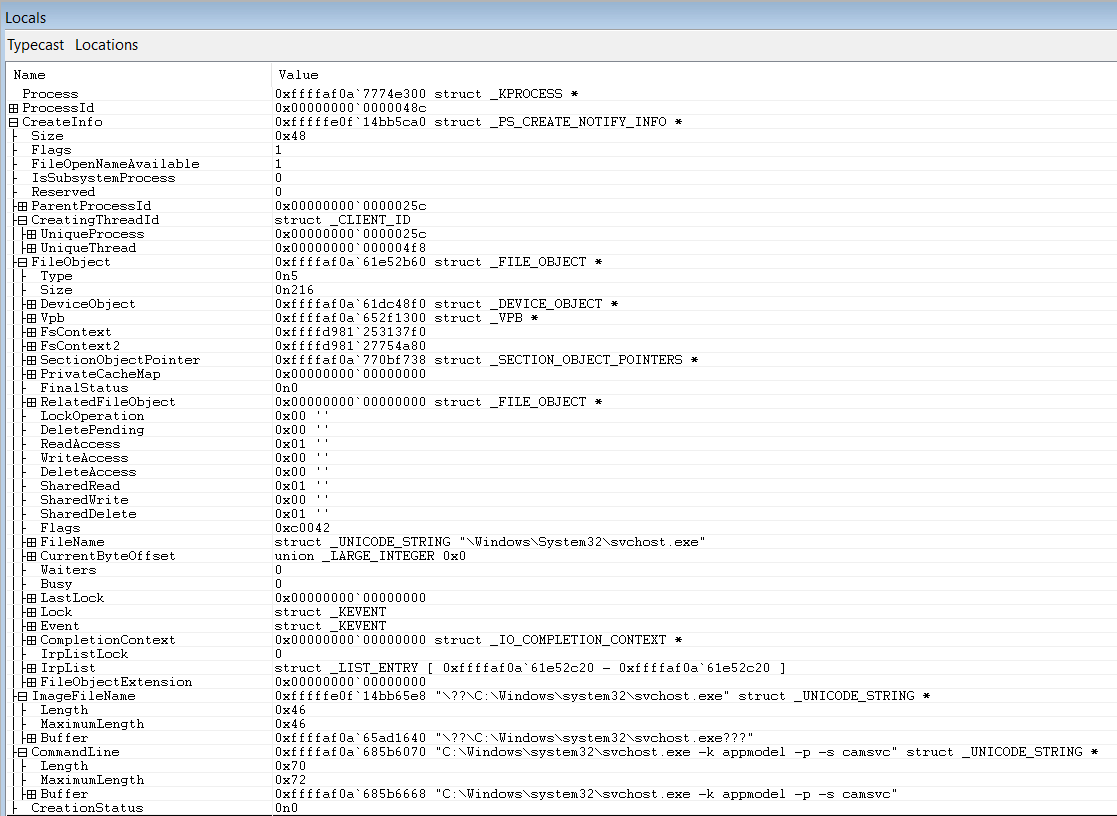 Figure 2: Screenshot of a debug session that shows PsSetCreateProcessNotifyRoutineEx parameters

To learn how to use PsSetCreateProcessNotifyRoutineEx, take a look at Microsoft’s ObCallback  Registration Driver sample code.

It’s also worth mentioning the context of a process. On Windows, when the callback registered by PsSetCreateProcessNotifyRoutineEx is invoked, it’s in the context of the creating process for process creations. For process terminations, it’s in the context of the terminating process (see the document). Inside the Windows kernel, most of the time you can find out the actor process by simply calling PsGetCurrentProcessId, because the kernel service usually shares context with the actor process. However, in the macOS kernel (for reasons), developers are advised to avoid calling proc_self in the kernel to find out the actor process. This is easier to understand from a microkernel’s point of view, because most of the system services are delegated to other processes on a microkernel system. Particularly, when kernel extensions are replaced by system extensions (which runs in user mode) in macOS 10.16, the same advice should be strictly followed.

Kauth is a Kernel Programming Interface (KPI) provided by macOS to allow third parties — primarily security software developers — to intercept select operations.1 As the definition suggests, it can only be used in kernel mode. There’s another KPI, called Mandatory Access Control Framework (MACF), which is way more powerful than Kauth, but it’s Apple’s private KPI and not “open” for third-party developers. With the kext deprecation announcement, both Kauth and MACF won’t be available for third-party developers, starting with macOS 10.16. I briefly describe Kauth here to present a continuity view for you to get an idea of macOS's evolution:

Kauth defines “scopes,” which Apple describes as “areas of interest” for authorization within the kernel.1 A couple scopes in Kauth provide means for third-party software to get notified when a process is launched.

macOS Endpoint Security (ES) is a kind of System Extension which runs in user mode, and it’s the replacement for Kauth. In the new ES framework, event types are better organized in one enum definition es_event_type_t defined in XCode’s SDK header file:

Compared to the Windows callback set by PsSetCreateProcessNotifyRoutineEx, the information we can get from the Kauth scope listener callback is quite limited. For example, it doesn’t provide the command line and environment arguments information for a process launch, which security vendors consider crucial. However, Kauth’s successor — Endpoint Security — is indeed an enhancement of Kauth in many ways. For example, the long-waited command line and environment arguments information is provided now by ES, along with some cool new information:

The macOS ES framework puts this information in a message envelope es_message_t and passes it to third-party ES extensions via the registered event handler block. We'll talk about es_message_t more in the "File events" section of Part 2. In the message envelope, you can find the information pertaining to process events, such as: es_event_exec_t, es_process_t. They’re defined in ESMessage.h, which is under the same folder as ESTypes.h

For more hands-on experience, take a look at my colleague Will Yu’s Mac system extensions for threat detection: Part 3 blog post and download his sample code SimpleEndpoint. Alternatively, you can download a macOS ProcessMonitor to play around with and explore its source code here.

We’ll continue the discussion about File Events and Network Events in macOS vs. Windows – What the kernels tell you about security events: Part 2