Machine learning for cybersecurity: only as effective as your implementation

We recently launched Elastic Security, combining the threat hunting and analytics tools from Elastic SIEM with the prevention and response features of Elastic Endpoint Security. This combined solution focuses on detecting and flexibly responding to security threats, with machine learning providing core capabilities for real-time protections, detections, and interactive hunting. But why are machine learning tools so important in information security? How is machine learning being applied? In this first of a two-part blog series, we’ll motivate the "why" and explore the "how," highlighting malware prevention via supervised machine learning in Elastic Endpoint Security. In a follow-up, we’ll highlight where machine learning plays a role in detecting anomalous behavior from the global view of Elastic SIEM.

Even as the United States prepares for the 2020 election cycle, a three-year anniversary of an infamous cyber attack is still top of mind.

On Tuesday, March 15, 2016, threat actors allegedly from the advanced persistent threat (APT) Group 28 (aka “Fancy Bear”) began port scanning servers at the Democratic National Committee. This was part of a broader reconnaissance effort that adversaries commonly perform against a target. By Saturday, the adversary had delivered a spear-phishing email to the campaign chairman to gain access to his email account. Although recipients noted it as suspicious, the attack worked: by Monday, the threat group had compromised the chairman’s email account and stolen more than 50 thousand emails. Then, from a new email account created by attackers within the DNC domain (with a name similar to the account of a recognized DNC staffer), a spreadsheet named “candidate favorability ratings” was delivered to 30 DNC staffers. At least one recipient opened the spreadsheet and enabled a macro, which resulted in a local user account being hacked.

In the weeks that followed, a common playbook of tactics unfolded in what is now eponymously known as the DNC hack. Like other APT groups, while the specific techniques deployed are circumstantially tailored, the broader tactics are repeated in attack after attack (and thus codified by MITRE). The attack process typically follows some variation of the following steps:

It’s not difficult to understand why unified protections and comprehensive event management are important in a case like this. Unfortunately, being compromised has become a fact of life, and security organizations aim to stop an attacker early in the execution of their plan. Thus, most of the energy traditionally spent in security has been toward detection mechanisms that reduce the dwell time of an attacker post-compromise. Since attacker tools and techniques vary, rules crafted for specific adversary techniques and machine learning trained to catch more general behaviors have been used to detect almost every point along the attacker’s natural progression from reconnaissance to delivery; exploitation to exfiltration.

The MITRE Corporation began developing a globally accessible knowledge base of adversary tactics and techniques (ATT&CK) based on real-world observations in 2014, which has now grown to codify 266 specific techniques, including many created or enhanced by community contributions of information. The MITRE ATT&CK matrix is now the most comprehensive adversary model and framework for describing the actions an adversary may take to compromise and operate within an enterprise network. 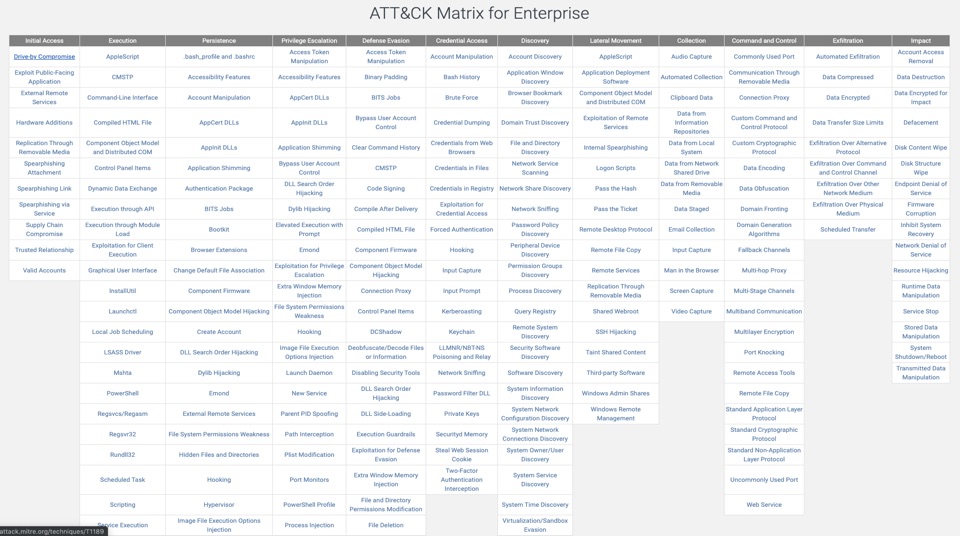 Machine learning offers an attractive paradigm for scaling the detection of adversarial behaviors and their tools, largely owing to the following: 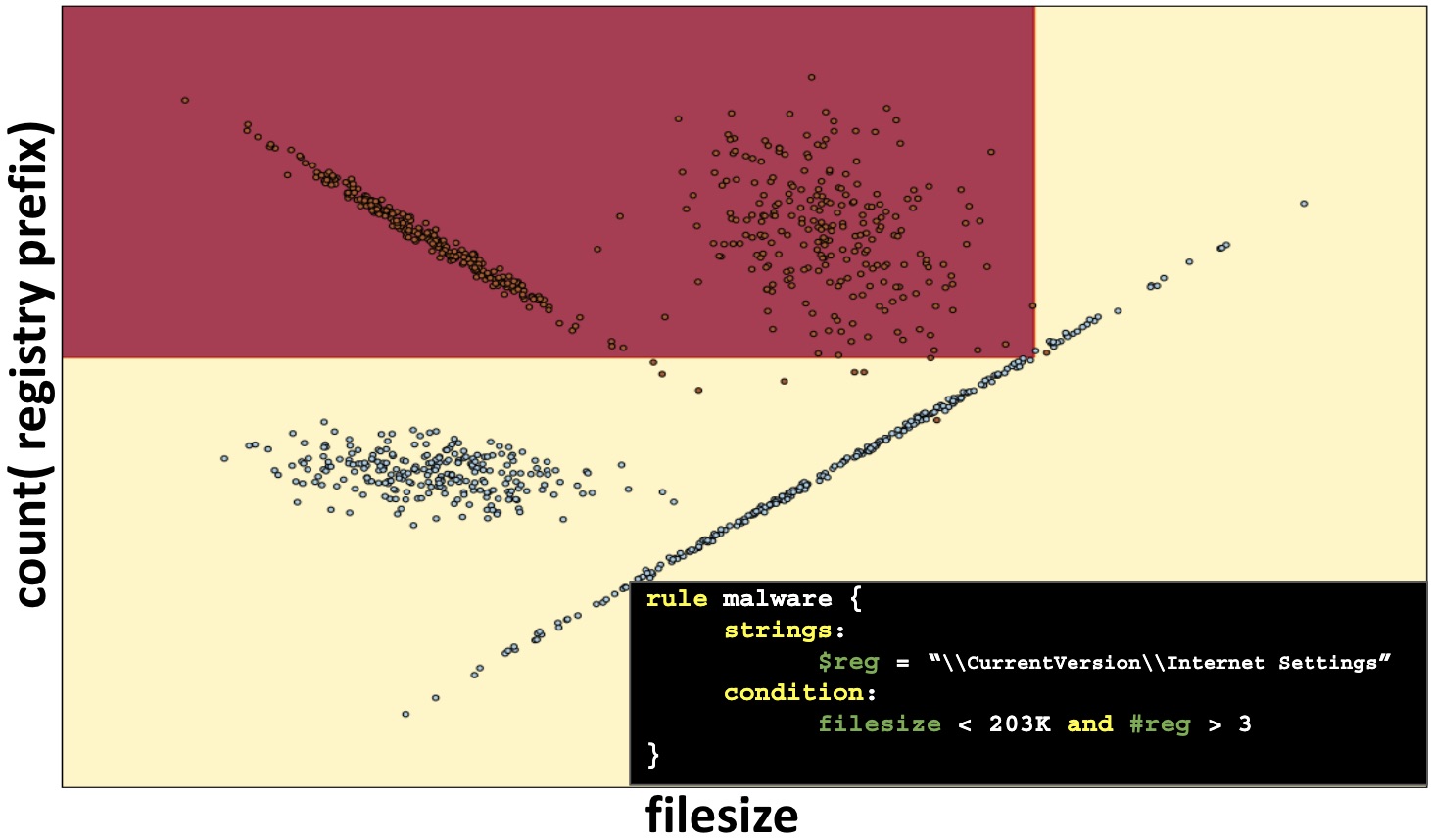 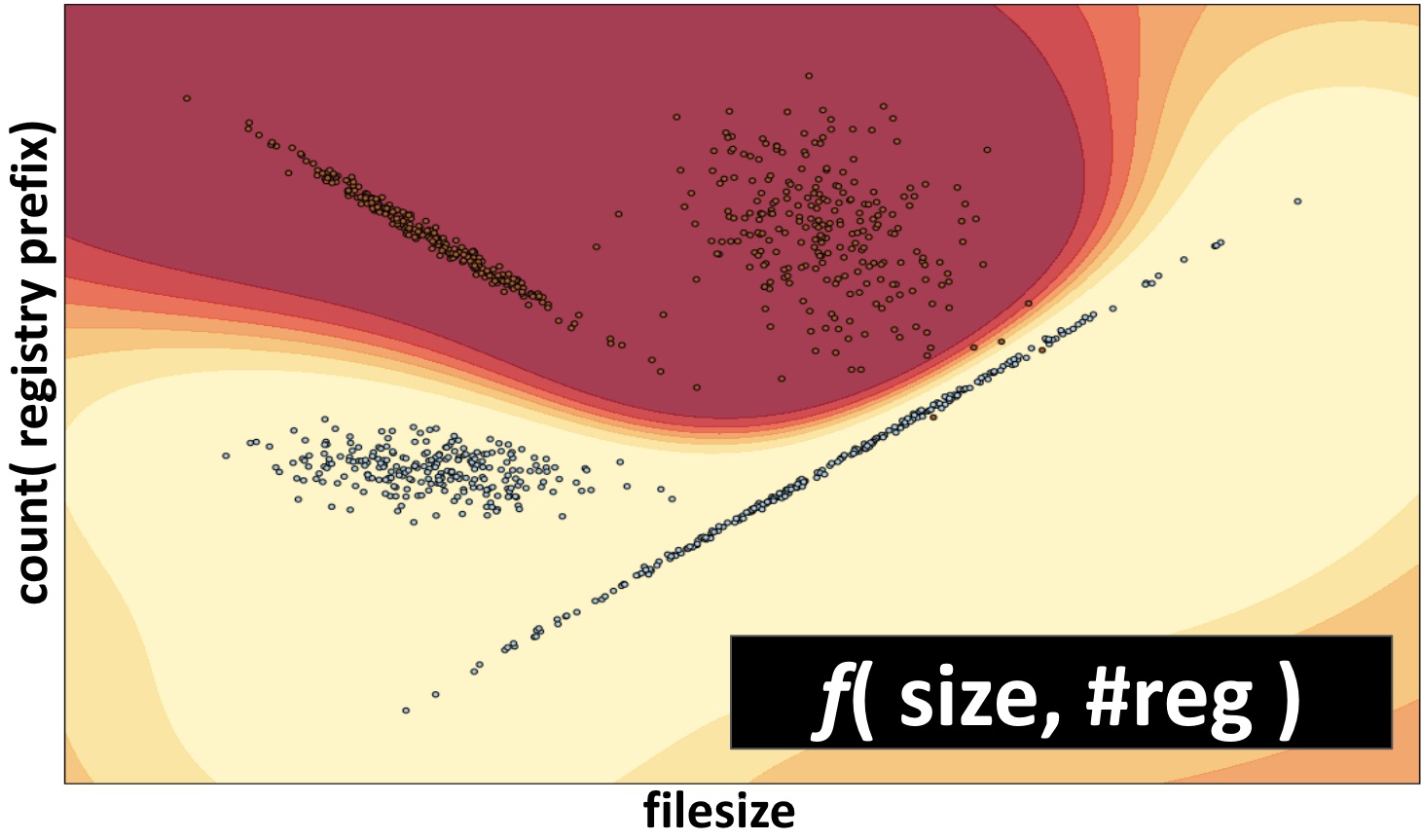 Marketing campaigns notwithstanding, machine learning has generally been a benefit to security. But, the truth is that machine learning for security brings a number of substantive challenges:

Tackling these and other considerations motivate the need for security data science and engineering at Elastic. So, where have we applied machine learning? Here, we’ll describe where machine learning plays a role in Elastic Endpoint Security protections. In a follow-up, we’ll highlight where it plays a role in detecting and searching from bulk event data in Elastic SIEM.

Both custom and common software tools are employed by threat actors across all tactics in the MITRE ATT&CK framework. In particular, custom software, macros, or scripts may be used to gain initial access, access credentials, establish command-and-control communications, or render the adversary’s desired impact, such as data encryption for ransomware. MalwareScore is a prevention in Elastic Endpoint Security that detects these malicious files via a trained machine learning model.

Writing rules or heuristics for every type of known malicious software tool is not sustainable, especially as malware variants evolve. Instead, MalwareScore leverages the scale and automation benefits of machine learning. MalwareScore models are trained to generalize from patterns discovered in large corpora of malicious and benign files: exceeding 150M files for Windows executable files for recent model versions.

MalwareScore consists of three malicious software models: Windows PE files, macro-based Office documents, and macOS binaries (Mach-O). We apply domain expertise from our threat intelligence team to identify features of these files important in determining whether the file is likely good or bad. For instance, Windows PE files are summarized by features that are derived from aspects of the file that include:

Mach-O binaries are summarized from similar information. Macros embedded within Office documents are characterized by both macro content and document properties.

Features like those listed above are readily converted into a format (vector of numbers) that can be ingested and analyzed by machine learning algorithms. MalwareScore leverages gradient boosting decision trees because these model types offer a nice combination of excellent efficacy (high detection rate with a low false positive rate) and computational simplicity (essentially, a series of if/then statements). Indeed, the models are designed to be lightweight (roughly 5MB) with low CPU utilization.

MalwareScore is a supervised machine learning model, meaning that each file is paired with a malicious or benign label. The model is trained to minimize prediction errors of these target labels on the training set, with model regularization employed so that the model generalizes to samples not in the training set, rather than just memorizing. While the features and the model type are important, the richness and distribution of the training data and the quality of the labels are fundamental to providing a good model.

MalwareScore-supervised machine learning models bring an important element of protection to the Elastic Stack. Users who install Elastic Endpoint Security are protected against malware as part of a layered protection strategy that includes behavioral rules. You can try a recent version of MalwareScore in VirusTotal. Upload or search for a PE, macro, or Mach-O file, and view the results yourself!

An even broader security and operational perspective can be attained in Elastic SIEM. In addition to endpoint events collected by Elastic Endpoint Security or other technologies, the SIEM app may include audit events, authentication logs, and firewall logs in holistic detail. In the next blog, we’ll discuss how machine learning in Elastic SIEM can be used to expose unknown threats via anomaly detection in an unsupervised learning paradigm. This allows you to protect against behaviors at the endpoint, and discover unexpected behavior in Elastic SIEM.