Not only are such explainability and interpretability features crucial to enshrine trust in machine learning systems, they are also increasingly tied in with data protection regulations. For example, the General Data Protection Regulation (GDPR) introduced in the European Union aims to give data subjects rights to know about automated decisions carried out with their personal data.

At Elastic, we attempt to engineer explanatory facilities into our machine learning products to help users understand which factors could be influencing a particular decision made by a machine learning job. In this post, we’ll attempt to uncover some of the thinking behind anomaly detection influencers, an “explanatory” feature that we developed to help users understand the anomalies picked out by our anomaly detection algorithm.

Users of our anomaly detection product will be familiar with influencers — values that affect or influence a given anomaly. Let’s take a look at how we compute these values.

Consider a fictional corporate network where the number of bytes sent by a machine’s communication applications (Skype, Messenger, Outlook) are tracked to make sure that unusual or malicious data exfiltration can be identified. We want to run anomaly detection on the number of bytes to make sure we are alerted if the number exceeds the mean (potential data exfiltration) or falls below the mean (potential malfunction in some part of the network). The time series profile of our dataset could look like something from Figure 1. 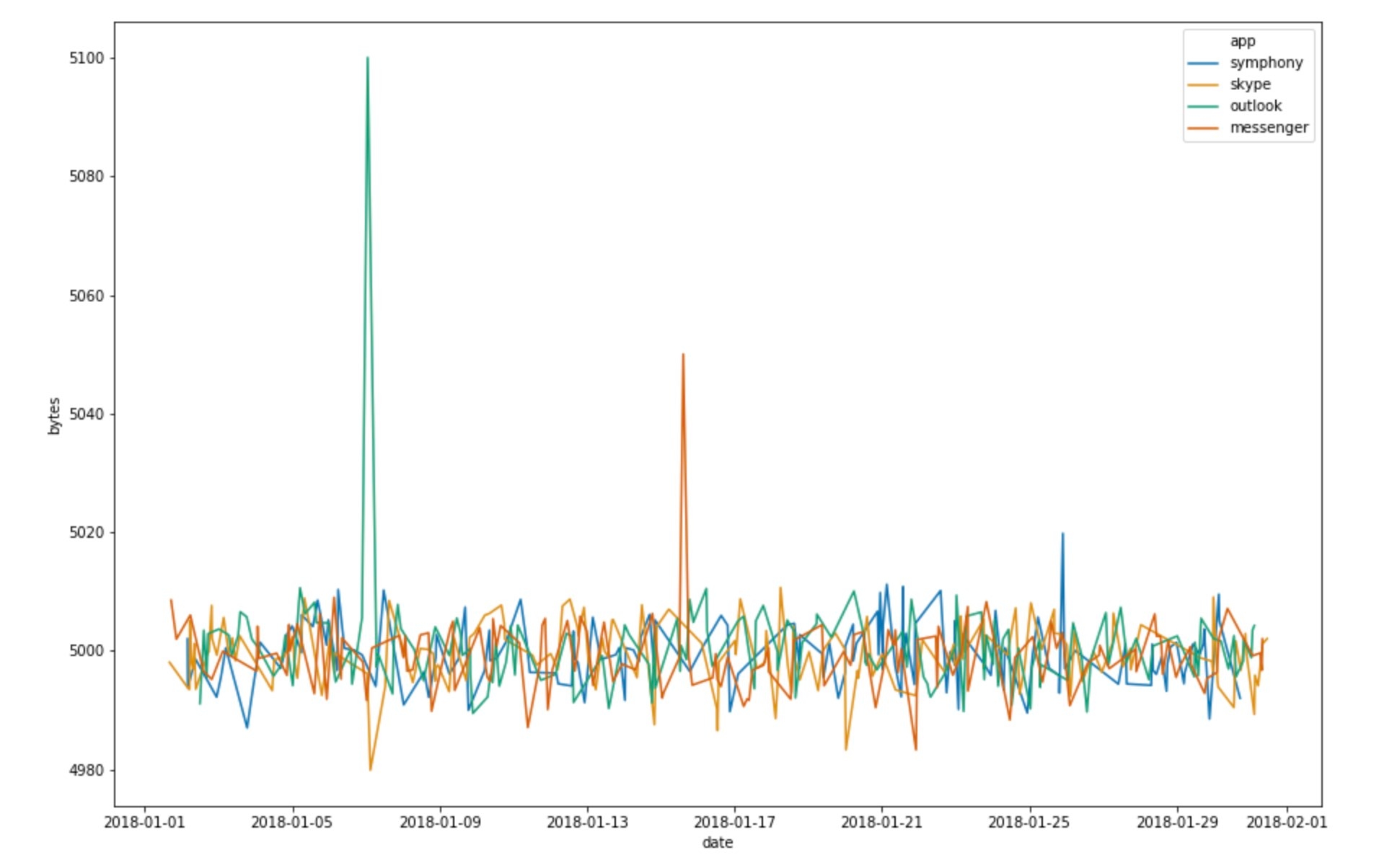 We have various applications sending bytes over the corporate network. When we configure our bucket span, let’s say 12 hours, and apply our detector function, let’s say mean, we transform the dataset to look something like the time series in Figure 2. This is a simplified case to help in illustrating the concept of influencers and simplifies many of the complexities needed in a production machine learning job. For example, in a case like this in a production system, one might want to model the time series profile of each application separately. 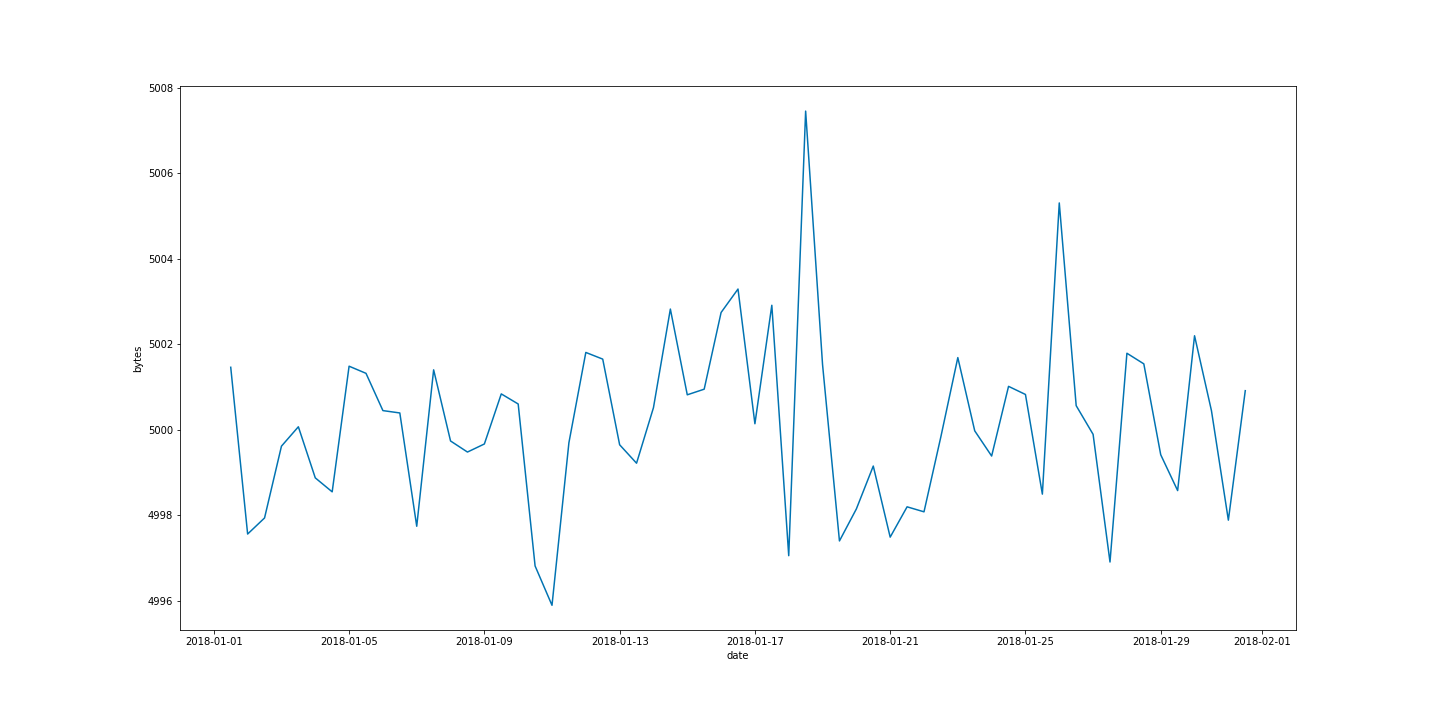 Each individual bucket value becomes a datapoint that we use to create various distributions to model the behavior of the network. As we can see from Figure 3, the distribution profile of our model mean bytes evolves the more data the anomaly detection system sees. 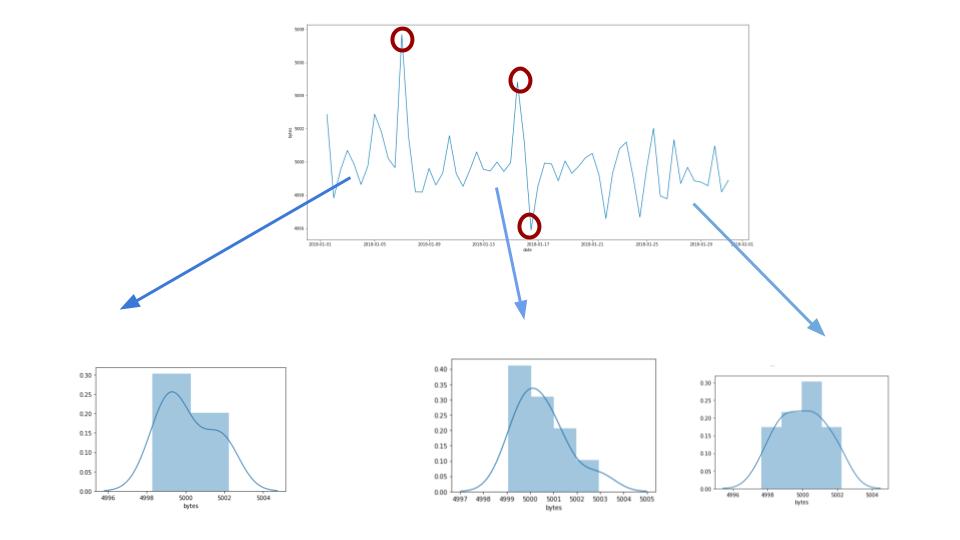 When we encounter a bucket value that has a very low probability of occurring according to our model of the data at that point in time, we mark the bucket as anomalous.

But what can we say caused the anomaly at that point in time? Inferring causation from correlation is a notoriously thorny problem. For example, consider we were tracking the sales of sunglasses and ice cream and if we lived on a planet without summers, just observing a plot of sales of sunglasses versus sales of ice cream might lead us to infer that an increase in the amount of ice cream causes people to desire more sunglasses, when in fact the increase in the sales of both is caused by the warm summer temperatures. Therefore, a key part of inferring or even suggesting causation is domain knowledge. Hence when you configure an anomaly detection job, we ask the user who likely has the most domain knowledge to specify which entities in the dataset would be the likely causes of any irregularities.

A tale of two thought experiments

To determine which entities caused a given bucket to exhibit anomalous behaviors, we turn to two strategies, which both involve asking “what if” questions. Let’s first take a look at detector functions such as mean, count, and sum that are additive in nature; that is, they add up all of the individual datapoints in a bucket to compute the final number, which will be used to perform anomaly detection.

For these kinds of functions, to determine which of the influencer fields could be a potential explanation for an anomaly in a given bucket, we use so called counterfactual causation reasoning. Imagine for a second that the bucket marked in Figure 4 has scored a very low probability for mean bytes. The anomaly detection algorithm examines each of the datapoints present in the bucket and then groups them according to the value of the influencer. In the case of applications sending bytes over a corporate network, a natural candidate for an influencer value is the name of the application. Thus, we take the anomalous bucket and group the datapoints according to which app (Skype, Messenger, Outlook) generated them. 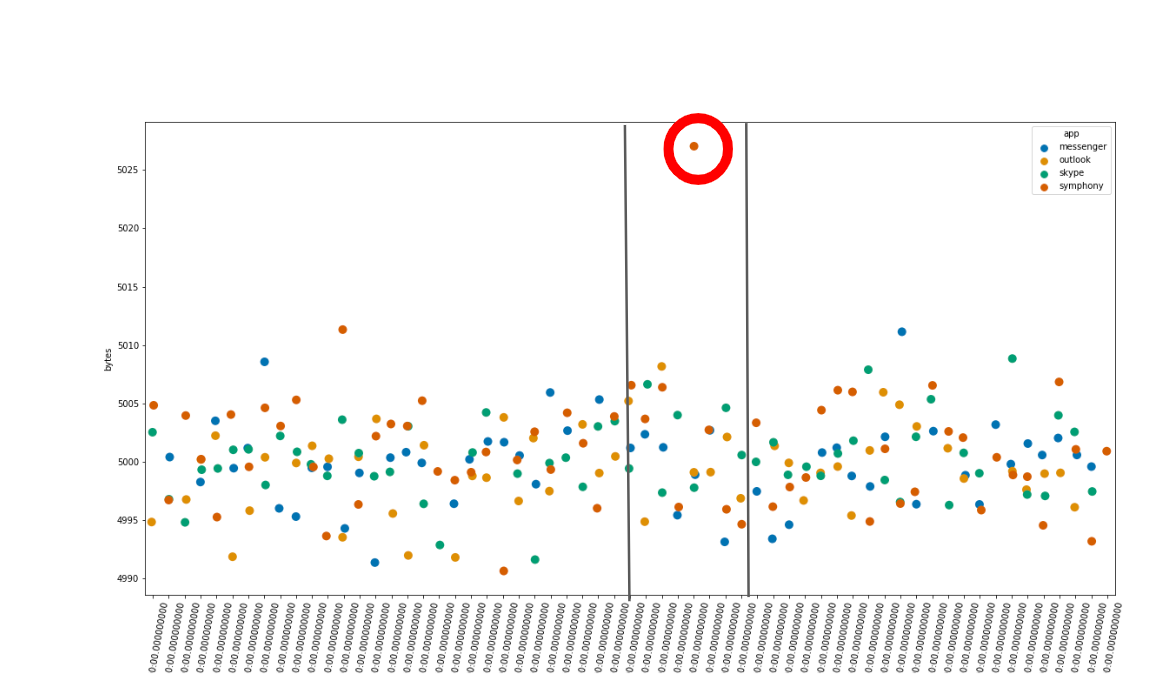 Figure 4: The anomaly detection algorithm keeps track of the influencer values in each bucket and can use those to assign blame for anomalous buckets.

Unfortunately, reasoning about what happens if some of the data were removed can only provide explanations when the anomalous value is higher than the expected value. If the value is lower, we cannot use this type of reasoning to discover which values should be in the bucket, but are missing, and thus causing the anomaly.

We also cannot use this type of reasoning for detector functions like min or max. Consider for a moment that we're interested in tracking anomalies in the number of max bytes sent in our example corporate network, and the typical values for the max bytes is 5,000 bytes over some period of time. Now suppose all of a sudden, the value in the bucket jumps to 10,000 bytes. When we examine the apps active in the bucket, we find two possible explanations. Both Skype and Messenger are sending 10,000 bytes in this bucket.

Therefore, for functions like max and min, we deploy a mode of reasoning we call regularization. Unlike in counterfactual causation, in regularization, for each possible value of the influencer, we restrict the anomalous bucket to contain only datapoints generated by the given value. In the case above, we would restrict the bucket to only contain datapoints generated by Skype. If the bucket value is still anomalous after we restrict the set of datapoints to only contain datapoints from the given influencer candidate, then we can say that this influencer explains the anomaly. Please note, that an anomaly can have more than one influencer.

One challenge with the strategies described above is that they are less effective if data is pre-aggregated before it is analyzed by the anomaly detection system. For example, suppose that prior to ingestion we pre-computed the mean of the bytes sent by each application on the corporate network and ingested the data without the information about the originating application (Skype, Messenger, and so on). This would make it impossible to uncover influencers for an anomaly.

When a machine learning system is used to augment existing decision-making processes, it is important to understand what factors influence it to come to a particular decision. In our anomaly detection product, this involves uncovering influencers — fields in the data that affect the anomalousness of the time series we are analyzing online and at scale. If you are interested in learning more about how we score influencers, please be sure to check out this blog post.