GA Release of NEST 2.0, our .NET client for Elasticsearch

This marks the first GA release of our 2.0 client with well over a 1000 commits since 1.7.1 (the currently last released NEST version in the 1.x range).

Back to the drawing board

We took some time to go back to the drawing board. NEST was originally started in 2010 and there are many choices that have accumulated in the code base that don't make sense anymore. So we stepped back to properly formalize how we see the lifetime of a call and worked off of that. Armed with the following diagram, we completely rewrote NEST's internals; The old Task Parallel Library (TPL) based code is now replaced with async/await with a much saner approach to exceptions and errors in addition to exposing enough information as an audit trail so you don't ever have to guess what went down during a call. 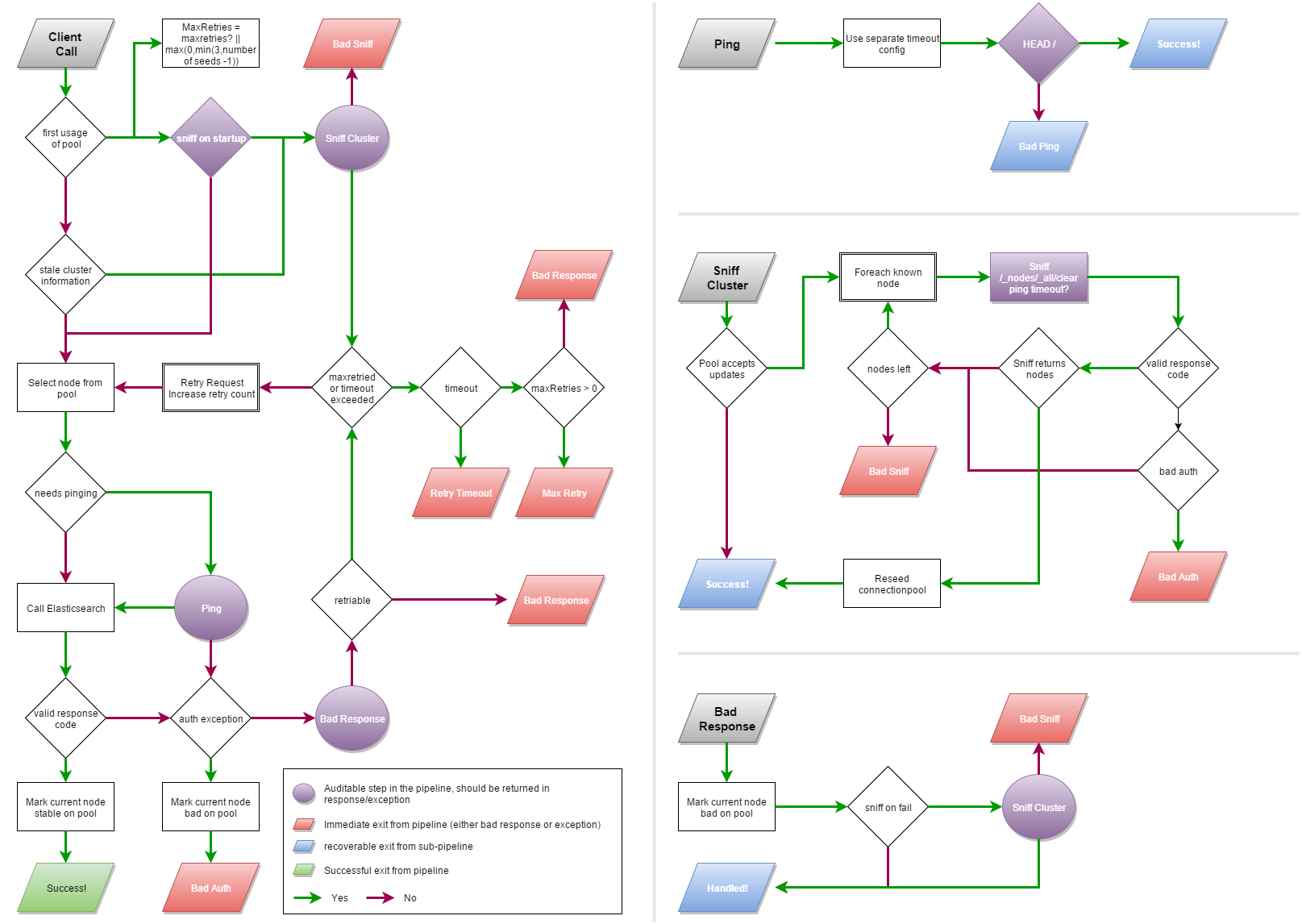 Our internals now also reflect this:

This pipeline now handles all of the failover/sniffing/pinging logic and directly reflects the flow diagram.

We also simplified IConnection down just 2 methods. This means the outer edges are clean (ITransport and IConnection) and implementing your own should be really really simple. All of these (and also IMemoryStreamProvider and IDateTimeProvider) can be injected on the constructor of the client.

Another huge endeavour is the rework of our test framework. NEST 1.x was always well tested but used 5 different test projects and 5 years worth of changing our minds as how best to write tests and assertions, thus becoming a big hodgepodge of NUnit assertions, Fluent assertions, FakeItEasy, Moq combined with several different ways to compare json with object graphs and vice-versa. Trying to write a new test quickly became an exercise in yak shaving because there was no clear cut way for how best to write said test.

So the first thing we did as part of our 2.0 branch was to completely delete all of our tests. This act of insanity gave us carte blanche during our rewrite.

As of 2.0, we have one test project, Tests, with all tests written in such a way that they can be run in unit test mode and integration test mode. Write once, run differently. All of the API endpoint tests test all four request variations - two DSL's (using fluent and object initializer syntax) with both synchronous and asynchronous variations of each. We also test all of the moving parts of the Elasticsearch DSL (Aggregations, Sorting, IndexSettings, etc) in the same way.

In addition to the more formal unit and integration tests, we also implemented a thing we dubbed Literate Testing to allow us to write tests in a more story telling form, with multi-line comments serving as the narrative for our asciidoc documentation while using the Roslyn compiler to pick out the interesting bits of code. This gives us the benefit of always compiling our documentation in addition to having only one place where we document, test and assert how a piece of code is supposed to work.

Another huge component of our testing framework is the Virtual Cluster that allows us to write tests for any situation and how we expect the client to behave.

This showcases the Virtual Cluster tests combined with Literate Tests and the extensive audit trail information available on each response (or exception).

I'm pleased to say we are back at a decent coverage rate (60%) and will continue to iterate and improve this.

Another big change in NEST 2.0 is how we deal with exceptions.

In NEST 2.x, exceptions are much more deterministic. The former ThrowOnElasticsearchServerExceptions() setting has been replaced with the more succinct ThrowExceptions(), which determines whether the client should ever throw an exception or not (client side and server exceptions). Furthermore, the types of exceptions have been reduced and simplified down to three types of exceptions:

ElasticsearchClientException: These are known exceptions, either an exception that occurred in the request pipeline(such as max retries or timeout reached, bad authentication, etc...) or Elasticsearch itself returned an error (could not parse the request, bad query, missing field, etc...). If it is an Elasticsearch error, the ServerError property on the response will contain the the actual error that was returned. The inner exception will always contain the root causing exception.

A pretty complete list of breaking changes are available:

Here we'll just highlight a couple features that are reflected in the NEST changes to whet your appetite!

In Elasticsearch 2.0, query and filter constructs have merged into one concept called queries and NEST 2.0 reflects this. So if you were previously using the AndFilter, this is now the AndQuery; beware however that some of these filters have been obsoleted and chances are high you were using them wrong!.

In NEST 1.x we took pride in being a 1-to-1 mapping with the Elasticsearch API. In some cases however, this purity hid the real depth of parameters. As an example,

in NEST 1.x you could add sorts on Search() using:

in NEST 2.0 you have to stoop down a level first in order to access the same functionality

This encapsulates all of the sort options properly and adheres stricter to the 1-to-1 mapping. NEST 1.x did also contain this full descriptor however the mix and matching of the convenience methods of the parent meant that some fluent methods were additive whilst others overwrote what was previously set. With NEST 2.0, this discrepancy is gone!

This happens in more places e.g index settings and mappings.

With the removal of filters, NEST has added a special construct in its Query DSL to easily create a bool query with a filter clause

You can even combine + with !

This will wrap the term query inside a bool filter and subsequently inside a bool must_not clause. This approach also works with the object initializer syntax (OIS)

The single ElasticPropertyAttribute has been broken up into individual attributes per property type.

For instance, the following:

Aside from a simpler and cleaner API, this allows each attribute to only reflect the options that are available for the particular type instead of exposing options that may not be relevant (as ElasticPropertyAttribute did).

If you are using C# 6 you can also statically import the Infer static class using using static Nest.Infer, allowing to write

so on and so forth. If you are using the fluent API using these infer methods is not required since the fluent API is strongly typed through lambda expressions, but they are another tool at your disposal nonetheless.

The 2.0 release has been released with a dotnet5.1 version on nuget that can be used on both the Desktop and Core CLR runtimes of DNX rc1. We are actively tracking rc2, the .NET Commandline interface (dotnet-cli) and the new netstandard NuGet target framework, with a plan to release compatible packages once these hit the scene.

We'd like to thank everyone who took the alpha and rc releases out for a spin and provided invaluable input while we incubated the 2.0 release. A special shoutout to Blake Niemyjski for sharing his screen with us so we could see firsthand where the pain points were during an upgrade from 1.x to 2.0.

As always we very much welcome all feedback on our github issues page.