Which Korean analyzer shall I use?

Hangul (Korean alphabet) was created in 1443 by King Sejong the Great. Before that, Korean people used Chinese characters but only Yangban, the ruling class people could actually learn and use it and the ordinary people could hardly use it because Chinese language is so different from Korean language and it was too difficult for the ordinary people to spare time to learn.

A Korean analyzer is required to search Korean documents effectively. Korean is an agglutinative language whereas English is an inflectional language and Chinese is an isolated language. A predicate changes its form according to its ending (e.g., ‘먹다’ and ‘먹고’), and a noun is usually followed by one or more postpositions (e.g., 엘라스틱서치(noun)+를(postposition)). If we query without a Korean analyzer, we can only get a single form of the predicates or nouns. For example, if we query ‘엘라스틱서치’, we don’t get the documents including ‘엘라스틱서치를’. A Korean analyzer analyzes ‘엘라스틱서치를 이용해서 한국어 문서들을 효과적으로 검색하려면 한국어 분석기가 필요합니다’ and extracts tokens such as ‘엘라스틱서치’, ‘를’, ‘이용’, ‘해서’, ‘한국어’, ‘문서’, ‘들’, ‘을’,  ‘효과적’, ‘으로’, ‘검색’, ‘하려면’, ‘한국어’, ‘분석기’, ‘가’, ‘필요’, and ‘합니다’. With these tokens, we can query ‘엘라스틱서치’ and get the documents including either ‘엘라스틱서치’ or ‘엘라스틱서치를’.

To see the effect of the JIT compiler, I ran the same test twice when I measure the analysis time. I used ‘time’ (http://man7.org/linux/man-pages/man1/time.1.html) to measure time to analyze a Korean text (see at.sh, ot.sh, and st.sh in the appendix). I ran it once just after starting Elasticsearch, and then ran it again without restarting Elasticsearch. 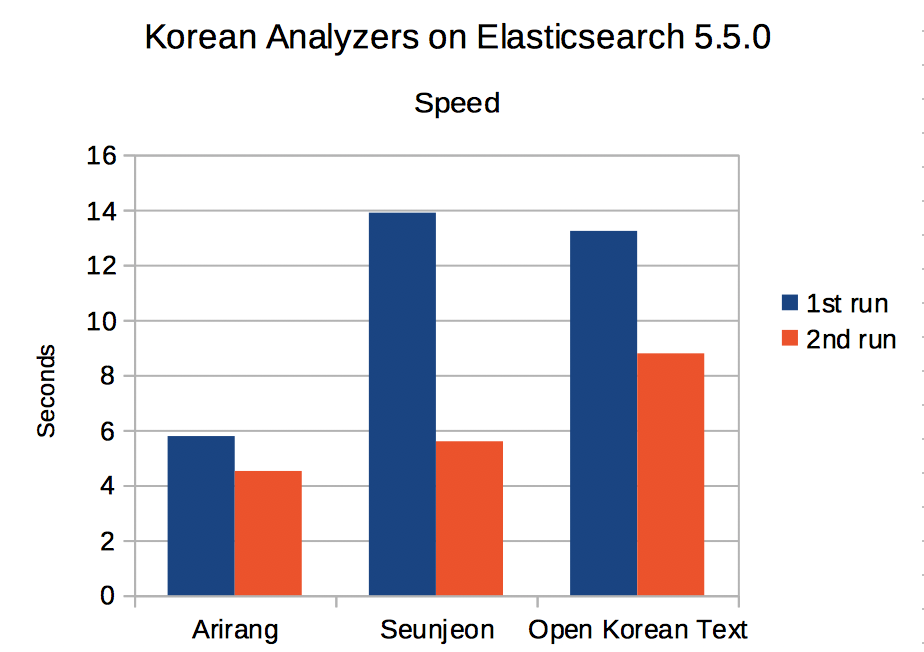 Arirang is the fastest in the both runs, but the 2nd run of seunjeon is much faster than its 1st run. Open-korean-text is similar or a bit slower than seunjeon.

Memory (Java heap) consumption was measured at the three points: just before the analysis, maximum usage during the analysis, and just after the analysis. I used ‘jstat -gc’ (https://docs.oracle.com/javase/8/docs/technotes/tools/unix/jstat.html) to measure the memory consumption (see am.sh, om.sh, and sm.sh in the appendix). Again, I ran the same test twice. I ran it once just after starting Elasticsearch, and then ran it again without restarting Elasticsearch. 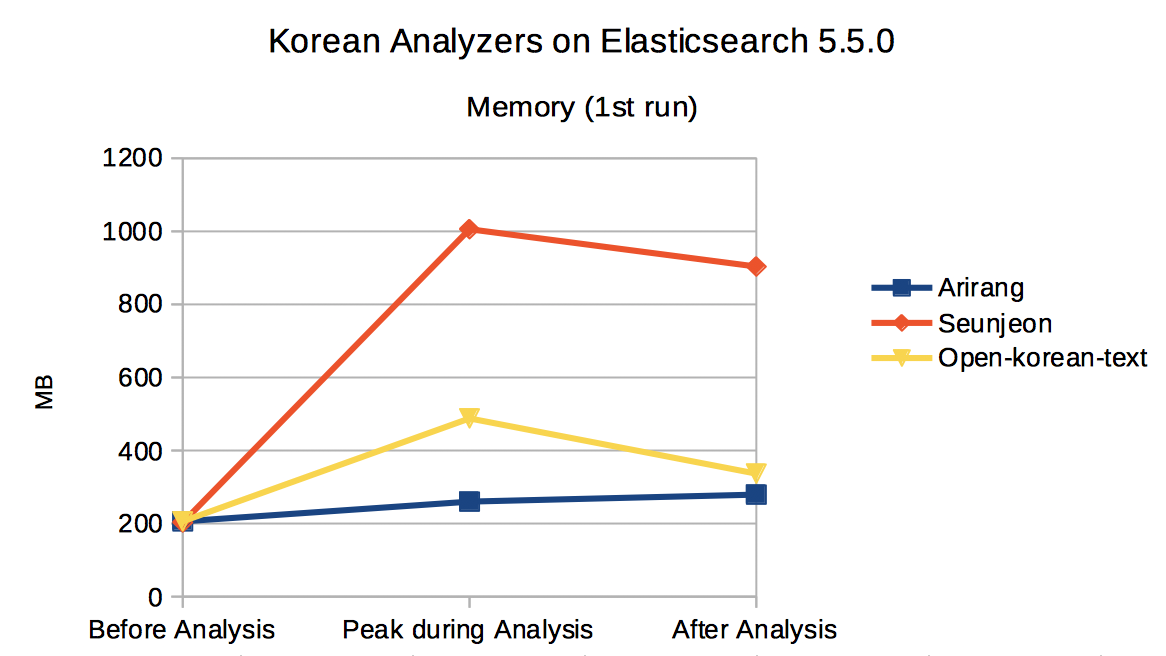 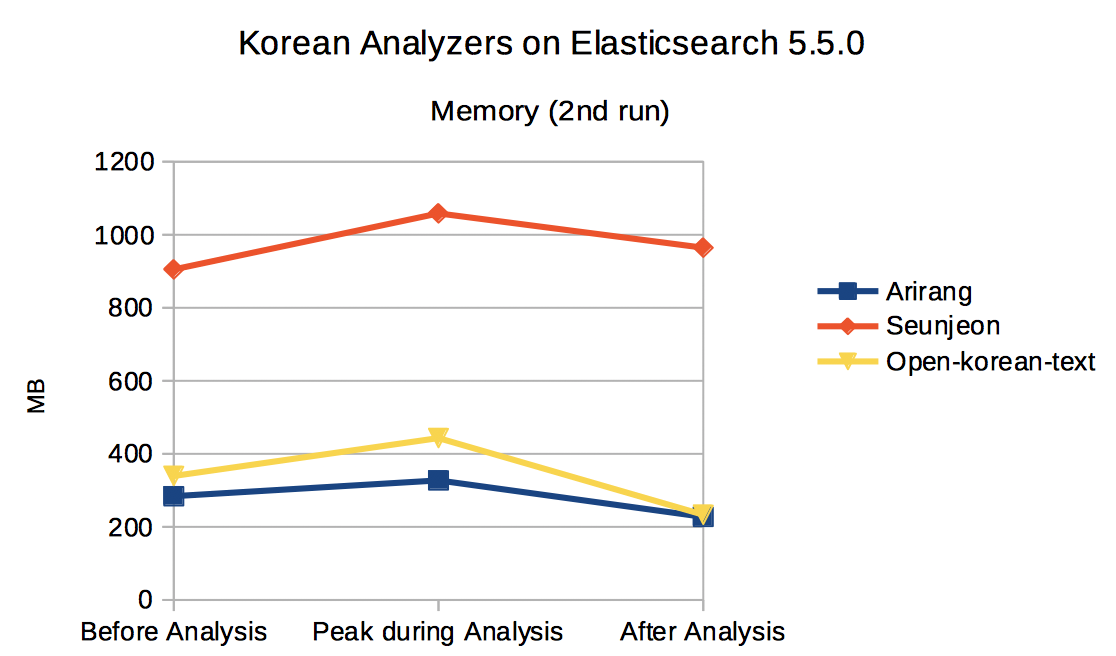 Finally let’s see the analysis results. The original string is the preface King Sejong wrote when he invented Hangul. I used the same string for the time and memory consumption test. 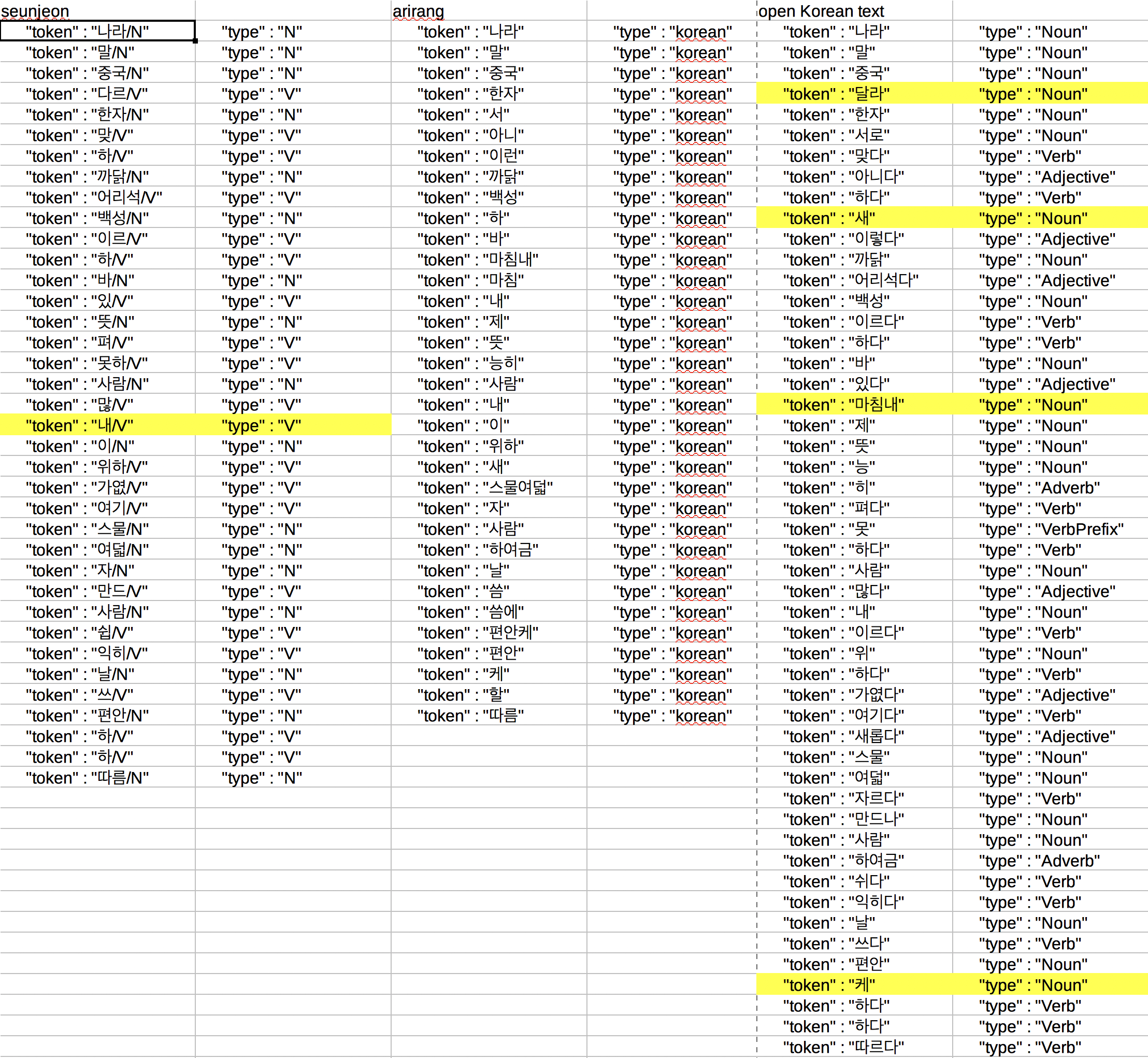 Based on this test result, no one Korean analyzer seems to be absolutely superior. Arirang can be a good candidate when speed and memory consumption is important. But you’ll have to use seunjeon or open-korean-text if you need the part of speech information. One thing to remember is that Korean analyzers take considerable amount of time and memory during indexing and the choice of Korean analyzers is very important in your Elasticsearch configuration.