We continued work on cancelling searches focusing on concurrency. We fixed several issues that prevented the channel from being released properly in the REST layer. We also added several tests to ensure that we're not leaking objects while checking whether channels are closed.

We finished implementing the functionality needed to handle results pinning in the query DSL. We are now adding the feature to the high level rest client in order to make it available for Java users.

Recovering a new or existing replica is done through peer recovery, the process of syncing the content of the replica with the primary shard copy. Depending on the data that already exists on the replica and the data that's available on the primary, this can be an incremental process. Operation-based (a.k.a. sequence-number based) recoveries allow a replica to catch up to the primary by replaying the history of operations that the replica missed while it was offline. This, however, requires the primary to retain said history in order to enable operation-based recoveries. Retention and replay of the history for operation-based recoveries is currently done by the translog, controlled through time- and size-based retention policies.

Replicas can also have operations that do not exist on the primary. Imagine a scenario where you had a primary with two replicas, and an operation was replicated to one of the replicas but not yet to the other one. With concurrent out-of-order replication, replicas can contain disjoint sets of operations at a given moment in time. If the primary crashes at that point, independently of which replica is promoted as primary, it might not have a superset of the operations on the replica. In order to allow the replica to be efficiently realigned with the primary through operation-based recovery (i.e. copying over the missing operations), Elasticsearch uses the notion of a safe commit. It is a durable (Lucene) snapshot of the data which only contains operations that are available on all in-sync shard copies, i.e., those shard copies that contain all acknowledged writes. As the primary is only chosen among the in-sync shard copies, a safe commit has therefore a subset of the operations on the primary. A replica will use its safe commit as a base state to realign itself with the primary. Safe commits are not explicitly created by the system, but are promoted out of regular Lucene commit points once a replica learns that the global checkpoint has advanced past all operations in the commit point. The global checkpoint is a safety marker, denoting that all operations up to this sequence number are durably stored on all in-sync shard copies. The safe commit also has an associated local checkpoint that denotes that all operations up to this sequence number have been applied to this Lucene snapshot. The snapshot might contain additional operations, however, but those are guaranteed to be below the replica's knowledge of the global checkpoint.

Today, when initiating a peer recovery, the replica uses the local checkpoint of the safe commit as starting point to request missing operations from the primary. The primary checks if, with the given starting sequence number, it can serve the full range of operations from its translog, depending purely on time- and size-based retention policies. With peer-recovery retention leases, we would like to track retention on a per-need basis. This is achieved by creating a retention lease in the system for each shard copy that tracks its starting sequence number that it would use in case where it had to initiate an operation-based peer recovery. Shards would then use these leases to decide on how much history to retain to enable operation-based recoveries of other shard copies. As the starting sequence number is based on the local checkpoint of the safe commit, this information would now need to be periodically exchanged in the system to update the retention leases.

We opened a number of PRs to optimise memory usage in our transport implementations. This ranges from optimizing Netty frame decoding to removing unused fields as well as other optimizations for both StreamInput and StreamOutput classes.

We adapted the remote cluster connection facilities to asynchronously connect to remote clusters. This was the last missing piece to close out the resilience meta issue to avoid blocking threads waiting for connections.

The Kibana team recently implemented a change to make it possible to explicitly configure the name of the Elasticsearch SAML realm in Kibana.

When a Kibana user attempts to authenticate via SAML, we need to decide which SAML realm to use. Until now Kibana indicated that by providing the URL on which it was listening. This works fine when Kibana is on localhost with the standard port, but would require very precise configuration for more complex setups, such as when Kibana was behind a proxy. Now, users just need to provide Kibana with the name of their ES SAML realm.

We also see a lot of SAML setup problems when there is a mismatch between the Entity ID configured in Elasticsearch and the Identity Provider (such as Okta). SAML uses URIs as identifiers, but people often think of them as URLs and assume that IDs such as http://example.com:80 and <http://example.com/> will be considered equal. We improved the error message and logging for this scenario to try and make it easier to understand what's going on.

We moved geo shape generation methods into the test framework and switched it to Lucene's more robust GeoTestUtil. This should allow us to generate realistic random geoshapes in other tests.

We fixed a bug in the auto interval date histo aggregation that was causing an incorrect number of buckets to be returned.

The CLI tools included with Elasticsearch (e.g. plugin or keystore tools) run with default JVM settings. Normally, a user would not run these tools at the same time as Elasticsearch, so those settings have not been a problem. However, with the introduction of the reload secure settings API, the keystore tool is now expected to be run while Elasticsearch is running. This can cause issues in container environments with restricted memory.

We introduced explicit JVM options for our CLI tools. In particular, the heap now starts at 4mb and maxes at 64mb. The ES_JAVA_OPTS environment variable is respected, so they can be overriden if necessary. This also exposed an issue with how the plugin CLI install command loads the entire plugin into memory in order to calculate a checksum for verification, which we fixed by buffering the plugin contents.

When Elasticsearch is started as a systemd service, the system assumes it is ready immediately after forking. This can cause problems for downstream services which are launched before Elasticsearch is actually ready for requests. Systemd provides a mechanism, sd_notify, for services to notify the system when they are ready. We added a module to our rpm and deb packages which invokes the sd_notify after Elasticsearch has finished starting up.

We have completed the removal of Streamable from the codebase, the culmination of a multi-year effort. All classes implementing Writeable now have a constructor that takes StreamInput. This was also completely backported to 7.4 to ease other backports.

Alison submitted a PR that adds the details panel to the Index Templates UI. This continues the work she started a few weeks ago that added the list of Index Templates as a tab in the Index Management app in Kibana. Index Templates is a set of Elasticsearch APIs that allow users to automatically apply settings and mappings to new indices when they're created.

Jen submitted a PR that adds the ability for users to delete and execute their Snapshot Lifecycle Management (SLM) policies from the UI. This continues her work from last week that added a list of SLM policies and detail panel to the Snapshot and Restore app in Kibana. SLM policies allow users to automatically create backups of their data on a predefined schedule, but taking snapshots outside of that schedule is useful as well. By executing a policy, users can take a snapshot right away without having to redefine their configuration. 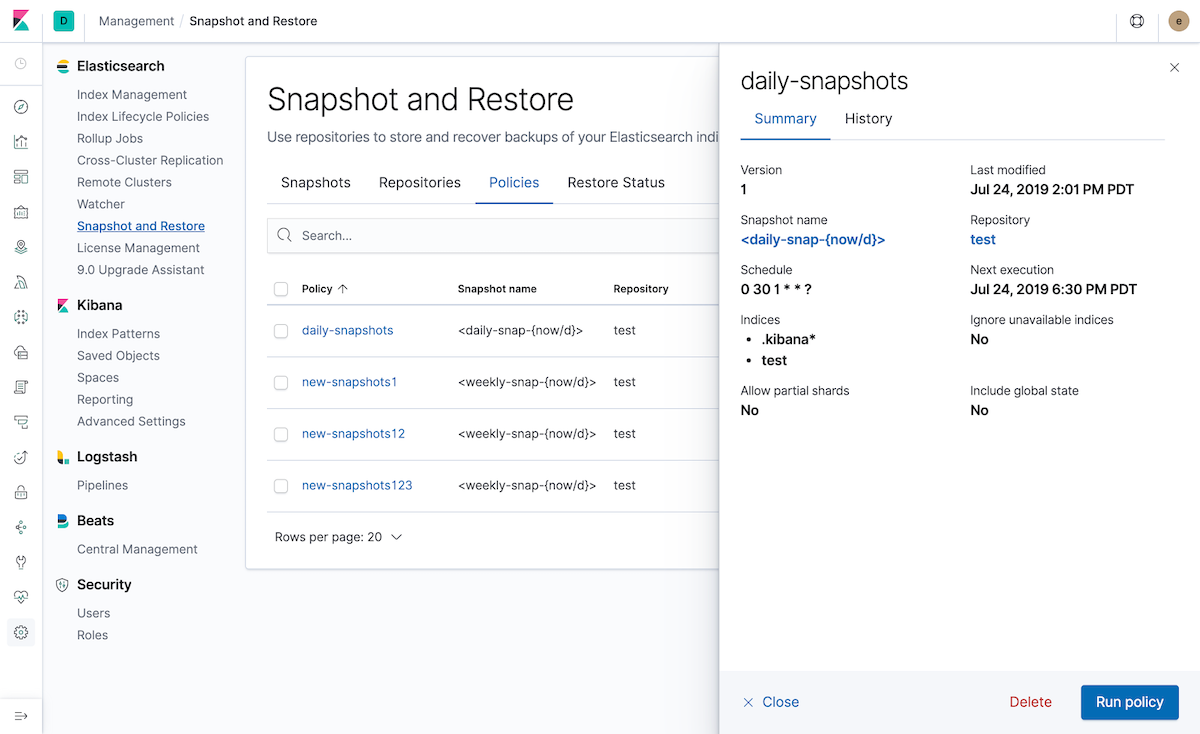 Lucene 8.2 was just announced and Elasticsearch is already on it. This release notably features a stemmer for Estonian, support for indexing cartesian geometries, better handling of duplicates with points, and faster conjunctions and phrase queries in some cases.

Our support for BKD trees makes the assumption that all dimensions are independent, which is not always true, especially when used to index range fields or geo shapes. Removing this assumption could make some queries faster, but it always makes indexing significantly slower, so we need to discuss the trade-offs.

As you might know, Lucene recently gained the ability to move the terms index off-heap. We are now exploring doing the same with the index of our KD trees. Benchmarks suggest that moving the index off-heap doesn't cause any performance penalty, so we might load it off-heap all the time and save memory for all indices.

How to organize spatial-related code is proving controversial: should we have everything in a module or the main features in core and more esoteric features in a module?

JapaneseTokenizer allows corrupt user dictionaries, where concatenating segments doesn't give back the original surface form. This sometimes triggers errors at index time or when parsing synonyms.

When collecting multiple slices in parallel, could we still share some information between collectors so that they can reduce the amount of work they need to do?