Elasticsearch 6.0 ships with two great improvements to help minimize index storage size. The best part about the improvements is they will require no special configuration changes or re-architectures, and in most cases will only require a simple upgrade and a newly created index. To illustrate the improvements, we’ll use Metricbeat, a lightweight tool for ingesting metrics into Elasticsearch.

The test above used Metricbeat with the System module.

Using the “_all” field, it was easy to search across all fields, however, we’re now duplicating a lot of values, and using more storage space:

With the deprecation of the “_all” field in Elasticsearch 6.0, we save space on indexing duplicate data. And if “_all” field functionality is still needed, the copy_to parameter should still be used in the index mapping.

We ran a follow-up test to look at the effects of disabling “_all” in relational to the storage improvements we saw. When isolated, the deprecation of “_all” accounted for almost 40% of our index saving improvements (the other 60% was due to the sparse field improvements we’ll visit next).

If you recall, doc values (the columnar data store in Elasticsearch) have allowed us to escape the limitations of JVM heap size to support scalable analytics on larger amounts of data. Doc values are a very good fit for dense values, where every document has a value for every field.  But they have been a poor fit for sparse values (many fields, with few documents having a value for each field), where the matrix structure ends up wasting a lot of space.

If you’re unsure of what a sparsely populate field is, it’s a field that contains a value for a small percentage of documents. For instance, if we go back to our user profile example, the “middle”, “city”, and “state” fields may only be present in a few of the documents:

Internally, Lucene 7.0 (which ships with Elasticsearch 6.0) retrieves data within doc values as an iterator, which allows for more efficient data storage behind the scenes (especially for sparsely populated values): 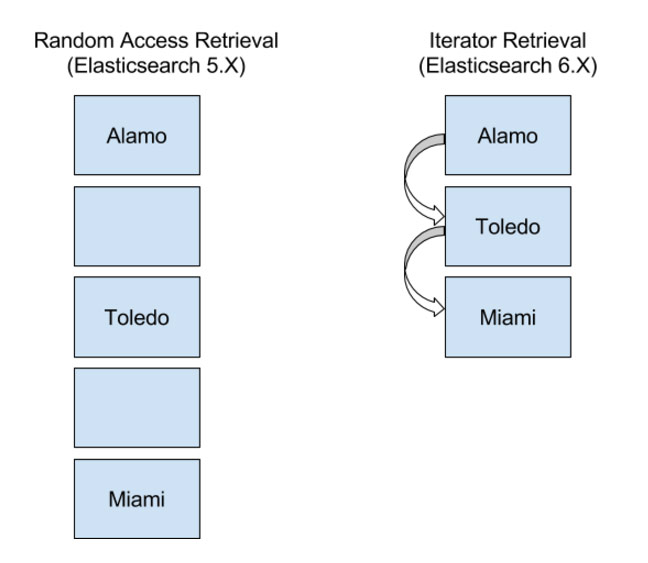 In addition to storage improvements, the iterator-based retrieval method for sparsely populated fields has a number of performance improvements, including indexing speed.  Sparse fields should still be avoided when they can be, as dense fields are the most efficient.  More details can be found in LUCENE-7253.