Meet our first Elastic Certified Professional of the Year

Flávio Knob and wife, Graciele, are expecting their first child this summer. What they weren’t expecting was Flávio being named the first Elastic Certified Professional of the Year.

It’s a well deserved honor going to one of the hundreds of Elastic Certified Engineers who exhibited exemplary mastery of the Elastic Stack. The award also demands that honorees mentor others about the Elastic Stack. In addition, award candidates must get recommendations from their peers.

“Becoming an expert in the Elastic Stack has really changed my life and is opening up new possibilities,” says Flávio, who concedes that he stumbled upon the Elastic Stack when his employer asked him to enhance their website’s search function. “I was told to use Elasticsearch, and I’m happy I did.”

Many of the candidates for the honor submitted outstanding award applications. But Flávio’s nomination stood out from the pack.

“I was happy to see so many worthy applicants for the first Elastic Certified Professional of the Year award,” says Rich Raposa, Senior Manager of Certification at Elastic. “The competition was close, and everyone had great recommendations. I think what made Flávio’s application stick out was his impressive presence in the community. He does an amazing job sharing his Elastic knowledge through blogs and meetups, which very much reflects the spirit of this award.”

Elastic honored Flávio with the award before a packed crowd on March 4, 2020 at the Elastic{ON} Tour event in San Francisco. 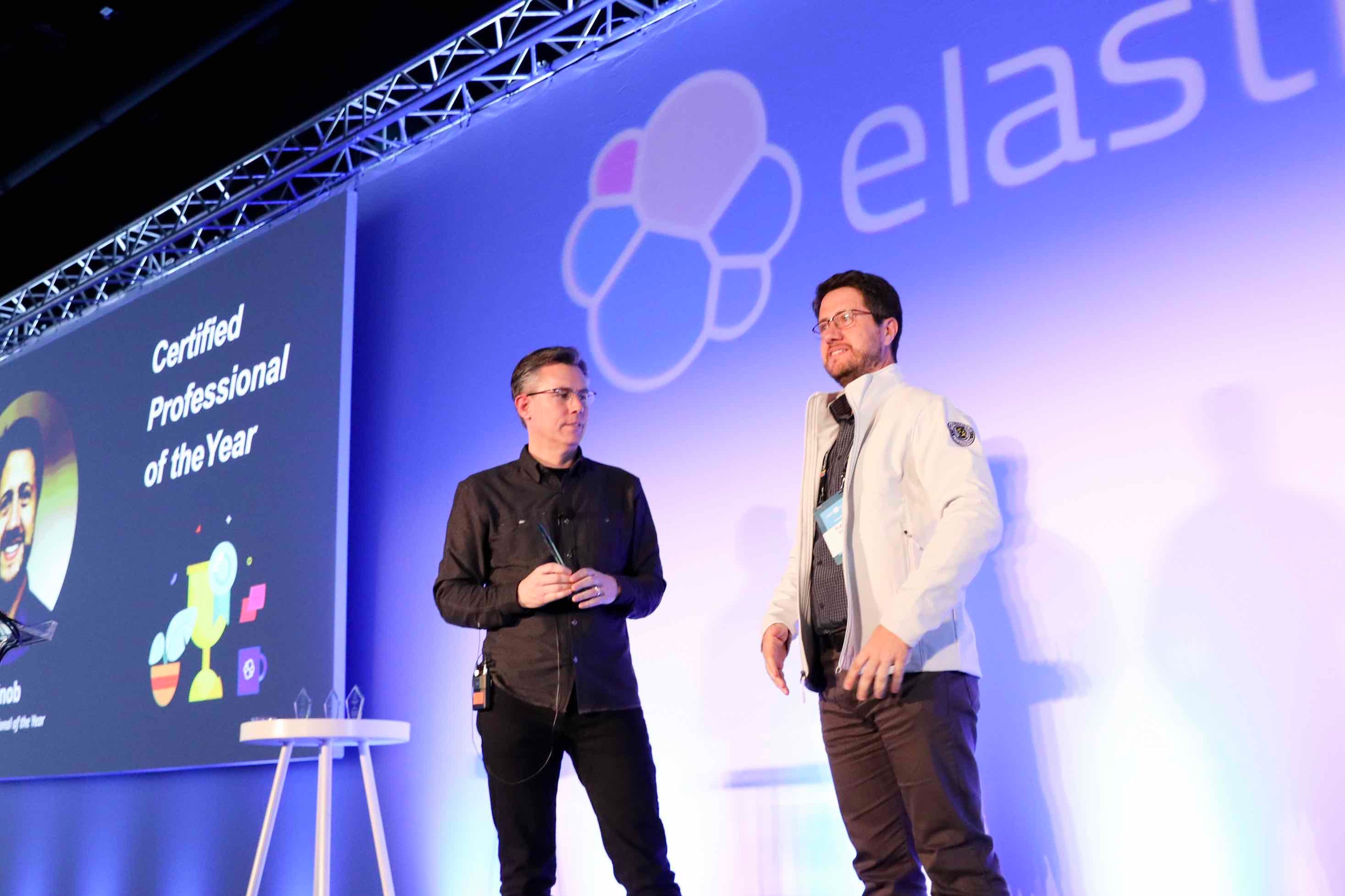 Flávio Knob, at right, showing off his new Elastic Certified Professional of the Year jacket at the Elastic{ON} Tour event in San Francisco. The honor was presented by Rich Raposa, Elastic's Senior Manager for Certification.

Flávio, 38, works for a state government in Brazil as a financial auditor and software developer. He became an Elastic Certified Engineer last year.

Flávio has harnessed the Elastic Stack for multiple projects at his workplace—the Tribunal de Contas do Rio Grande do Sul. He’s a local Elastic community organizer for the Elastic Meetup in Porto Alegre, where he lives in the south of Brazil. In 2019, he organized 10 Elastic community meetups, which had up to 40 people for each meeting. He’s written 17 articles related to the Elastic Stack. He has experimented with contributing to Elastic projects by sending pull requests for Kibana, and he’s even written a Logstash output plugin.

If that’s not enough, he is participating in a pilot “Elastic Contributor Program” in Brazil. It should come as no surprise that Flávio is currently in first place.

But it doesn’t end there. Elastic received some really awesome recommendations on behalf of Flavio winning the award.

What others are saying

Samir Merode, a developer at Tribunal de Contas do Rio Grande do Sul, said Flávio built a search feature for the court’s website with Elasticsearch, and the site “got better results in an almost imperceptible amount of time.”

“In our other project, Flávio introduced us to Elastic APM. We now monitor app metrics and failures, which prior to that was only possible searching across log files,” Samir says.

Another co-worker, Francine Carniel Trevisan, says Flávio is “definitely a reference in our organization when it comes to search and it is my opinion that he truly deserves to be honored with the Elastic Certified Professional of the Year award.”

Congrats to Flávio and the Elastic community at large!