Kerberos is one PR review away from being merged.

Progress was light this week with Dev Ramp and vacations. Work continued on #38444, which is a prerequisite for this feature. We also opened what should be the final prerequisite, #39674, which is ready for review. This feature is at-risk for 7.3, and will likely slip to 7.4.

Platform team is working together with the Security team to land authentication migration to the New Platform. Also, we are focusing on formalizing Http Service contracts: a new RFC for route handler interface is waiting for feedback. Please, have a look by the end of next week.

Exposing the Saved Objects client to public (client-side) plugins is in the final stage.

The team also has started working on License service. The license service will provide a single source of truth for answering license-related questions, such as activation and expiration. This will eventually replace the xpack_main plugin.

Over the last week we reintroduce the cache-loader changes after the fix release for a bug in the upstream release. We have also started an initiative that aims to provide readmes for every local package where one is missing. Worth to mention that we are not running the typecheck task as part of our build anymore, we are just running it in our CI. Finally we also provide the usual support for other teams.

The work on elastic-chart continued this week by re-organizing the existing codebase to make space for the new chart types. It’s undergo the PieChart implementation (#244).

A new feature is under review: stack series in percentage mode (#250).

This week we continued to work on fleshing out existing features. The data table visualization type was merged in. Even though we don’t have merged everything into our feature branch yet, we are very close to do so for loading and saving visualizations, UI polishings, split series support for xy charts and more. The next big task will be with integrating Lens with dashboards and the filter bar which we started working on. 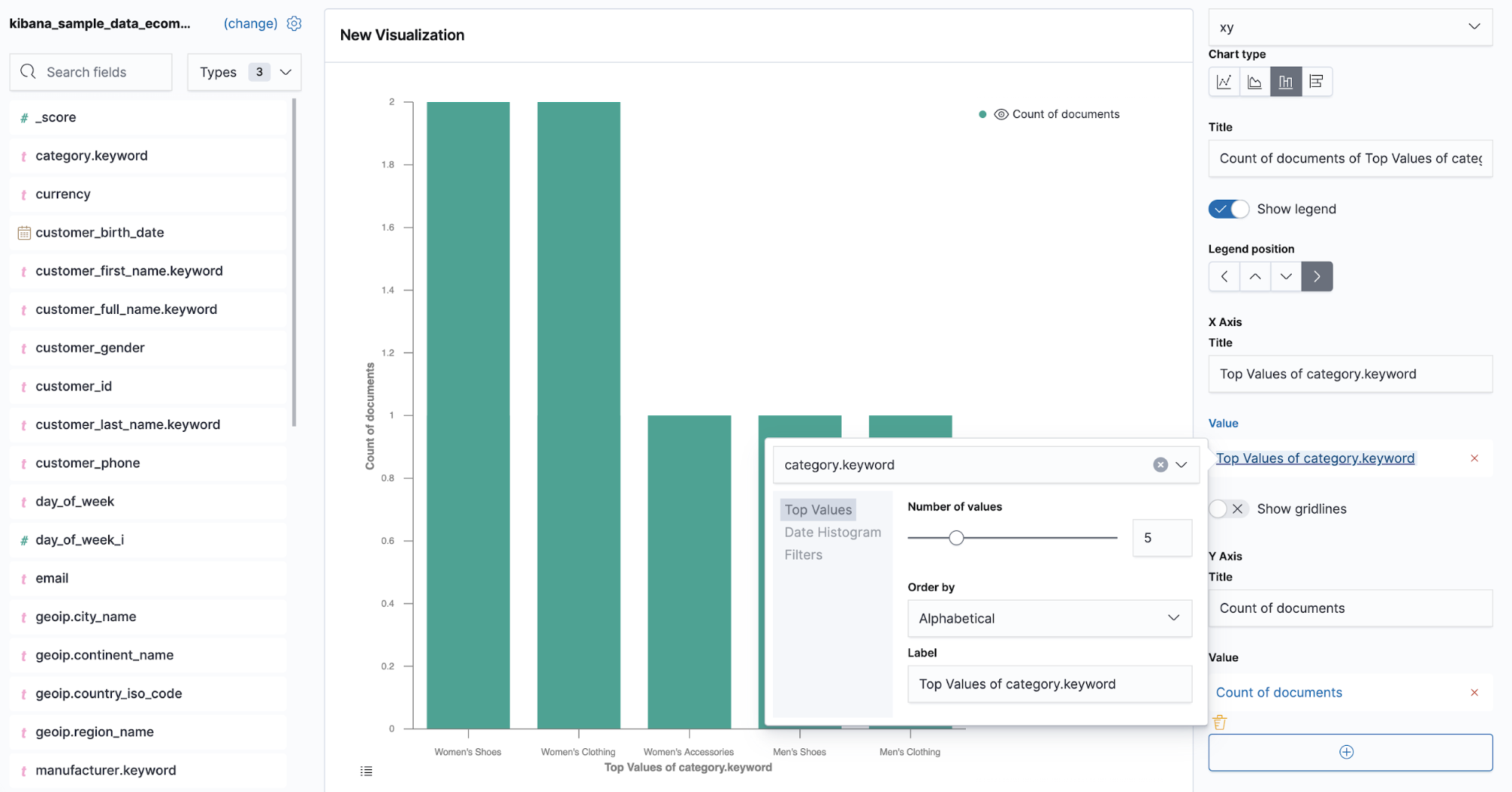 A lot of the POC styling form Caroline could be re-used (thanks for that!)

We cleaned up the graph visualization POC and added node annotations and a tree view for multi-bucketed aggregations. 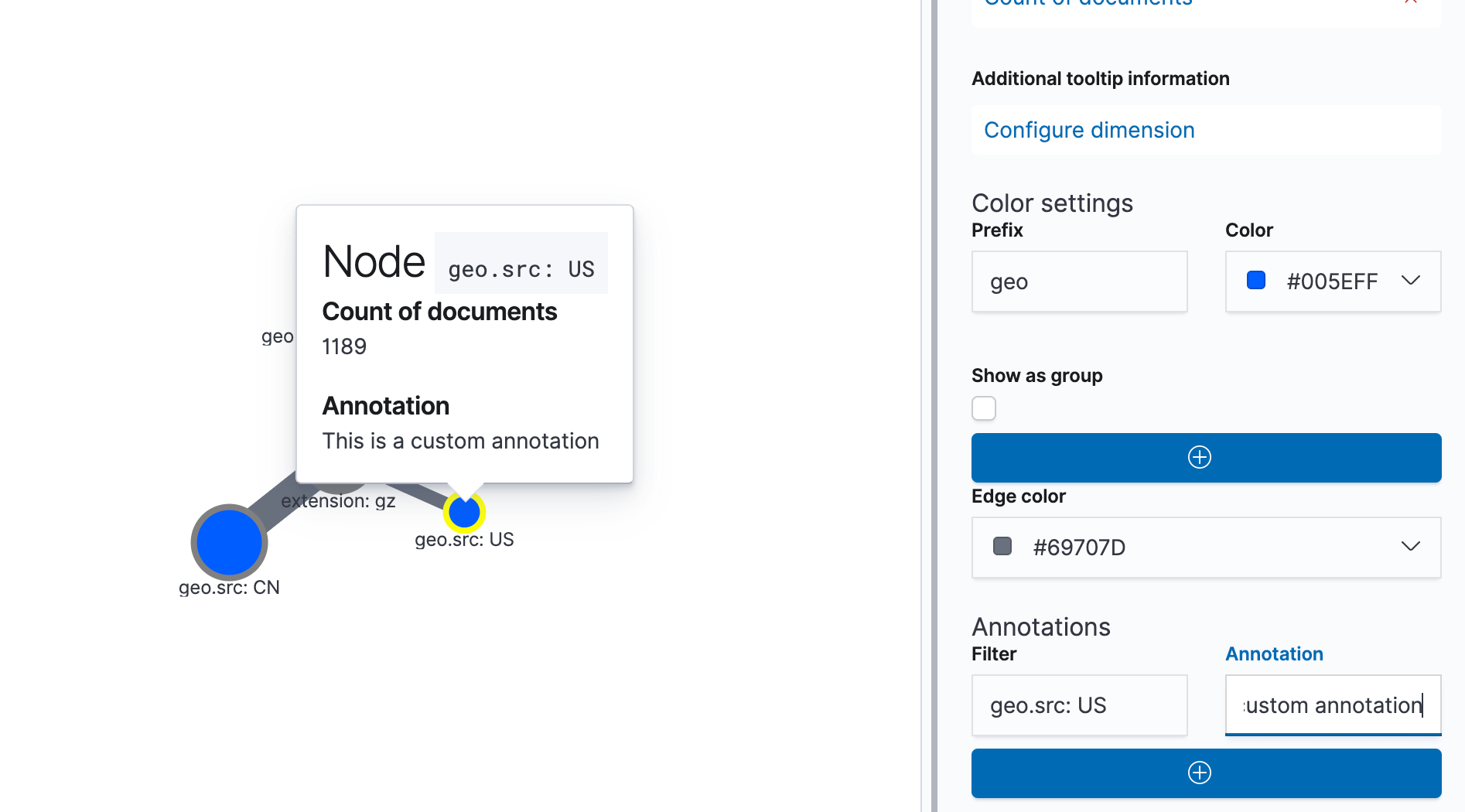 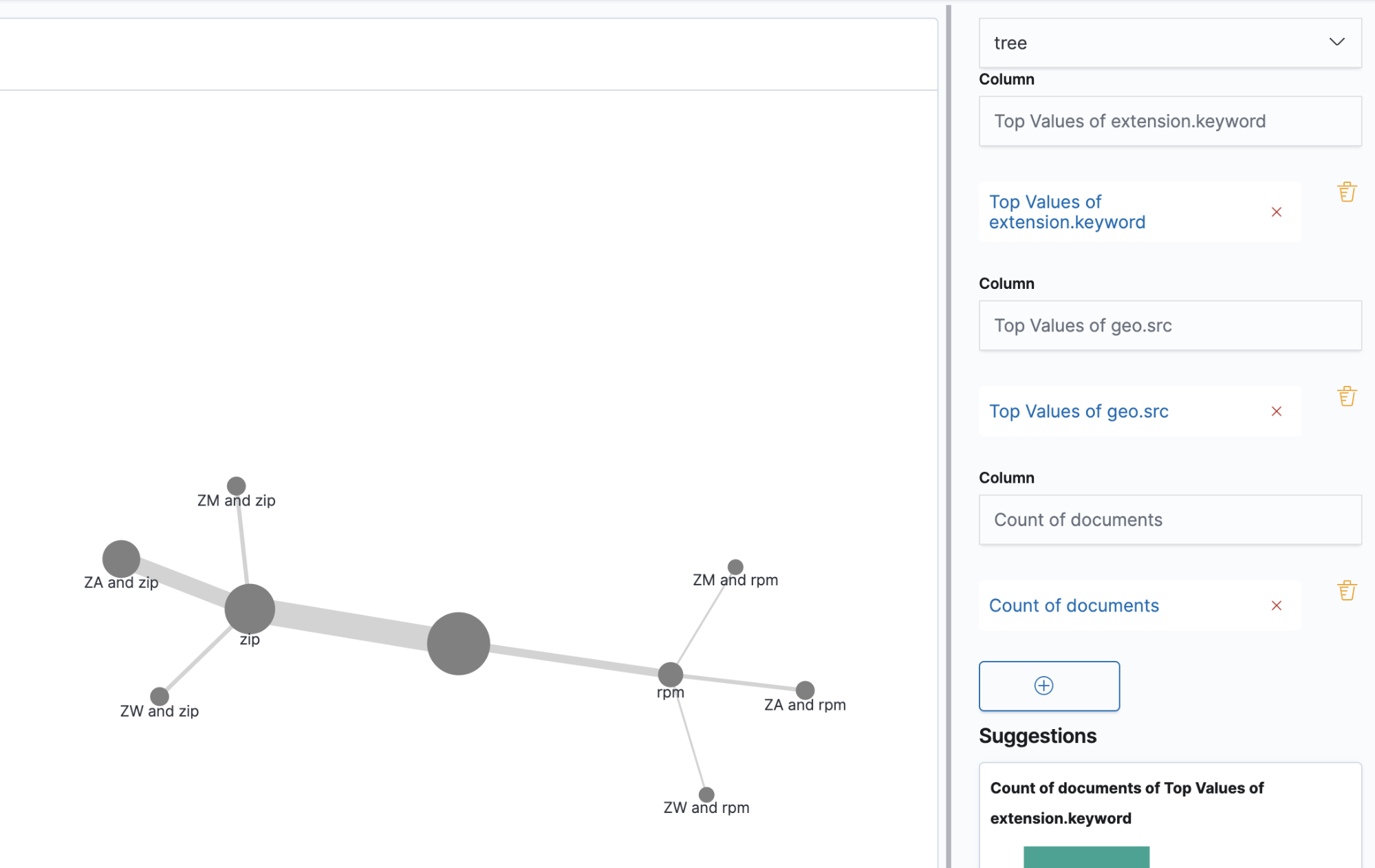 Luke Elmers states this week, “Gave a canvas & expressions deep dive talk at the elastic Denver meetup tonight. Lots of positive comments from folks who hadn’t seen much of Canvas yet. Just wanted to say thanks for building a product that’s so easy to demo, and keep doing your thing.”

This is great feedback, and exactly what we are trying to do with Canvas.  Make beautiful software that demos well and inspires more people to use the Elastic stack.

We took time this week to solidify our 7.3 release product marketing notes, ensure we’re on track, push all the way to the end, and also plan for 7.4.

We have a close to final update from marketing, and are ready to start mocking up the next generation of Elastic office displays using Canvas.  Here is what we’re working with. Big round of applause to marketing, and now the team’s turn to mock them up. 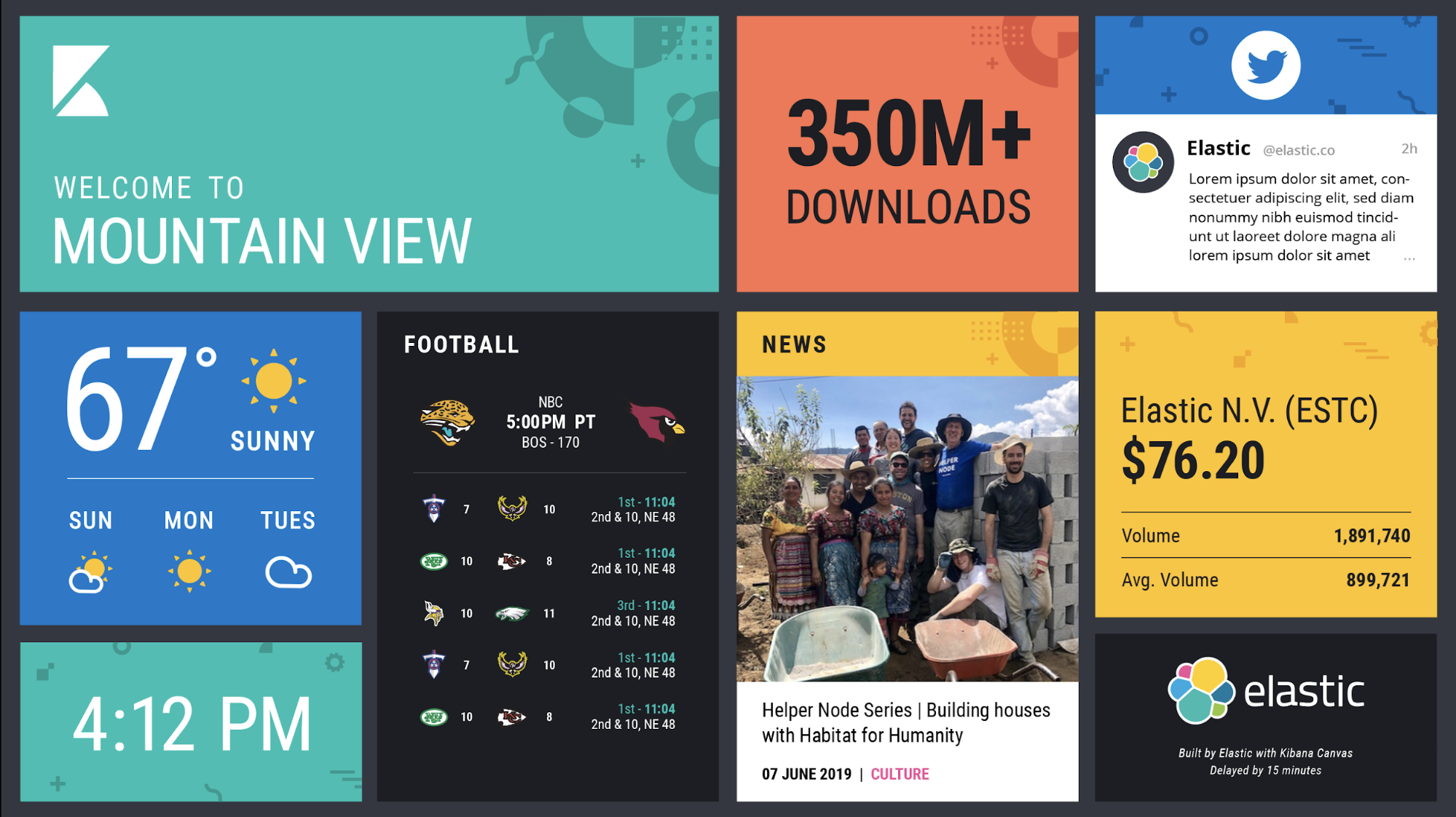 This week we finished cleaning up the semantics of the metricVis expression function, and are fixing a bug we found with the handling of custom visualization types in the interpreter.

We are wrapping up the first phase of work on a new, low-level search API to replace Courier, which is currently in review. We have been finalizing an advanced setting that controls whether Courier batches requests. There’s also a PR up for cancelling search requests in Discover when a new search is made. This will work nicely with the PR in Elasticsearch to actually cancel the associated tasks in Elasticsearch when a connection is closed.

We're pushing ahead on Phase I of the migration process, and are preparing to merge shimmed plugins for various vis types, including TSVB and Markdown.

We're about to merge a completely overhauled Filter Manager into the data plugin's filter service. We managed to de-Angularize and rewrite the service from the ground up… all while maintaining a fully backwards compatible API!

In the background, we have continued work on de-Angularizing more pieces of Kibana, and Vadims has been exploring what it looks like to move some services entirely into the New Platform, starting with the interpreter.

As our shimmed plugins begin to grow and have more functionality added, we've started to clean up the way they are structured so that we can have a consistent set of conventions in place across our various plugins.

Most of the team was out last week with vacation season so we’re light on updates. Majority of our work was around cleanup of views before 7.3 hits feature freeze.

We updated Kibana to use the latest EUI release (a major bump was required now that core-js was removed as a direct dependency)and as usual it should be locked down now for feature freeze. Any bugfixes will be made through patch releases on 12.2.x.

We’re jumping in to help out on ingest’s Fleet project. It’s early and most of the work is centered around getting a grip on the application flow, but will be moving soon to some wireframe work to help that team out.

We’re planning a meeting around the new data grid component once everyone gets back from the 4th but did an internal meeting to review our current spec,  which includes our previous PoCs.

Don’t usually announce new icons in these emails, but figured these were generic enough people might have used for them. We added a bunch of new alignment icons to our set, which should help for any teams that need to handle positioning of elements. These are available in Kibana for use now. 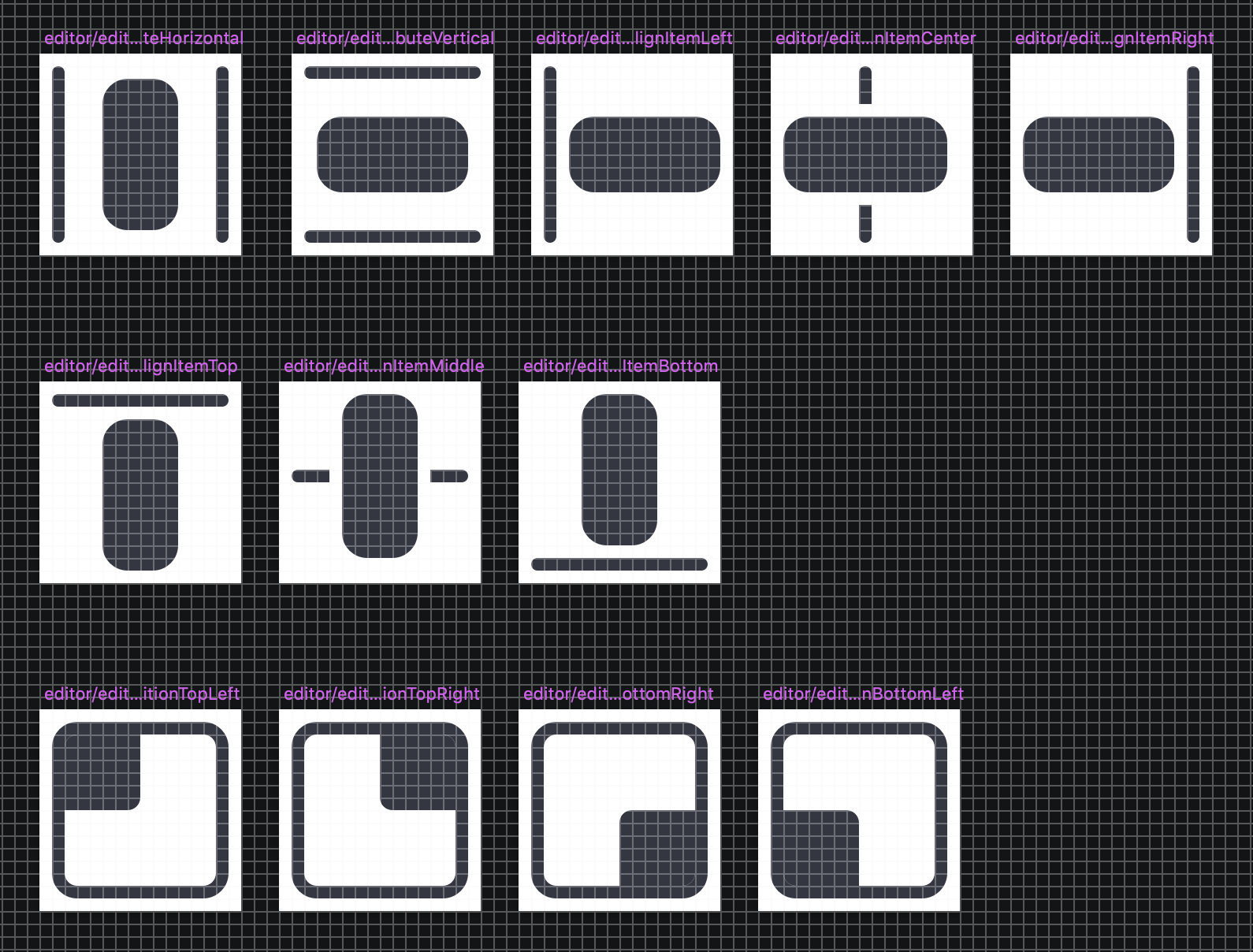 Error handling work has started, a discuss issue has been opened with the expected behaviour in alerting when errors occur (#39349). The development has started on enhancing the task manager (#39829). An email action is about to be merged, which will round out the “built-in” actions for 7.3 - server log, slack, and email (#39517).

Work has started on migrating the task manager to the new platform (#39248).