Get Hosted Elasticsearch on Your AWS bill with Elastic Cloud

As we began working on Elastic Cloud (try it for 14-days if you haven't), we did so based on a simple realization: our users wanted the ability to deploy the Elastic Stack without the requirement of locating and provisioning hardware. They want to spin up Elasticsearch clusters on demand, use Kibana to visualize and understand your data, scale dynamically, enjoy the latest and greatest Elastic Stack and X-Pack versions, and know that our team is there making sure the lights are on.

It’s the Elastic Stack wherever and whenever you want it. And, for today, it is hosted on Amazon.

In the process of supporting Elastic Cloud, we heard some common feedback:

'Amazon already has my credit card number.' Or, sometimes, 'I have to use my Amazon credentials for payment.'

Say heya to Elastic Cloud, the official hosted Elasticsearch service on the AWS Marketplace! Now you can pick between having your bill through Elastic or AWS.

However, not all software can be consumed as AMIs, specifically not software that’s provided as a service. So there was a whole class of applications and services that AWS users couldn’t consume from their AWS account. Among them, Elastic Cloud.

Last November, AWS announced a new marketplace service, called SaaS subscriptions. It enables users to discover and subscribe to a range of SaaS and API products using their AWS account, right from the AWS console. With this marketplace, AWS users can subscribe on the AWS Marketplace and consume each service directly through the seller’s website or API, receiving a single bill showing all their metered usage for all consumed AWS and marketplace services. This, in turn, greatly simplifies the procurement and payment process with a single bill from AWS.

You can pay with with the payment information you already have stored and, perhaps, approved by your corporate procurement team while enjoying the newest releases and the full capabilities of X-Pack including monitoring, alerting, security, Graph, and more.

Given the current constraints of the marketplace, we have taken the breadth of options available to you for deployment and consolidated them to 8 variants based on size and region.

We look forward to your feedback on the process of signing up and provisioning. Get started through the AWS Marketplace now or try Elastic Cloud for 14-days at no cost. 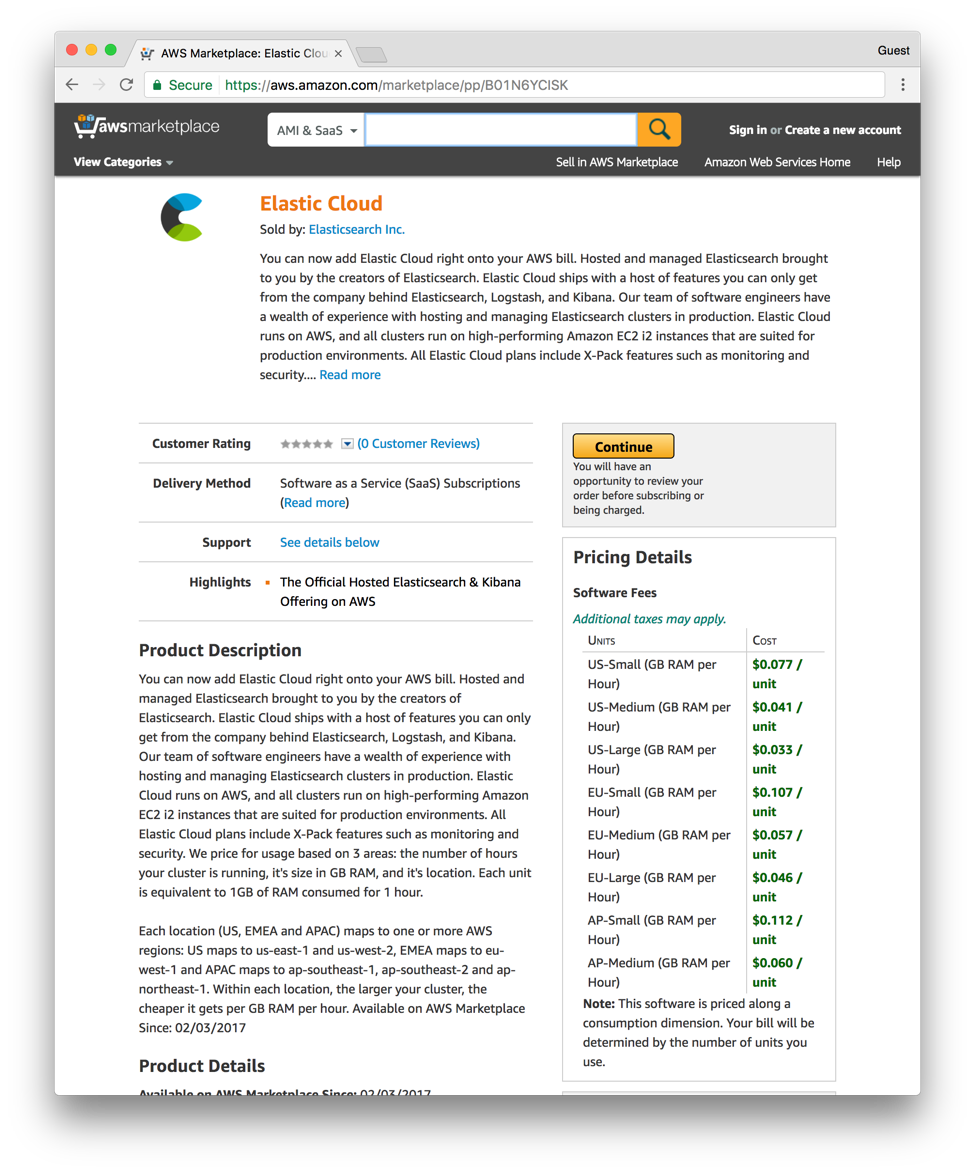