Welcome to Kurrently in Kibana, your source for keeping up with the Kibana project. With information on project releases, work in progress, and learning resources, we hope you'll find this weekly update to be pretty... in-Kred-ible!

Working on a year in review (on @Stripe IRC) blog post, getting to play with some ElasticSearch and Kibana! pic.twitter.com/Hti65UFkgg
— matthewarkin (@matthewarkin) April 16, 2015

In the last episode of Kurrently in Kibana, we shared you all the glorious details about our planning for the 4.2 feature set. Since then, we've been hard at work on the 4.1 release. You can check out the larger scope of everything planned in the GitHub issues list for 4.1, but here's what we've been doing in the past week or so:

This allows you to export and share definitions of searches, visualizations and dashboards. It also lets you edit the raw JSON schema and import the object. (Pull pending)

Add and sort columns from the dashboard. 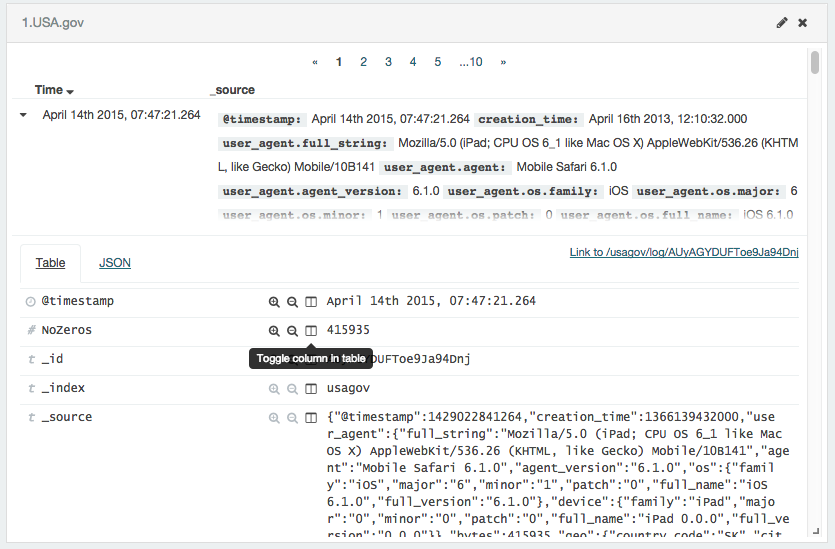 A long time ask, this allows the user to apply transformation functions to the view of a field. For example, setting the precision of a number, or displaying it as bytes. Or taking a string and mapping it to a link. Phase 1 will have pre-defined functions, phase 2 will like be our first foray into a defined plugin structure and will allow users to define their own functions and views for fields. (Pull pending)

We've long been able to display and filter scripted fields. Now you can sort on them too. This means the only place you can't use scripted fields now is in the query bar. (Pull pending)

Added an indication of current time.

Super useful for folks with delayed data, or data that goes “into the future". It draws a faint red line on the chart at “now". This was designed in such a way that we can place multiples of these in arbitrary locations in the future, making them useful chart markers at a later time. (Pull pending)

Snapshot build artifacts are now available for when you're jonesin' for the latest and greatest thing. Get them here.

And MOAR! So much more.

In case you missed it...

No joke! Kibana 4.0.2 was released on April 1, with a number of important bug fixes and small updates to make the Kibana 4 experience even better. Check out our post on this minor release for more information.

After a bit of a hiatus during what we call "The Elastic{ON} Period," we're now back in business with the newest episode in our WILDLY POPULAR Kibana 4 video tutorial series. In this third installment, we share with you how tile maps work in Kibana 4 -- giving you the tips you need to be a geographic-point-association pro! (Sorry if that title is a mouthful. Don't worry, though, you'll be awesome nonetheless.)

Filed under: Pics, Or It Didn't Happen

An anonymous reporter from the Phoenix, Arizona office shares that some of the Kibana team members at Elastic may have been delighted to be assisting in the "renovations" of some sections of the building, taking great pride in hitting stuff with hammers. So never fear, dear readers, it appears to be true: even though it seems like they must never stop, the Kibana team does get away from the desk now and then! :)

See You Next Week!

As you may have seen, we're now publishing weekly updates on Elasticsearch and Apache Lucene, Logstash and Kibana. We'll bring you the latest and greatest in next week's Kurrently in Kibana.

If you're using #Elasticsearch, you should try Kibana. Amazing way to visualise the data in Elasticsearch. http://t.co/FBlGCdMjg2
— Nicolas Widart (@NicolasWidart) April 17, 2015