Jaeger is a popular distributed tracing project hosted by the Cloud Native Computing Foundation (CNCF). In the Elastic APM 7.6.0 release we added support for ingesting Jaeger traces directly into the Elastic Stack.

Elasticsearch has long been a primary storage backend for Jaeger. Due to its fast search capabilities and horizontal scalability, Elasticsearch makes an excellent choice for storing and searching trace data, along with other observability data such as logs, metrics, and uptime data. If Jaeger already supports storing traces in Elasticsearch, what is this new feature all about?

Sending Jaeger traces to the Elastic APM Server brings them into the Elastic Observability solution, which comes with some powerful integrations, including:

How to send Jaeger traces to Elastic APM

In the typical Jaeger architecture, your applications will be instrumented by a Jaeger client, which sends data to a (typically host-local) jaeger-agent, and from there to a centralised jaeger-collector.

We’ll assume that you have already set up Elastic APM. To send your Jaeger traces to Elastic APM, you need to:

Soon you should see traces and errors showing up in the APM app in Kibana, like those from the Hot R.O.D. demo application shown below: 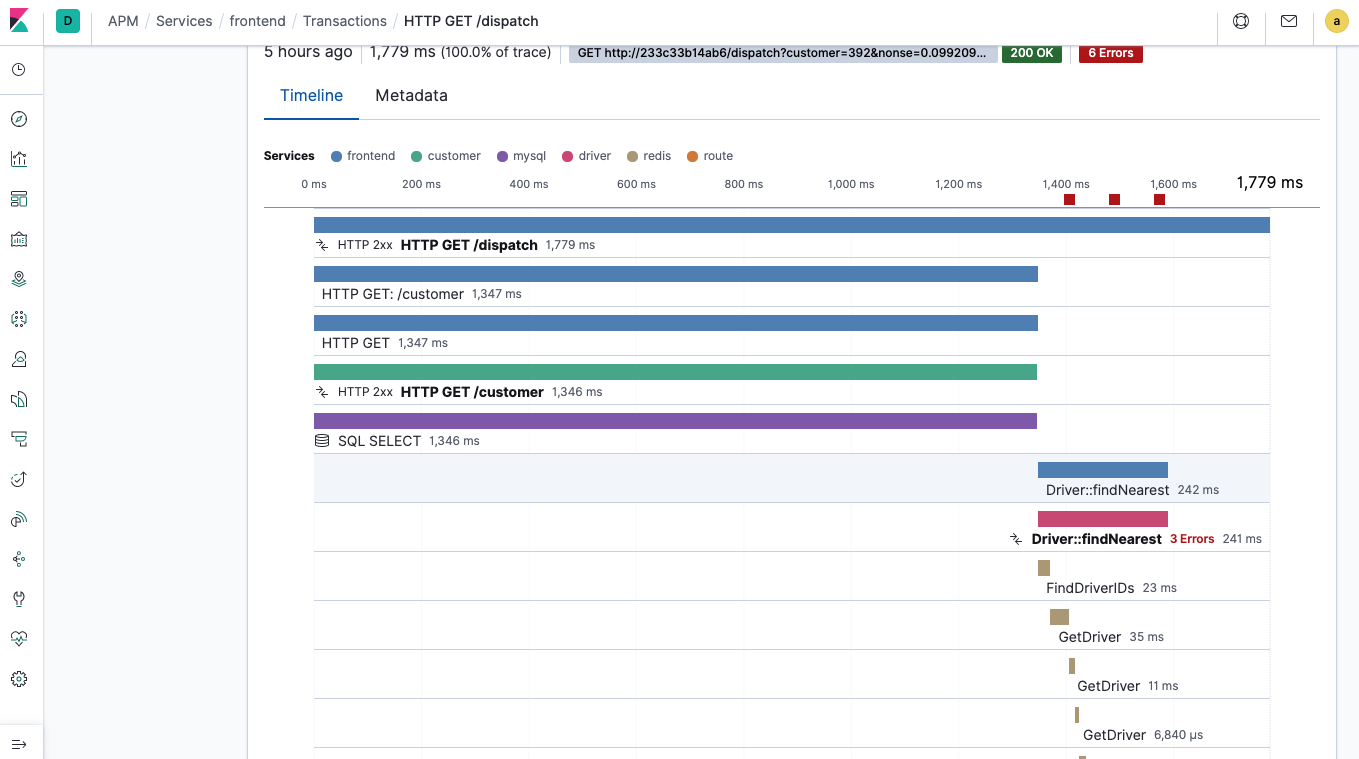 One important thing to bear in mind when configuring Jaeger sampling is that the transaction counts and rates will be scaled down by the configured sampling rate, unlike when using the Elastic APM agents. We are researching options to address this limitation – watch this space.

Jaeger-agent can be configured to use TLS when sending trace data via gRPC, both for server and for client authentication:

Similarly, the Elastic APM Server can be configured to serve requests over TLS, and optionally to require clients to present valid certificates:

By specifying apm-server.ssl.certificate_authorities, clients will be required to present a valid certificate in order to connect and send trace data to the Elastic APM Server.

As an addition or alternative to client certificate auth, we provide an “auth tag” feature that works with the existing secret token and API Key auth methods supported by Elastic APM Server and agents. The way this works is by configuring Elastic APM Server to specify the name of a special “Process tag”, which will be expected to hold the secret token or API Key:

You can then configure jaeger-agent to add the Process tag to all trace data that passes through it. The tag value format is either “Bearer

For example, if you configure API Key auth in Elastic APM Server, then you would add a CLI flag to jaeger-agent like:

The server will require this tag to be present, and verify it before accepting any data from Jaeger. The auth tag will be excluded from documents recorded in Elasticsearch to avoid leaking secrets.

What’s next for Elastic APM and Jaeger?

Most of the pieces of this puzzle are in place now. There remain a few limitations, which will be addressed over time:

If you don’t already have the Elastic Stack set up, try it for free today, and let us know what you think about the Jaeger integration on the Elastic APM forum.