March 30, 2017 Update: Elastic Cloud (hosted Elasticsearch) on AWS can now be added directly your AWS bill through the marketplace. If you are looking for hosted & managed Elasticsearch, you can try Elastic Cloud for 14-days at no cost. For deploying and managing yourself on AWS EC2, this is the right article for you: 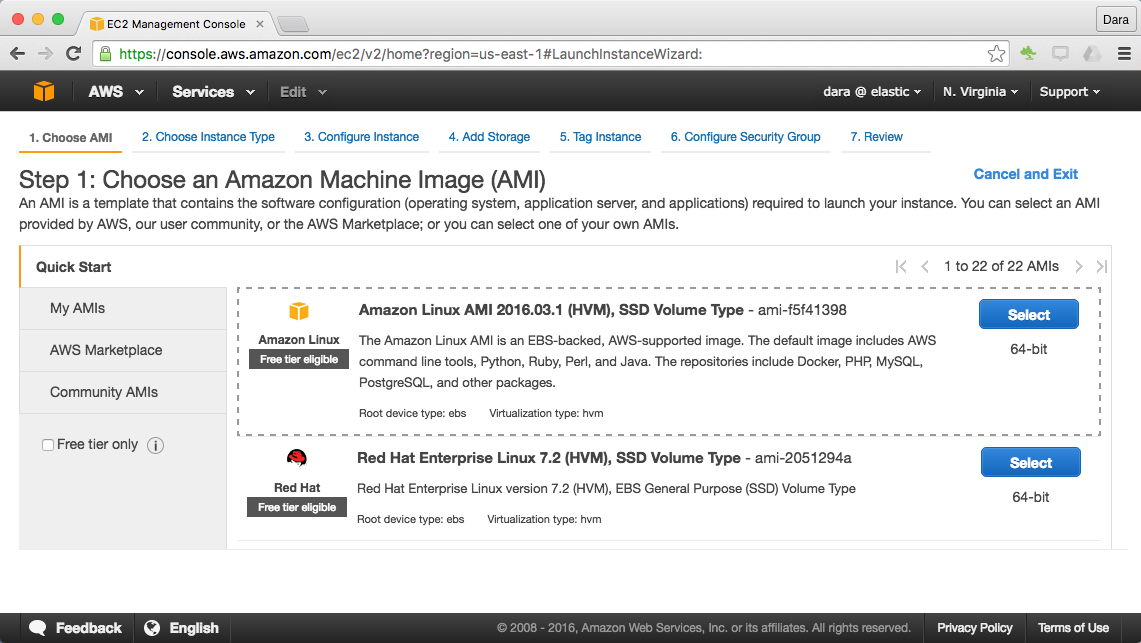 Each Elasticsearch node will run on its own dedicated EC2 instance, so set the number of instances to 3.

Note that any AWS accounts that have been created after December 4, 2013 only support EC2-VPC, so the "Network" option for picking "Launch into EC2-Classic" won't be available for those users and should not be enabled anyway.

Selecting "Enable termination protection" is a good idea as it prevents accidental deletion of nodes and their data.

Leave the default values for remaining fields and click the "Next: Add Storage" button. 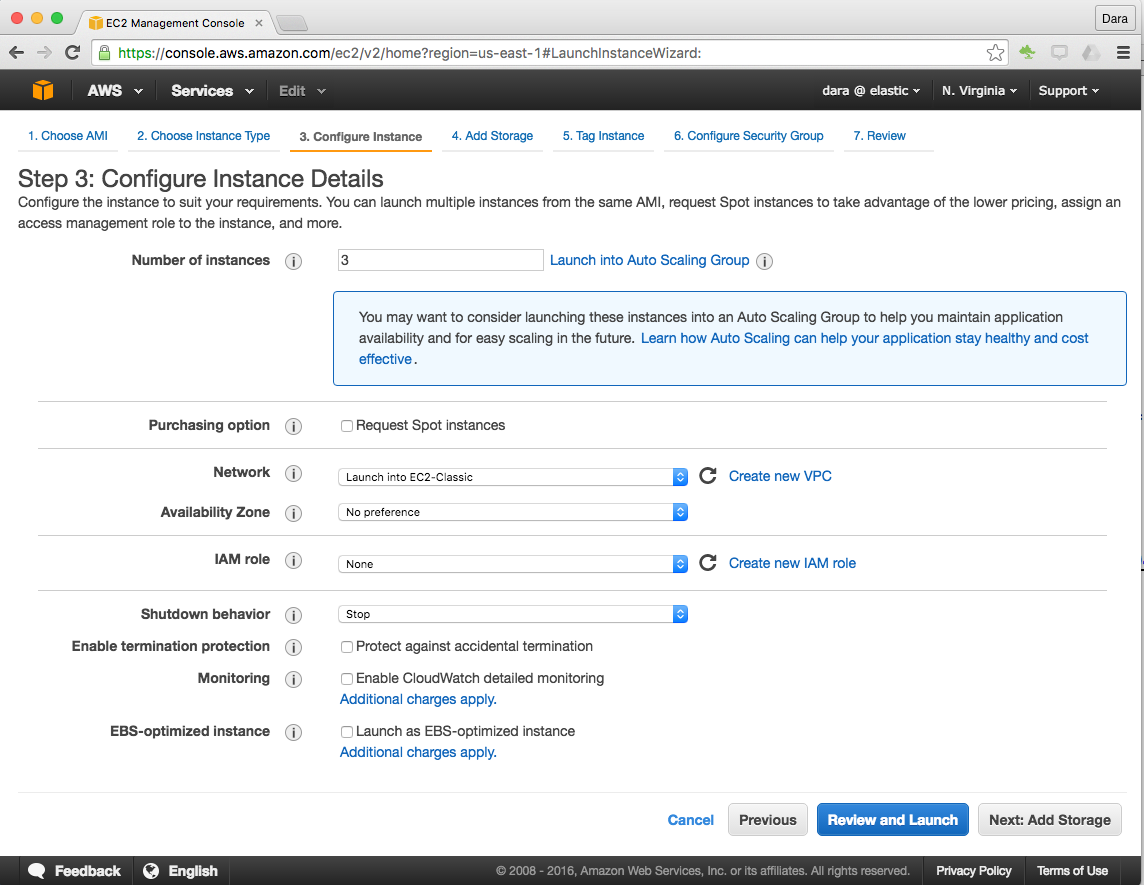 Let's leave the storage Size at 8 GiB. If you happen to know your index storage requirements at this time, you can adjust the storage now. Leave the Volume Type set to General Purpose SSD.

In this field, provide a key and value pair, for example "name" and "esonaws", to make it easy to recall the ec2 instances.

This configuration panel allows you to configure a set of firewall rules for accessing your instance. By default, Elasticsearch exposes TCP port 9200 for REST API access and TCP port 9300 for internal cluster communication. Consider adding rules to allow connecting to TCP port 9200 from desired subnets, typically private subnets, and TCP port 9300 from the subnets where Elasticsearch nodes live. If you plan to change the default port settings in elasticsearch.yml, configure rules for those ports rather than TCP ports 9200 and 9300.

Also, add a rule to allow SSH connections on port 22, so you can connect to the instance in the later steps. 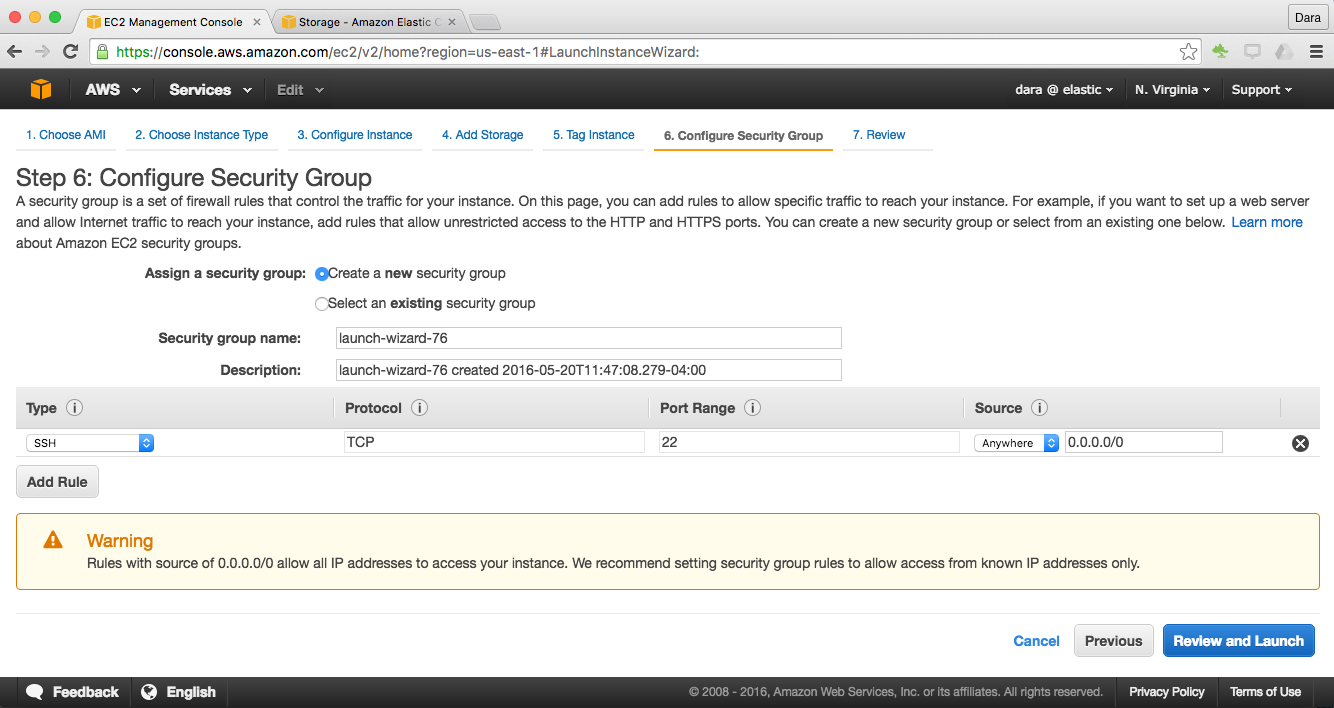 Note any warnings and review the Instance Launch settings and click the "Launch" button when ready. 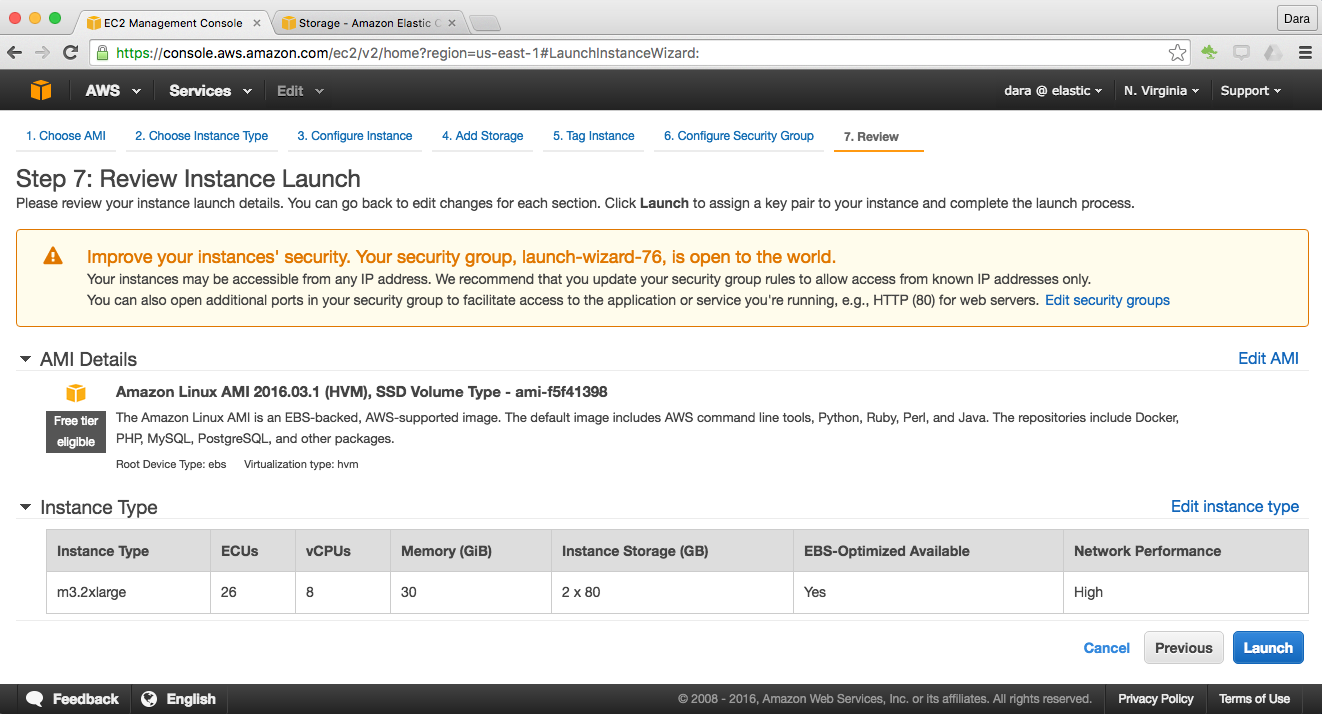 At this point you will be prompted to provide a key pair or create a new key pair. 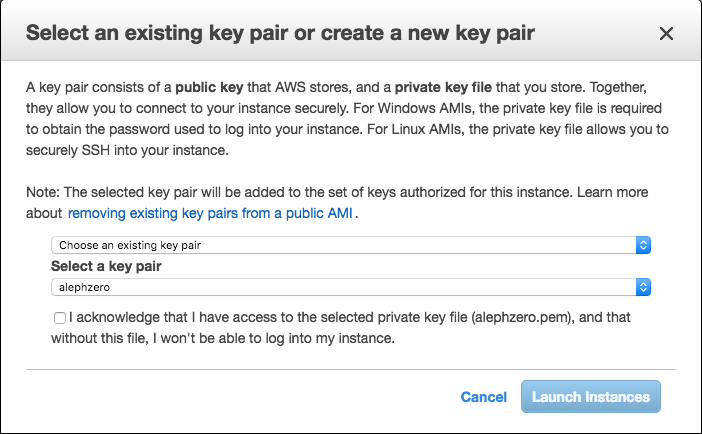 This is necessary to enable SSH access to the EC2 instance. If you need help setting up a key pair the Amazon EC2 Key Pairs article provides an overview and instructions for creating new new key pairs.

Start up the EC2 instances and take note of the assigned private IP addresses which we will use in a following step.

Then install the Elasticsearch RPM package on each EC2 instance as instructed below.

Other versions of Elasticsearch are available here. Refer to the guide if you prefer installing with yum.

Register Elasticsearch as a system service.

You need to install AWS cloud plugin on each EC2 instance in the cluster.

If there are any additional plugins you need, such as Marvel, for monitoring, or ICU, for additional language support, now is a good time to install them.

The maximum JVM heap size should be based upon the machine's memory. Open "/etc/sysconfig/elasticsearch" on each EC2 instance with your favorite editor and set the "ES_HEAP_SIZE" and "MAX_LOCKED_MEMORY" parameters. The following configuration will fit a m3.2xlarge instance. The "ES_HEAP_SIZE" is recommended to be half of the memory but not more than 32GB.

The IP address is not required for a single node cluster. "_site_" and "_local_" represent the private address and the local loopback address "127.0.0.1" and allow access to those from remote.

Starting Up and Verification

If you are setting up multiple Elasticsearch nodes, they must all be the same version, same plugins and equivalent configurations. Start up Elasticsearch on each EC2 instance.

Once sta;d, let's verify the Elasticsearch cluster by using curl to request the cluster state.

If successful, the "status" will be "green" (or "yellow" for a single node). The "number_of_nodes" should be the same number of nodes started. Depending on your index settings, you will need a minimum of two nodes for the cluster "status" to turn "green". A minimum of 3 nodes is recommended to avoid leader election conflicts. If "status" isn't "green" you can also check the Security Group configuration or check logs under "/var/log/elasticsearch" for errors.

Your Elasticsearch cluster is ready!

Deploying an Elasticsearch cluster on Amazon EC2 is relatively easy, but it does require a number of configuration steps, familiarity with SSH, key pair management, and also assumes that you will be managing the machines.

If you prefer the ease-of-use of a managed service, Elastic Cloud, Elastic's official hosted Elasticsearch and Kibana offering on AWS, is a great choice. You can spin up a cluster in just a few clicks. Elastic Cloud also comes with Security, Kibana, supported Plugins, on-demand cluster scaling, automatic version backup and more.

The Elastic Cloud trial is free and doesn't require a credit card. Here's a link to a short video that describes Elastic Cloud in a little more detail.