macOS vs. Windows – What kernels tell you about security events: Part 2

This post continues this two-part blog series on further understanding the differences between macOS and Windows on the system level for effective endpoint security analysis. In Part 1, we covered process events. Here in Part 2, we’ll discuss file and network events. As with Part 1, my hope is to help cybersecurity professionals expand and enrich their experiences on a less familiar platform, ultimately helping them to be better prepared to face differences from past experiences.

Windows file system minifilter driver is probably THE best thing Microsoft has offered so far for third-party kernel developers. It’s the best example of many things, including:

Its programming interface is so friendly and well documented that it’s possible for beginner developers to spend 10% of their time and make it work for 90% of their use cases. But the remaining 10% of cases are the real challenge, and these are often unpredictable due to variance in customer environments. Also, the API is so powerful it can give developers the illusion that they’re able to achieve lots of things, which makes it easy to go down a wrong path with a dead end. Therefore, large companies spend millions of dollars and tons of time on sustaining customers before they become better at the game.

Let’s see what a minifilter driver can offer for developers. The main file operations a minifilter can intercept and control are:

What’s more, for each of the file operations, minifilter allows developers to insert actions into the pre-operation and post-operation stages. This grants developers maximum control on all things about a file in all different phases of its lifetime. Because of that, developers can create their minifilters for many different applications other than file eventing. To learn how to write minifilters, take a look at the Microsoft minifilter samples.

In the new Endpoint Security (ES) framework, file events, just like process events, are a subset of ES events. All ES events can be found in one enum definition es_event_type_t (defined in XCode’s SDK header file /Applications/Xcode.app/Contents/Developer/Platforms/MacOSX.platform/Developer/SDKs/MacOSX.sdk/usr/include/EndpointSecurity/ESTypes.h).

I highlight some of the file events here:

These event types contain AUTH, which means they can be used for inline prevention.

The ES framework typically provides both an AUTH version and a NOTIFY version for the same event. However, exceptions exist, such as:

Compared to Kauth, the ES framework is indeed an improvement in many ways. Aside from being easier to use and easier to debug, we also like the new information that Kauth doesn’t provide, such as actor process information. The macOS ES framework passes the event information to third-party ES extensions through the data structure es_message_t:

For a full list of file event information provided by the ES framework, please refer to structure es_message_t defined in the header file: /Applications/Xcode.app/Contents/Developer/Platforms/MacOSX.platform/Developer/SDKs/MacOS.sdk/usr/include/EndpointSecurity/ESMessage.h

For more hands-on experience, take a look at my colleague Will Yu’s blog post Mac system extensions for threat detection: Part 3 and download his sample code: SimpleEndpoint. Alternatively, you can download a macOS FileMonitor to play around with, and explore its source code.

WFP’s actual internal layering is way more granular than that. Detailed filtering layer information can be found in Microsoft's documentation. WFP can be used to examine, block, or modify network traffic on various layers. It’s a powerful tool to create innovative network applications. To learn how to write WFP drivers or applications, take a look at the Microsoft network samples.

Before macOS Catalina, network kernel extension (NKE) was the only supported way to filter network traffic. I briefly describe it here so that later in the Network Extension section you can see Apple’s evolution on this subject. NKE provides three filter layers:

These filters are not limited to monitoring network events — they also allow developers to modify network events, such as delay and re-inject packets, or redirect packets. Below is a list of the main events they can filter:

Network Extension is a type of system extension that’s meant to replace NKE. Compared to Microsoft WFP, or its Apple predecessor NKE, the new Network Extension framework is incredibly simple:

Developers need to obtain proper entitlements from Apple to be able to use these APIs and develop such applications. 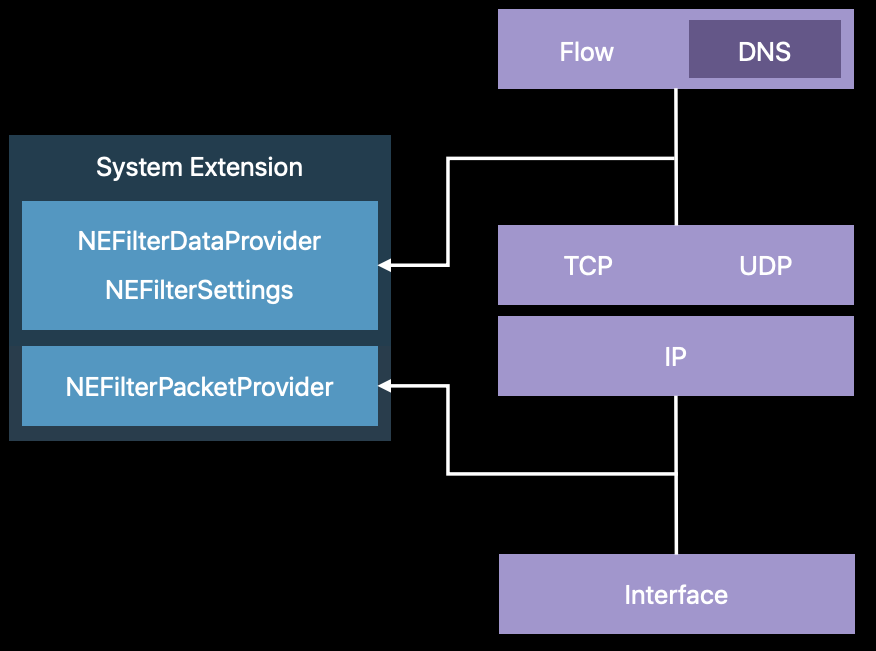 This is an application-oriented layer.

Developers are given read-only access to flows. You can’t modify any aspect of a flow, including any of the flow’s data. The actions you can take on a flow are defined by a verdict —  NEFilterNewFlowVerdict or NEFilterDataVerdict — which you return to NEFilterDataProvider through its overridden methods in your subclass. The main supported actions are:

The metadata it provides is really simple:

These actions are defined by enum type: NEFilterPacketProviderVerdict

In this two-part series, we have compared the two operating systems, macOS and Windows, on how they support the basic operating system events: process events, file events, and network events. We provided detailed information for each of those areas and key differences were summarized. A sample based on the new macOS Network Extension is provided as a supplement to the limited online sample resources for system extensions.

After witnessing the two operating systems’ evolution through the years, I came away with a couple key takeaways. For macOS, I want to echo what we mentioned in the beginning of Part 1: Apple takes lots of things as their own responsibility instead of sharing them with third-party developers. Their new highly wrapped-up APIs reflect only the message they’ve always been sending: focus on what you do best. In other words, mind your own business.

Windows, on the other hand, is going to continue sharing responsibilities with third-party developers by providing strong programming support for them. However, unlike the pre-Windows 10 era, controls have been put in place. Microsoft has put checks on programs and more are coming. I believe one day Windows will be able to disable rogue programs with a mere flip of a switch.

If you want to protect your organization from malicious activity occurring in either environment, Elastic Security integrates leading endpoint protection with Elasticsearch-powered SIEM technology for rapid, scalable defense.