Message queues are used in Logstash deployments to control a surge in events which may lead to slowdown in Elasticsearch or other downstream components. Redis is one of the technologies in use as a message queue. Due to its speed, ease of use, and low resource requirements it is also one of the most popular ways as well.

That is probably why it has been around for a very, very long time—since Logstash version 1.0.4, released more than five years ago!

With all of the recent changes to improve the Logstash pipeline—as well as improvements to the Redis plugin itself—you may not be getting all the performance the Logstash Redis input plugin is capable of delivering.

The test setup included the most recent stable version of Logstash (2.3.4) with Redis 3.0.7 running on the same machine, which is a 2015 MacBook Pro, for reference. The Logstash configuration used is

This test setup is only designed to test for maximum throughput. Actual performance numbers will vary widely depending on what other plugins are used.

By iterating through a few options for only the threads setting, and using all other settings at their defaults, we see results like these:

Let’s run the same tests again, but with batch_count => 250, and add -b 250 to our Logstash command line to take full advantage of that increase: 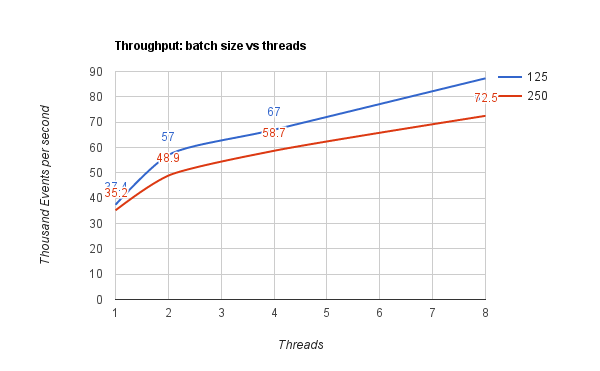 As you can see, increasing the default batch_count (which is 125), to 250 results in a decrease in performance.

It’s been common in the past for users to use a larger batch_count when working with Redis.  This is no longer best practices, and will actually reduce performance.  This is primarily due to changes in the Logstash pipeline architecture. Even an increase of batch_count to 250 results in a drop of performance from 89.5K/sec down to 72.5K/sec when threads => 8. The sweet spot for batch_count is right around 125, which is the default pipeline-batch-size (there’s a reason for that!).

Recent changes to the Redis input include turning on batch mode by default and using a Lua script to execute the batch retrieval commands on the Redis server. Lua scripts also act as a transaction so we can take a batch and shorten the queue in one step. This forces other Redis connections to wait. Note, your Logstash Redis output plugin in the upstream Logstash config is one such connection.

You might want to look at using bigger batch_events sizes e.g. 500 on the upstream Redis output - this will buffer the events before calling Redis and doing this may give the downstream Redis input threads time to jump in to pull from Redis. However, if the event generation rate is high then this may not be as helpful - 50K/sec in batches of 500 means a batch buffer fills in 10 milliseconds.

One more source of variation is JSON encoding (1), decoding (2) and encoding (3) - yes, three times, 1 in the upstream Redis output, 2 in the downstream Redis input and 3 in the elasticsearch output. Events with big string values do take some time to decode so make sure your testing is using data sets that represent the size and distribution of size as close to your production data as you can make it.

Many users seek to improve throughput by starting up multiple Logstash instances on different hardware all pointing to the same Redis server and list.

This does work and can work well, but you are advised to apply the same tuning tips to each instance. There is probably not much point in having multiple Redis inputs defined in any one config unless they are connecting to different Redis servers or a different list. Simply tune the threads of the one Redis input. Clearly, having, say, 3 Logstash instances pointing at the same Redis server will create some degree of Redis client connection contention - meaning that you should probably tune one instance and then retune all three when running together.

In the not too distant future, we will be enhancing the Redis input with a JRuby wrapper around the popular and speedy Jedis Java library.  This will bring the added bonus of supporting Redis Cluster mode!

In the meanwhile, to give your Redis input performance a boost, try increasing the number of threads used. And be sure to measure and tune accordingly if you use something other than the default batch_count, or have multiple instances of Logstash pointing to a single Redis server.

If you have a question about Redis and Logstash, feel free to open a discussion topic on our forum. You can also find us on IRC (#logstash), and on GitHub.