At Elastic we have a simple giving and community-focused program named Elastic Cares. It’s built on the philosophy that giving back and supporting the communities in which we live and work can inspire and enrich our lives in unexpected ways, while giving Elasticians agency to be the change they want to see in the world. The foundations of this program are simple:

Two of our most memorable Elastic sponsored giving opportunities and achievements were our Trans Human Rights and Breast Cancer Awareness campaigns. In honor of International Women's Day (#IWD2019), we want to give the two Elasticians who championed these efforts an opportunity to share their stories with you.

When I’ve donated or been part of causes via our Elastic Cares program in the past, I’ve thought about them as ways to exhibit care for strangers who are facing challenges that I’ve largely gotten to evade. Everything is different, though, when the problem is personal, and so today I’m here to write about a single multiplicative effect: my own. Bear with me: we have to travel back in time, to September of last year, to tell this story.

I was headed to our Support Summit in Austin – a meeting for all of our support engineers which I usually attend as a representative of our field teams. Like many others, I was working hard to get ready for our IPO. Just before arriving in Austin, I got a phone call from my mother, who lives in Texas. The purpose of the call was more or less to the effect of: you should probably extend your trip. She had a tumor, she said. Together, we went to visit an oncologist, and learned that it wasn’t just the one tumor, but several. My team was nothing but supportive as we went from specialist to specialist to get chemo underway, even as, in the background, Elastic got ready to go public. Navigating a new diagnosis like this is scary; it presents myriad challenges and complexities, and by its very definition it invites uncertainty. Every doctor certainly hopes that every treatment will be life-saving, but that’s not always the case.

Again this all happened in mid-September, and as October happened to be Breast Cancer Awareness Month, I worked with Elastic Cares to hand-pick the Dr. Susan Love Research Foundation, the Lynn Sage Cancer Research Foundation, and Metavivor as organizations to benefit from the giving campaign I was creating. But Elastic went above and beyond, offering a 200% match for any Elastician donating to any breast cancer research organization, not just the ones I had selected.

Breast Cancer is a disease that uniquely impacts women; something like one in eight American women are diagnosed in their lifetimes, and I saw its network effect when folks from all over the company reached out to me to share their own stories: sisters, wives, cousins, friends, and mothers who’d come through breast cancer diagnoses and seen their way to the other side.

I’ve shared before about the ways Elastic encourages us to work with non-profit organizations, championing causes that are near and dear to us, but this time, this was personal in a way none of my previous efforts have been. 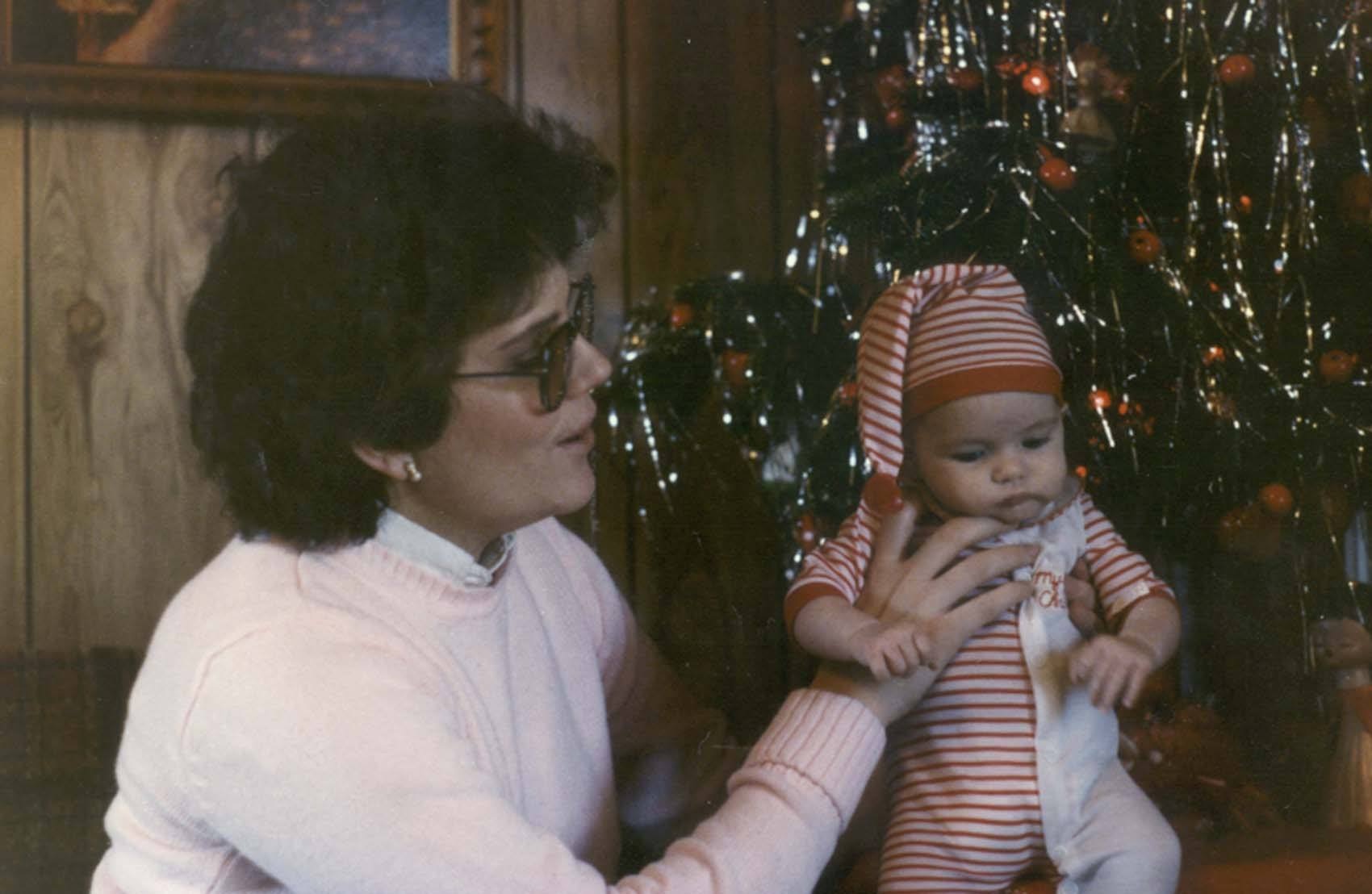 There's no way my mother could have known in the 80s that this pink sweater would be featured in a blog post about breast cancer ... or DID SHE?

When you do something like creating a campaign for a cause, pragmatism tells you to make your goals small. If you raise a few hundred dollars or maybe a thousand, it will mean that maybe a couple dozen colleagues dropped twenty bucks into the non-profit tip jar you’ve created.

Together we raised nearly $11,000, and that money will make a future without this disease possible.

Five days into October, and at the start of our Breast Cancer campaign, I was in Manhattan standing on the floor of the NYSE to watch our CEO, Shay, and our leadership team, ring-ze-bell. The markets have been the centerpiece of my mother’s career in financial services for the last twenty years, and so perhaps, more than anyone else in our family, she understood the significance of that moment. While on the floor, I busily texted my parents updates and pictures as our company went public. In those early days of our cancer journey together as a family, this achievement was powerful: it was a wonderful thing amidst a frightening new normal, something that momentarily parted the clouds of fear and worry. As I’m writing this now, my mom is wrapping up her course of treatment, and in a few months, it’s highly likely that she’ll get to experience something that just a couple decades ago was unthinkable: what “life after cancer” is like. 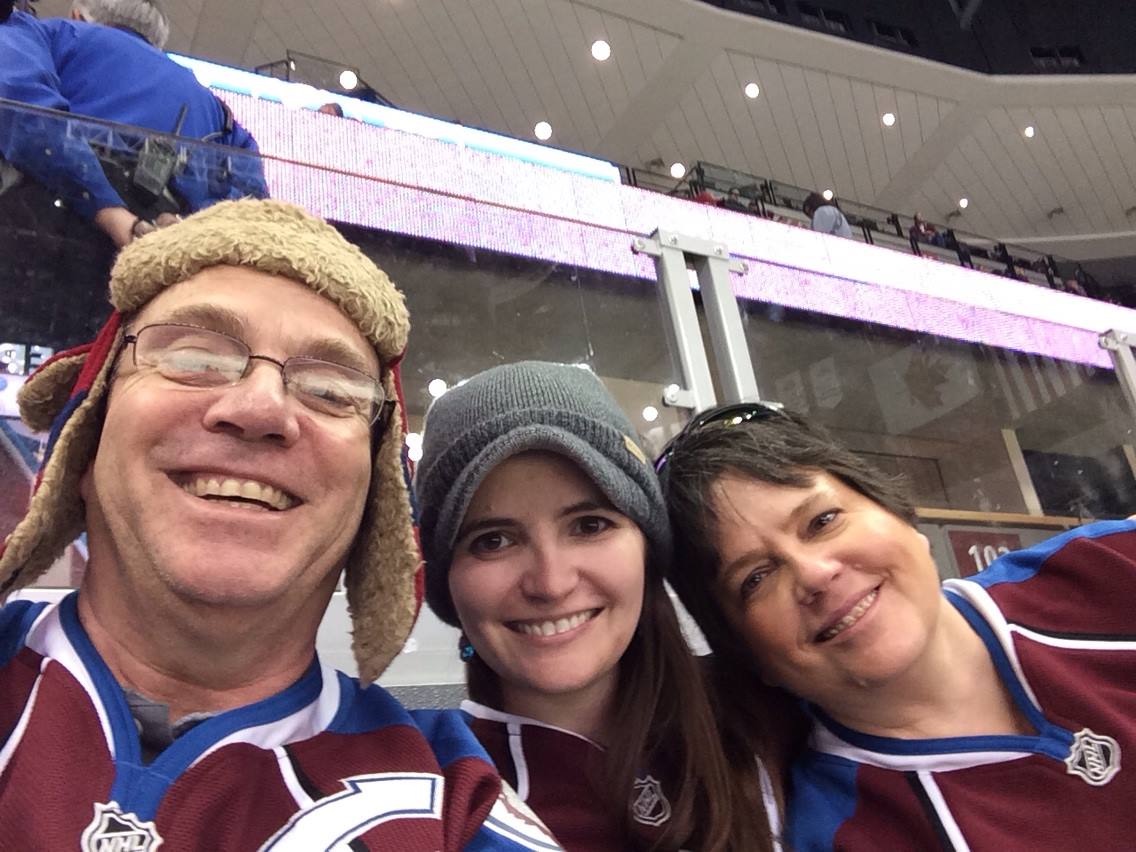 The Frost family: every hockey team has a captain, a forward, and a goalie.

I’m not going to say “with luck, so will so many others.” Because advancing a cause like this isn’t about luck. It’s about the incredible talents of doctors who battle these diseases side-by-side with their patients. It’s about the technology innovations being brought within the healthcare industry – disrupting cancer with the right medication, for the right patient.

It’s about investments that help these organizations find better and better treatments, tools, and medications that will keep our mothers, sisters, and friends around for even longer — to be the strong women we know, the ones who raise us, and the ones who inspire us.

It’s about the dozens of Elasticians who made a decision in October to make this campaign part of their day and not just a day about the work that was in front of them. It’s about a company that not only allows, but encourages us to raise our hands and say “here’s something I care about” and “let’s be generous together.”

It’s a well-documented phenomenon that if you work in technology and you’re a member of a minority group, you have a higher likelihood of going unseen and unheard at your organization. At a distributed company, it’s easy to accidentally make the problem worse: turning your video off in a Zoom meeting and staying on mute is simple when your apartment is a mess, your hair is worse, and it’s all just too much. Hiding is easy, but fuels loneliness – making it easy for anxiety, depression, and Imposter Syndrome burn through your head. It‘s part of why the inclusion part of Diversity & Inclusion is so important: you can feel as alone and unseen in a crowded room as you can in an empty home office.

It’s also a lot like being in the closet. 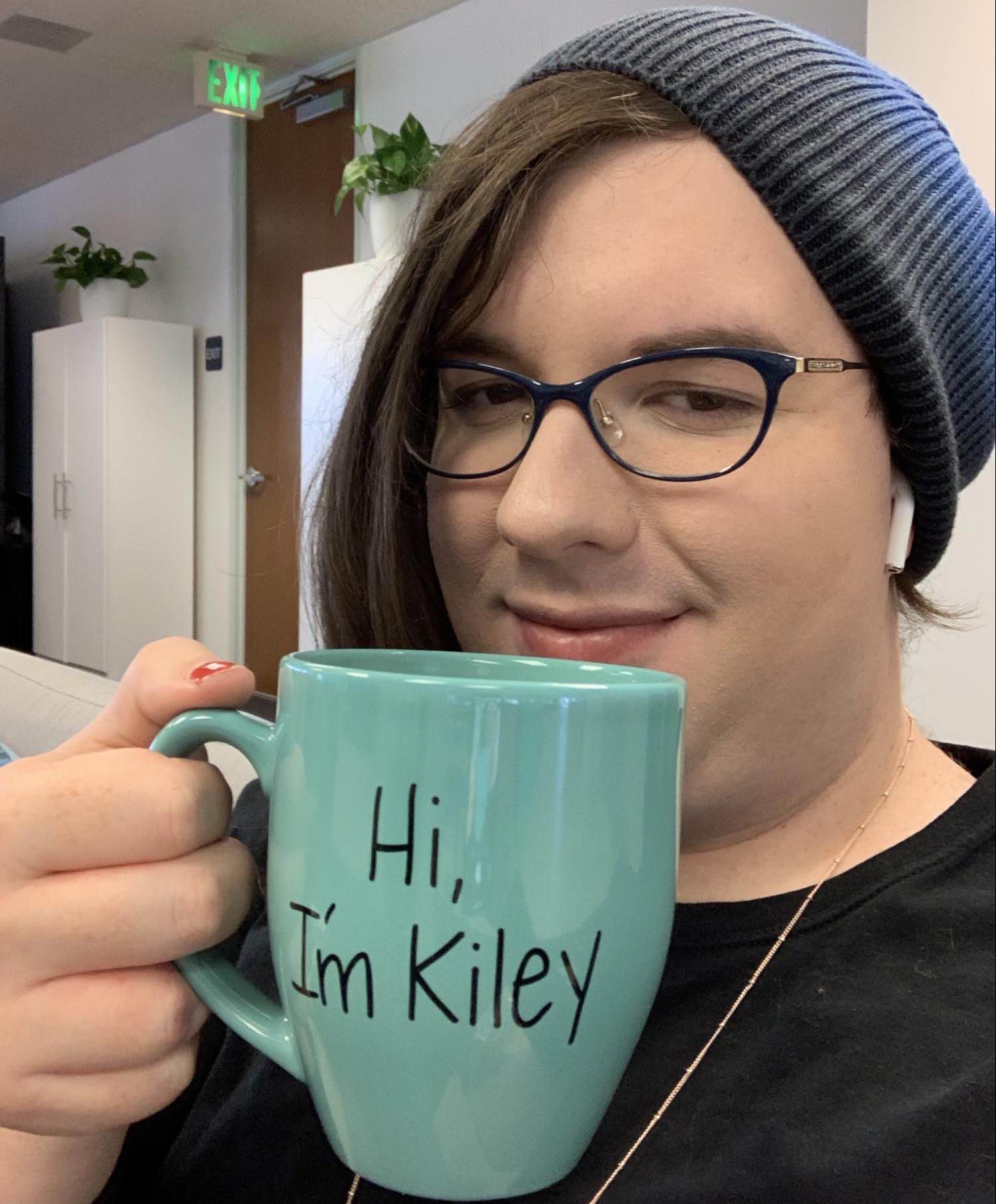 I came out at work, and all I got was a sense of belonging and this mug from HR (...based on my coming out letter).

Keeping that in mind, let’s back up to late October 2018. The Transgender day of Remembrance was just around the corner, in November. TDoR is often overlooked, but held extra significance that year as I had just started the process of transition three months prior. I was still largely in the closet then: besides my amazing wife and a few close friends, only one or two people in Elastic’s fantastic HR department knew I was transgender myself as we worked to sort out some insurance questions.

It felt safer to be go unseen at work, to leave the metaphorical video off. The idea of coming out (or being outed) filled me with dread even as I craved it. Loneliness consumed me, even as I smiled at coworkers in meetings, sat next to them at conferences, or shared a drink when they were in town.

It’s a vulnerable, intimidating place familiar to any LGBTQ+ person. As a transwoman, it can be especially poisonous: not only are you uncomfortable with the gender everyone sees you as, but you don’t have access to the traditional support networks available to other women, which just reinforces all the dysphoria and doubt swirling around in your head. You’re doubly invisible – out of balance – and it eats at your soul.

In this context, the New York Times’ publication of a leaked Trump Administration memo arguing to "essentially eradicate federal recognition” of transgender Americans was utterly terrifying. All my trans and non-binary siblings were under attack and I had barely come out to myself, much less the world. I felt like I had no one to turn to, and that there was nothing I could do. Even talking about the issue on Elastic’s #dibs (diversity, inclusion, and belonging) Slack channel was scary – what if people put two and two together and figured it out?

Still, the success other colleagues had with their Elastic Cares campaigns stirred my hope. Elastic had proven itself to be astoundingly generous and committed to inclusivity. Maybe they’d care about this too?

I sent a message to Kristina Paiz, our Elastic Cares Program Manager: “How would we go about doing a matching thing for trans rights causes?” Within the week we had a campaign supporting four amazing transgender advocacy non-profits in the US (the Transgender Law Center, Trans Lifeline, Freedom for All Americans, and Lambda Legal). Elastic offered 200% matching, and we set a modest goal of $5,000. Our CEO emailed the entire company Friday, October 26, 2018, to launch the campaign, and I crossed my fingers hoping we’d get at least half way.

By Monday we’d raised 130% our original goal. By the end of the campaign, three weeks later, we’d raised just over $20,000. I was blown away. I felt seen. I even felt a little safer. 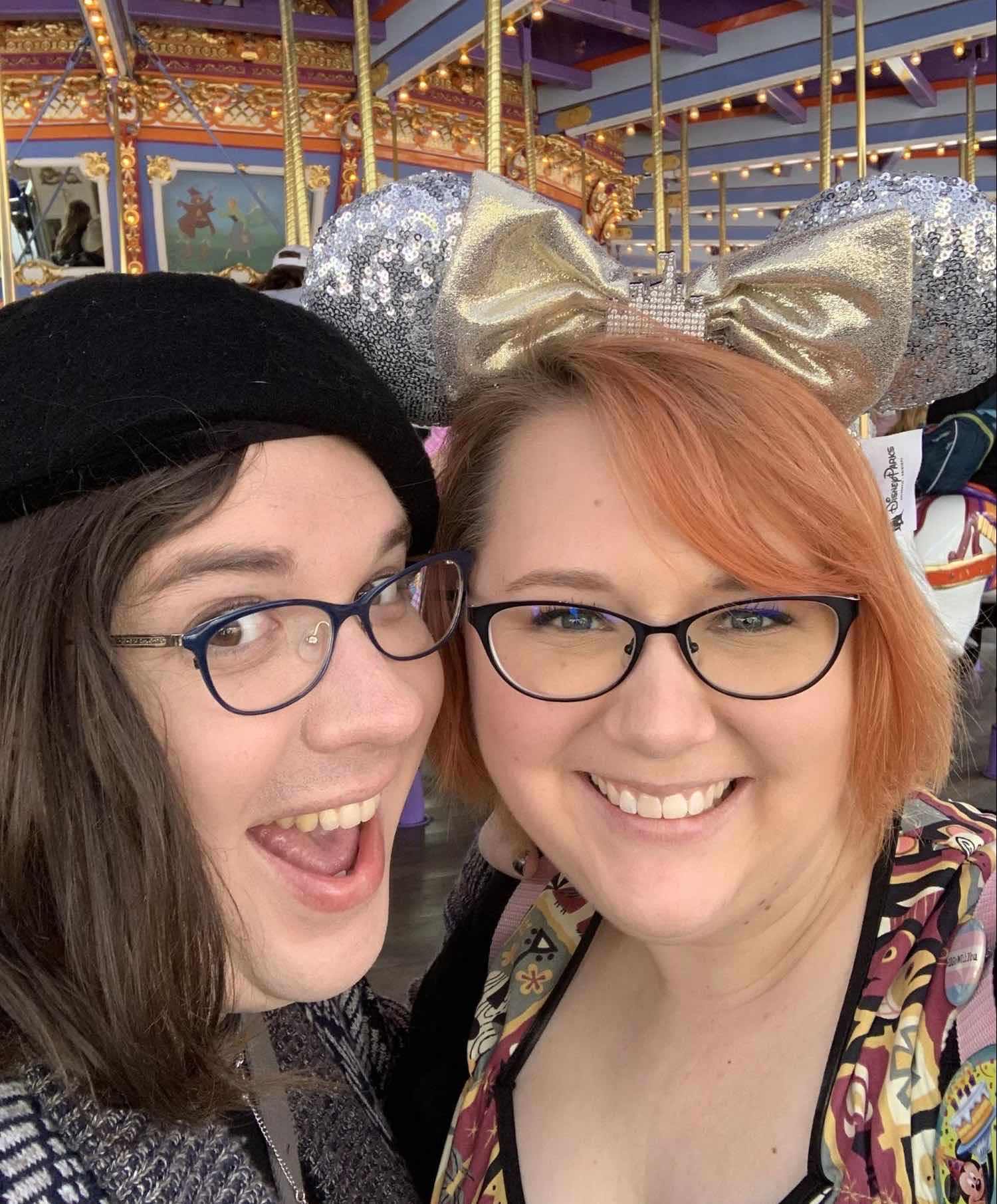 Disneyland is better with fabulous wives.

The essayist Rebecca Solnit has observed that “Hope is not a lottery ticket you can sit on the sofa and clutch... Hope should shove you out the door.” Seeing the urgency of other Elasticians to meet a need, even one that didn’t affect them personally, was the shove I needed. Within two weeks I had done all the work to file for my legal name and gender change, come out to a number of Elasticians so I had support, and began eagerly waiting for my chosen coming out date at work.

That whole process and experience is a blog post or two by itself, but it went amazingly well. My coming out email received so many replies it crashed my phone’s email client, twice. It’s an immeasurable, lucky privilege to work at a company like Elastic, where queer identities are welcome, and every woman is supported and taken seriously. Such balance is rare, and we can’t stop until it’s not lucky but common.

Check out Our Source Code to learn more about who we at Elastic are.