Elastic's Diane Tetrault on what parenting, scuba diving, and product marketing have in common 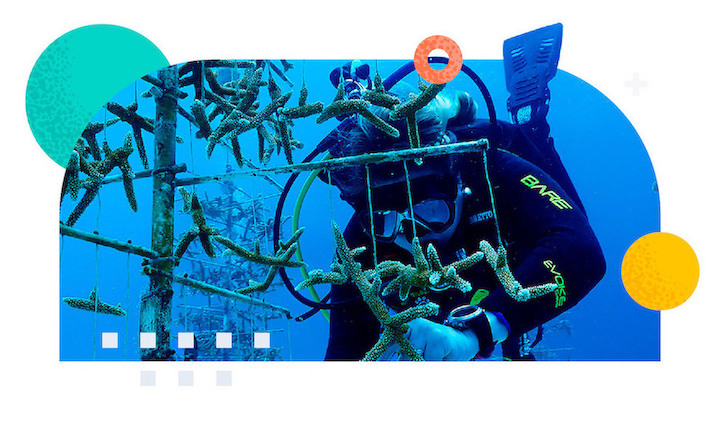 As an instructor of other scuba diving instructors, Diane Tetrault knows how to convey life-saving lessons in a way that encourages and supports her students. And as it turns out, that skill is highly transferable to two other key roles in her life: manager and mother.

Diane is the Senior Director of Product Marketing at Elastic and is also a mom of two sons. In the water, at work, and with her family, she’s gotten plenty of practice creating the right environment for other people to learn and enjoy.

“Scuba diving is something lots of people have on their bucket list, where they say, ‘Oh, I wish I could do that, but I’m too afraid.’ But I know lots of people would love it if they tried.”

Diane’s not one to shy away from new experiences, even when it seems like they’d be hard to work into her packed life. As a working mom, for example, she still makes time to travel and dive, this time bringing her kids along with her and giving them a taste for the adventure that she and her husband so love. Her eldest son, now 8, had visited 11 countries by the time he was 14 months old!

We sat down with Diane to learn more about how she balances her passions, her career, and her family, including how her role at Elastic makes all of that possible.

An Intersection of Interests

“There's probably not a product marketer alive who woke up one day and said, ‘I'm gonna be a product marketer when I grow up,’” says Diane about how she got into her role. “It’s rare that I meet someone who doesn’t have a curvy, wavy road into product marketing—and I think that’s a good thing.”

Her own role looks like this: she got a programming job right after university and immediately realized the heads-down work with little to no human involvement wasn’t for her.

She moved into technical project management, where she got to interact with customers and still deal with engineering topics. Diane stayed in that role until she was promoted into product management, where her work shifted from outward-focused to more inwards, figuring out what her company wanted to build and what it should look like.

But her sense of adventure pushed her to live abroad, so she decided to move to England. Her company didn’t have a product management job open there, but wanted to keep her as part of the team, so they offered her a role backfilling a marketing director who was out on maternity leave. Diane stepped up into a completely new field, picking up demand generation across events, PR, and advertising. She ended up building a life in England and staying for seven years before returning to her home country of Canada.

“Once I had experience in product, experience in marketing, and experience in sales—because I had sales people reporting to me and I spent a lot of time in the field—I understood that there was something we needed to do in the middle,” says Diane.

She leans on three key skills in her current role, and suggests that anyone else interested in product marketing work to develop the same ones:

When Diane had her first face-to-face exposure to Elastic, she had already heard of them years before. Her current company was trying to compete with Elasticsearch, so they sent Diane to attend Elasticon in San Francisco in 2018.

“I was just blown away by the culture—and particularly by the women of Elastic,” says Diane, who went to a breakfast hosted by the ERG and was shocked to see the company’s CEO there, fully engaged and listening. “He wasn’t presenting, but he wasn’t playing on his phone, either. He was nodding away, really engaged in everything. I was really amazed by the fact that it didn’t seem like lip service. It seemed like the company really did value diversity and inclusion.”

Experiencing the Elastic environment made Diane want to work for them. And that’s what still motivates her the most. “I came for the culture, and I stayed for the culture,” she says. “When I interview people, I’m always looking for cultural fit. We’re fiercely protective of our culture, because that’s what makes people stay.”

Here are Diane’s favorite ways that Elastic’s culture manifests itself:

Building Towards the Future

Just this year, for instance, she and her husband pulled their kids out of school for a week to hike in the Canadian Rockies. “We told them they had to learn something new every day, and they learned tons, like about climate change and its first-hand effects,” she says. “Seeing new things gives us perspective. There’s lots of different ways to look at things.”

Diane hopes that people who are looking to build careers in product marketing share that approach. “Be open to different things. Product marketing is a windy road, and you have to create the opportunity. I’m always looking for people who have a hunger for learning, because no one will have everything. The ability to learn and adapt and be open to new things helps you with everything else.”