The end-goal of CSP is to get rid of all usages of `unsafe-eval`. To aide in this effort, we’d like to ensure that we don’t continue to add usages of unsafe-eval. We began exploring the feasibility of the approach outlined in #36311 to protect against this.

Security concerns for the proxy plugin have been figured out for the initial release and we will be requiring mutual TLS certificates between Kibana nodes in order to properly join a cluster. The first PR for this has been merged (#38844) to add configuration options for the SSL cert. Todd is now finishing up testing of this mechanism before review.

This week in elastic-charts, we removed the dependency on EUI components from the library and are now only using EUI styles.  We also released Histogram Mode, which allows a user to specify a prop on a BarSeries (enableHistogramMode) which will correctly align the ticks and other chart elements to view the bar series as a histogram.  We’ve also released fixes for several issues, including that now the chart resizer will only debounce the resize event after the chart has been initially rendered.

This week we merged in the first version of an essential part of the targeted editing experience: Support for dragging and dropping fields to create charts with minimal effort. Currently we are working on data tables as a second chart type besides line/bar/area and are optimizing the dimension editors. As a part of our planning week we defined the targeted scope for our initial beta launch which includes the most important aggregations and four different chart types.

Basic support of Elasticsearch datatype date_nanos was added recently to Kibana, with the merge of #38023 and #38735, by enabling the context view last week, this datatype is now fully supported (There’s one limitation: you can currently search for timeranges only in milliseconds precision).

This week we completed a POC for using embeddables in Canvas using the new embeddables API. This POC creates a plug-in with a hello world demo that will allow the Canvas team to experiment with interacting with embeddables inside Canvas. https://github.com/crob611/canvas_embeddable

There is also a Marvel app regarding this, which you are free to review and comment on.  https://marvelapp.com/c0a4aa1/screen/57857927

We have been working with the Docs team to add a ton of additional Canvas documentation with more examples and definitions for functions in Canvas.

Let me tell you a story

We created an example of how to convert an existing JS component. See #38850 converting the Canvas Shape Picker and related components to Typescript and added Storybook stories.

In addition, this PR adds `svg` import understanding to Webpack and Typescript, and continues the convention of renaming `mini` to `popover`.

EUI updated to 11.3.2 in Kibana. Lots of new snippets added to docs

The EUI updates in Kibana are getting a little more difficult mostly due to making the proper test changes in Kibana to pass CI. We’re trying to get better about keeping Kibana and EUI master within a week of each other but between typescrip and the simple matter that EUI is almost everywhere in Kibana these days, these updates are getting more involved. This latest update brings into play the new color picker along with a few dozen bug fixes, TS conversions and quality of life features.

We’ve also been trying to get better about providing lighter “snippets” documentation to EUI. In the polling we did a couple months ago we were surprised that they were so popular and are trying to follow through to provide snippets for all components. This week the entirity of the Layouts section got snippets and more are coming soon. 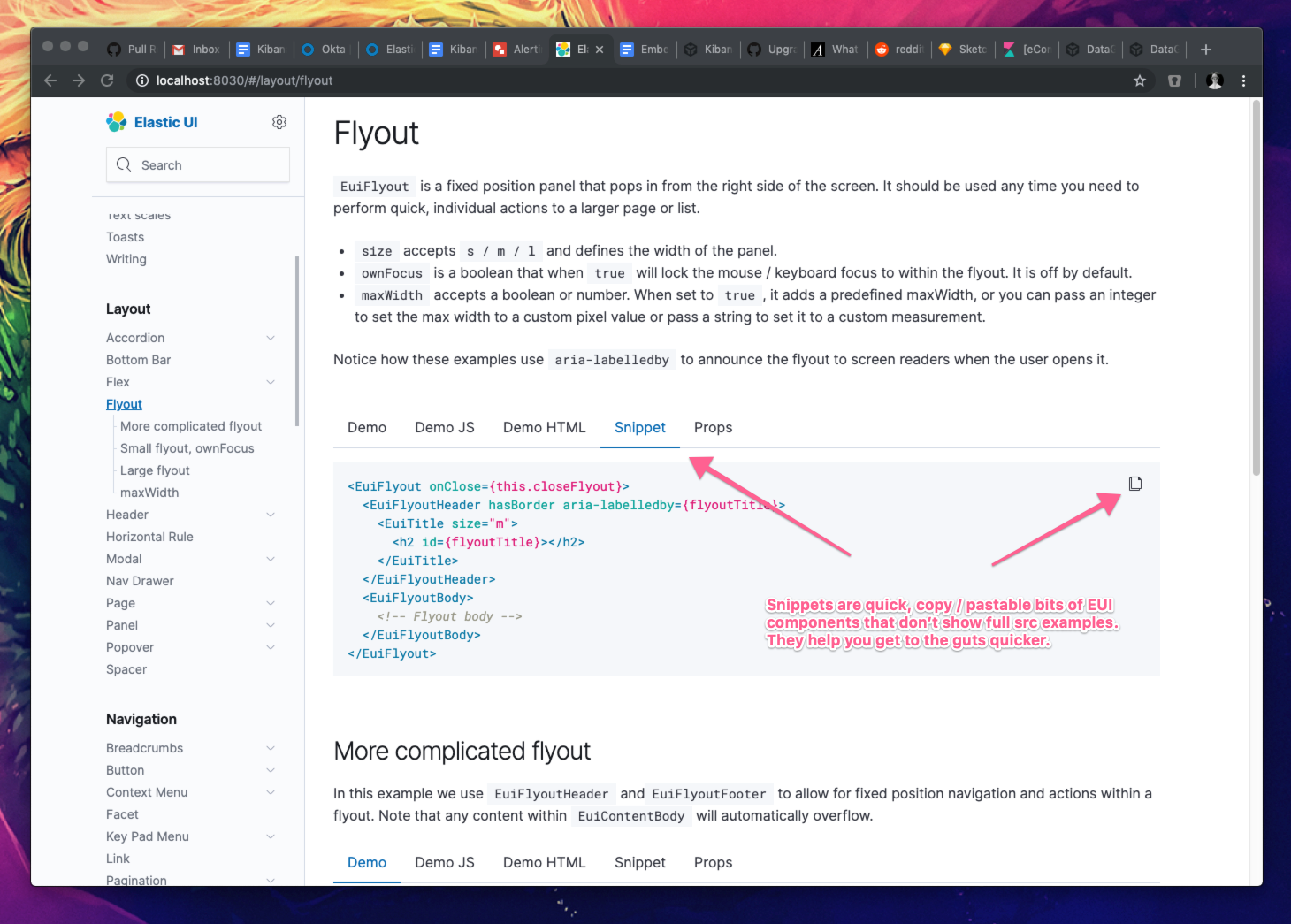 Elastic Charts and EUI now have a more stable relationship

We worked with the Elastic Charts team to help separate the EUI layer so we didn’t have a circular dependency nightmare when they were both added to Kibana. Now EUI’s Sass invisibles layer (the variables, mixins and functions we use to build EUI) are imported as a dev dependency, but Charts now outputs it’s own dist css and uses components that can live independently. This gives us the benefits of updating core globals (like colors or shadows) in EUI, but won’t let the actual CSS potentially fight with whatever is in Kibana’s latest installed version of EUI. Out next stage is now building out some proper example and guideline docs into EUI about Elastic Charts usage.