Growing at the Roots | Welcoming the New Elastic Amsterdam Office

“I remember the days of a handful of people in an office,” shares Sejal Korenromp, senior director of regional marketing (who joined Elastic back in 2013). “As we've grown through the years, what's been unique and so special is our ability to keep the culture and small office feel.”

Though our company is distributed by intention, we have offices around the world where Elasticians can choose to work. We opened our original, small and friendly Amsterdam office in February of 2012 in the Schinkelbuurt. 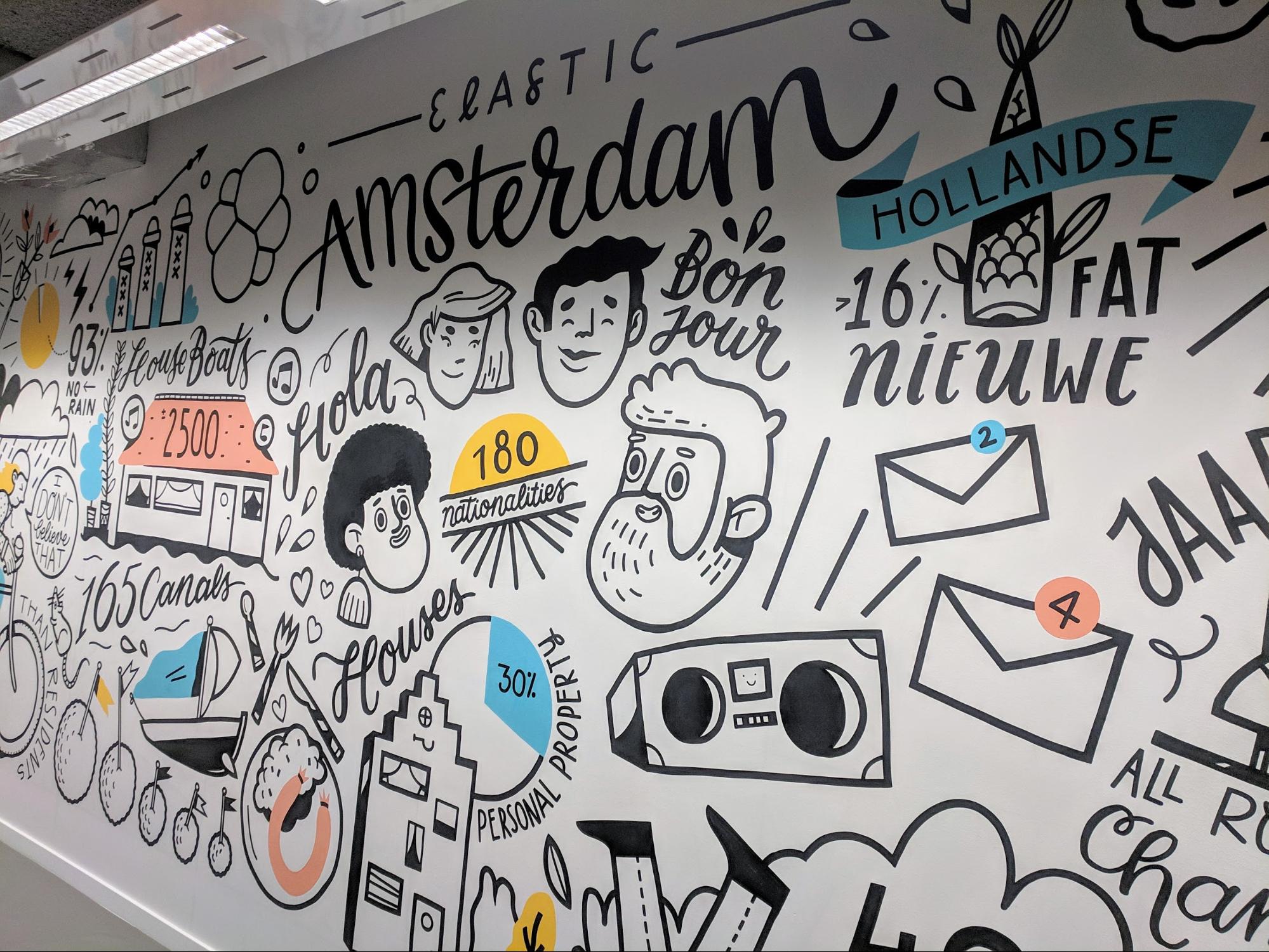 A colorful wall at the new space highlighting the best of Amsterdam's international culture.

One name change, six years and several product releases later, Elastic IPO’d last October on the NYSE. With our company growing rapidly, the Amsterdam team had long ago used every nook and cranny of that small office in the Schinkelbuurt — you could say it felt rather cosy. So, in January, 2019, we announced that a new Elastic office would open in city centre in the 5 Keizers Building on the Keizersgracht and invited the Amsterdam Elasticsearch community to come celebrate.

We were inspired to give back to the Amsterdam startup community as part of the opening. We teamed up with StartupDelta to host 10 Dutch startups that are following a similar path as ours. Startups that joined us included EclectiqiQ, Harver, Cybersprint, Expivi, Unchain, Wizenoze, Sendcloud, Keplar Vision Technologies, Mapiq, and Circularise. Elastic founders Shay Banon, Steven Schuurman, Uri Boness, and Simon Willnauer were on hand to talk about why they founded the company as well as some of the good, the bad, and the ugly of being a start up, and fielded questions in a live AMA. 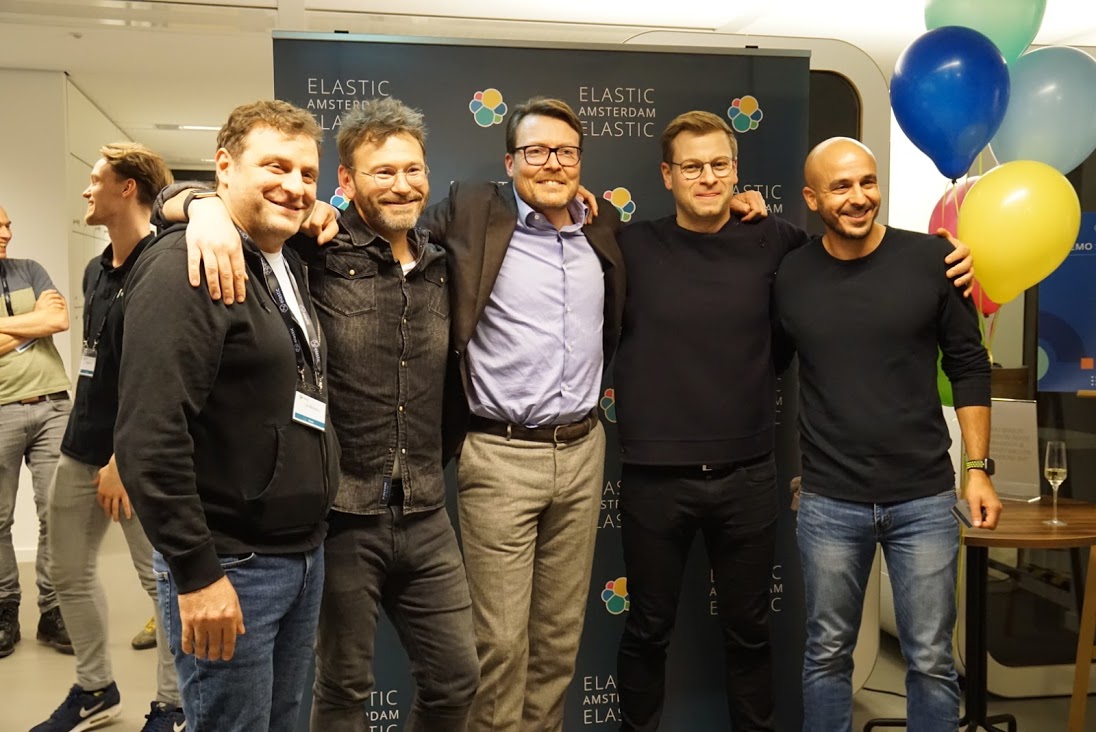 We were also fortunate to have Constantijn van Oranje, Prince of the Netherlands, as special envoy of StartupDelta join us in the conversation and cut the ceremonial ribbon to open the new Amsterdam office. 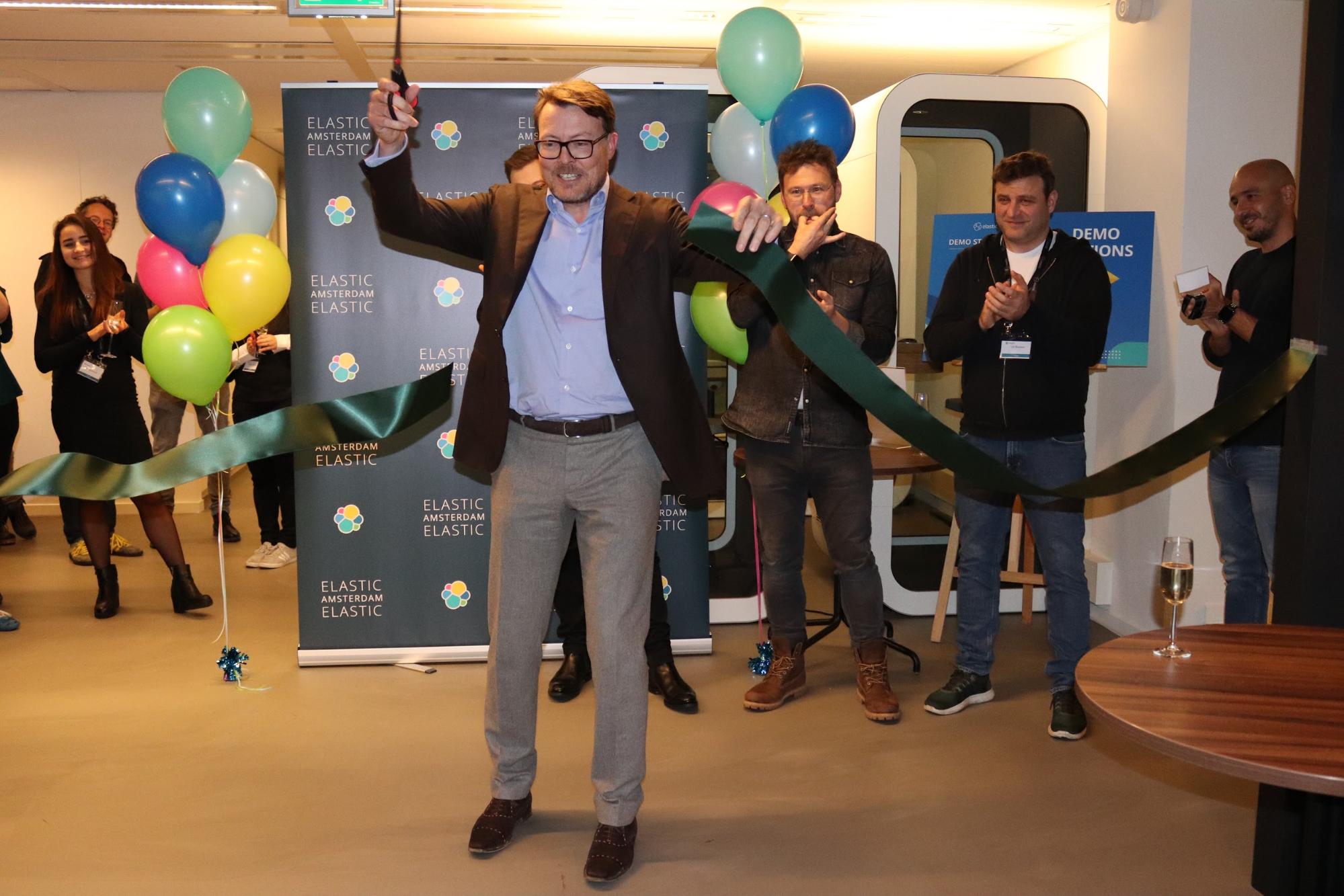 Constantijn van Oranje, the Prince of the Netherlands, cuts the ribbon at the new office.

After the official ribbon cutting, attendees were encouraged to visit demo stations set up around the office to see our products in real time and have the opportunity to speak to our Elastic engineers. An employee party followed with music, food, and drink. 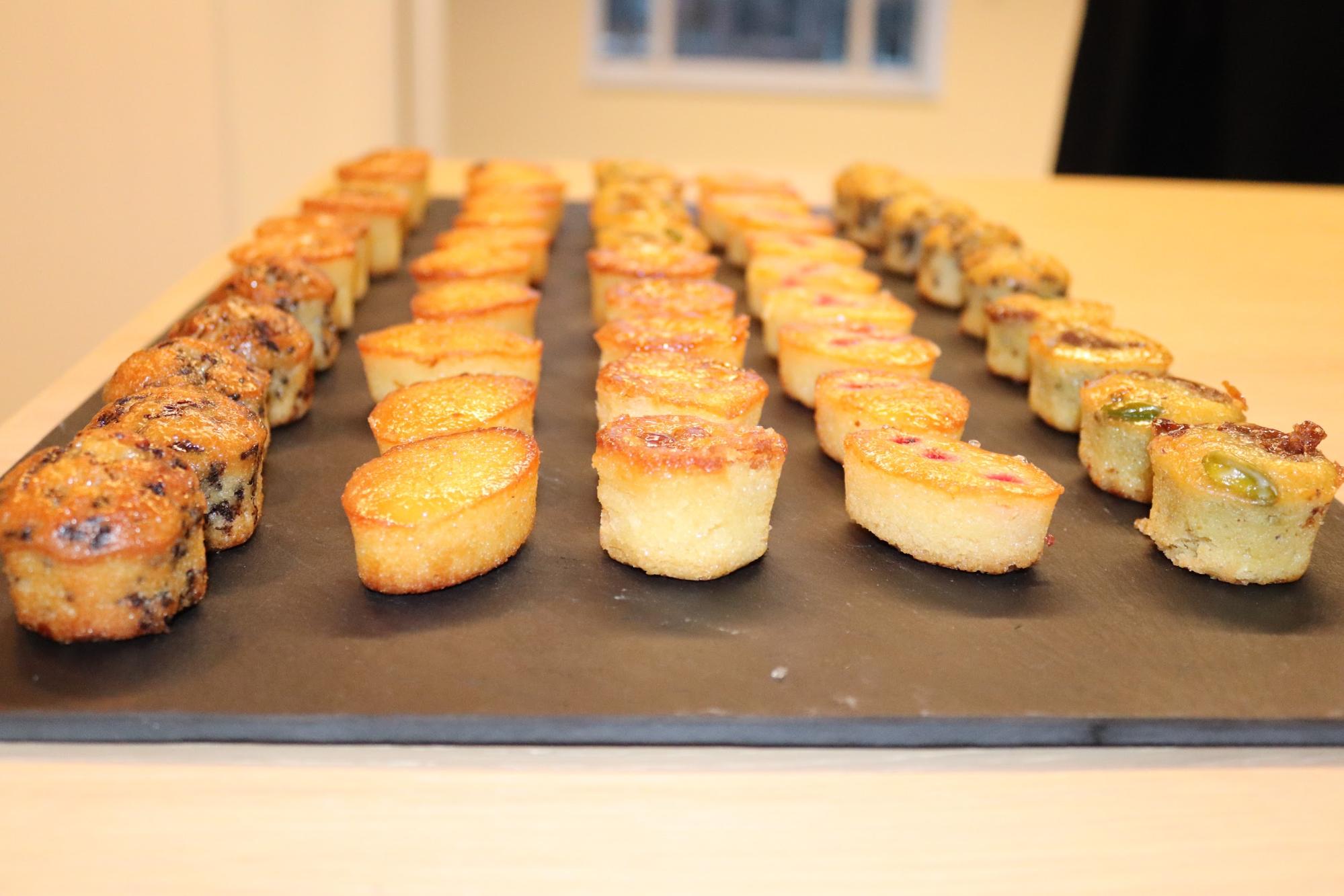 Some of the hapjes (appetizers) on hand.

“The celebration was a wonderful time,” said Arno van Driel, regional vice president of the Benelux and Nordics (joined 2015). “Not just to welcome in the New Year, but also to welcome each other, our partners, the community, and our dear friends to the new office.” 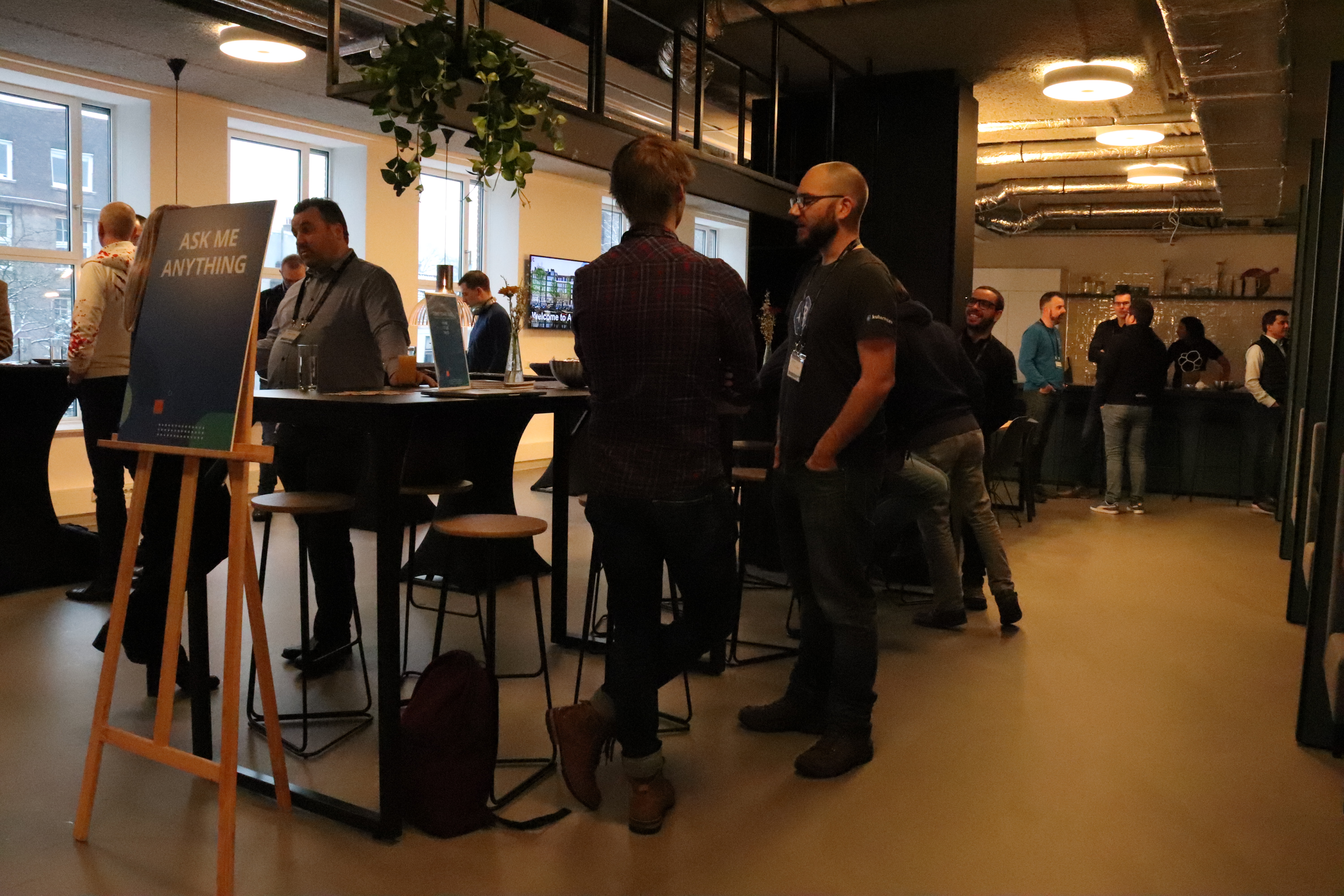 Our Amsterdam community was out in full force at the AMA.

As we’ve started to settle into our new office, we'd like to voice our appreciation for the time and effort put in by so many over the years to get use to where we are today.

We’re constantly growing and adding new Elastic colleagues to our Amsterdam team and around the world. Learn more about new opportunities that may align with your career aspirations by visiting our teams page.