We believe that detections and preventions must be layered, as no single protection works 100% of the time. There are times where detection in the SIEM/central analytics layer is the most effective, especially when you need to take signals from multiple places or correlate the activity to determine it is malicious. However, the most effective way to stop an attack is at the host.

Prevention is paramount when it comes to ransomware. Teams cannot wait to be notified of an issue after their data is encrypted. Layering in the context of multiple signals from anomalous logins to unusual processes can also be telling during the early stages of a breach and help identify root cause. It is the combination of Elastic Security’s SIEM, Endpoint Security, and XDR capabilities in a single solution built for limitless analysis that can protect your organization from damage and loss.

On July 2, 2021, many internet sites and social media posts began warning about a ransomware attack targeting Kaseya and its customers and their customers — a supply chain attack. Kaseya bills itself as an IT management platform for IT teams and MSPs (Managed Security Providers). We have seen this type of attack in the past. The current attack compromised between 800 and 1500 victims.

Perhaps the worst part of the attack is that many of the victims are small businesses that were infected because their MSP or IT used Kaseya. The threat actors demanded $70M from Kaseya, which would be one of the largest single ransomware payouts. While this attack is alarming and perhaps unprecedented, Elastic Security has many preventions and ways to detect this attack. 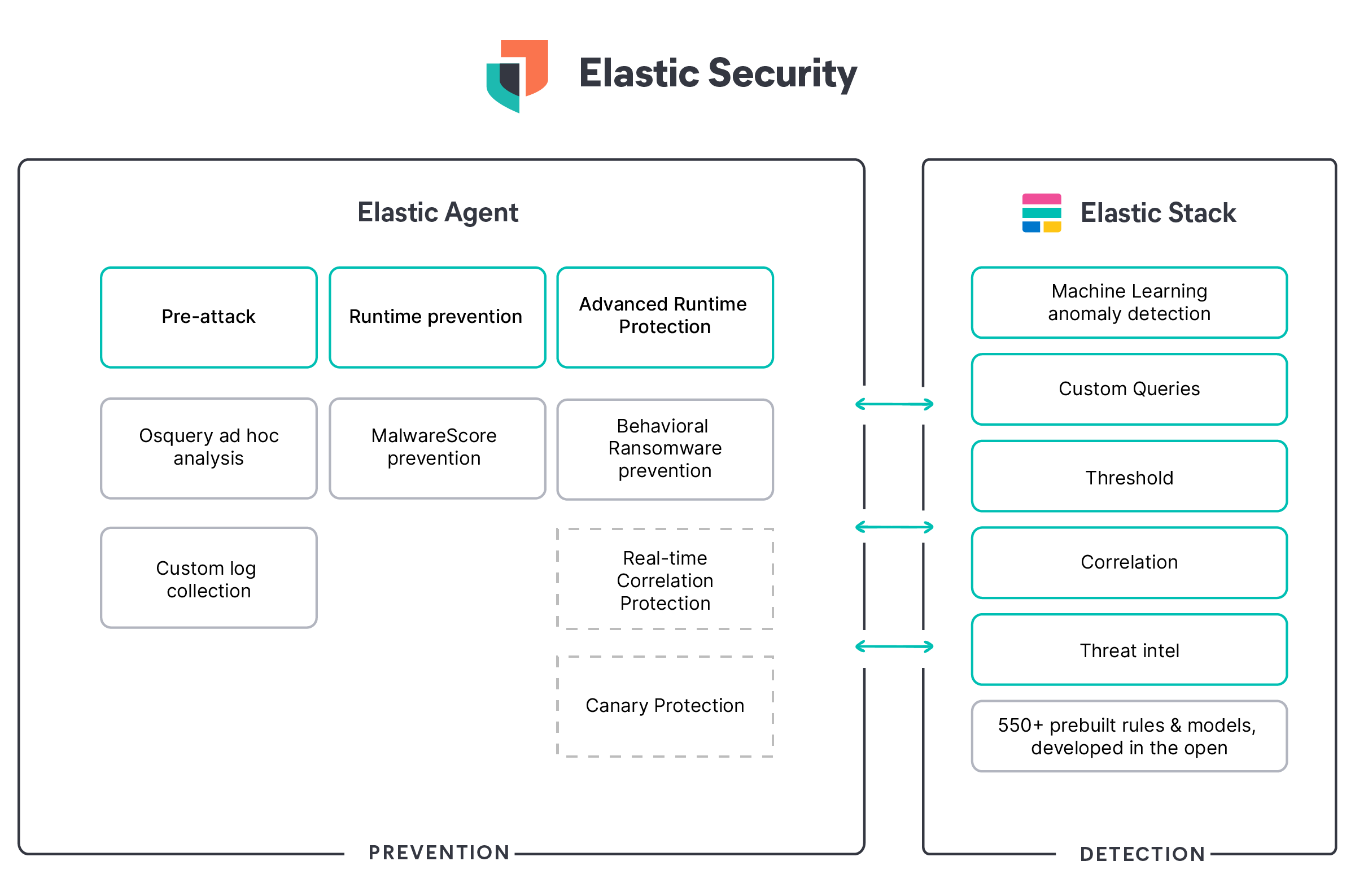 The first layer of defense the attack hit is Elastic’s signatureless malware prevention model, called MalwareScore. This extremely compact and efficient model allows Elastic Security to stop previously unknown attacks leveraging the power of machine learning using an algorithm called gradient boosted decision trees. We tested all known samples (Appendix A) and our malware prevention stopped 64.29%. It is important to note that this defense is pre-execution, stopping this attack before any attacker code can run on the system.

All Elastic Security users and Elastic Endgame users were protected by MalwareScore since model version 4.0.4000 released in March 2021.

Elastic also constantly monitors the file system for potential signs of ransomware activity with behavioral ransomware prevention. This protection, which builds off of the lessons learned from the original Elastic Endgame implementation and has been available since the 7.12 release of Elastic Security, is an added layer of heuristic protection to stop any ransomware attack at runtime which MalwareScore may have missed. When we tested the fourteen REvil samples referenced in Appendix A, this protection had a prevention rate of 100%. Users of Elastic Security have been protected by behavioral ransomware prevention against these samples since the 7.12 release, while Elastic Endgame users have been protected since July 2020.

All Elastic Security users have been protected by behavioral ransomware since 7.12 released in March 2021.

All Elastic Endgame users were protected from July of last year (2020).

Elastic Security provides free and open threat detection capabilities as well that help address techniques used by the REvil criminal ransomware group, and which are developed in public with the community. Using information disclosed by multiple organizations as well as Elastic’s own telemetry visibility, the following rules and machine-learning jobs may help those affected by this threat:

Encoding or Decoding Files via CertUtil - REvil operators renamed the Windows CertUtil.exe application, which was then used to decode their ransomware payload

Potential DLL SideLoading via Microsoft Antimalware Service Executable - REvil operators deployed a deprecated version of Microsoft Windows Defender which was vulnerable to DLL side-loading, and which provided a mechanism to execute their decoded ransomware payload

More is on the way

Just because something is blocked today does not mean we can stop innovating on protections. Numerous soon-to-be-released protections also stopped this attack at the host. These protections, currently in diagnostic mode, were tested against the known samples.

To improve our chances of rapidly catching anomalous file modification behavior patterns typically indicative of ransomware, we have incorporated canary files into our suite of layered protections. Elastic Security is optimized to immediately detect suspicious modifications to these specially crafted files, which are placed throughout the file system in various locations which increase the odds that they are targeted at the onset of a ransomware infection.

When paired with our core behavioral ransomware prevention feature, canary files provide an effective means for reducing our mean time to detect post-execution ransomware and minimize potential adverse effects to the file system. When detonated in our testing environment, 100% of the REvil ransomware samples relating to this attack were detected by modifications to canary files.

Elastic’s commitment to your business

Our mission at Elastic Security is to protect the world’s data from attack. We are constantly innovating in the protection space to ensure our users across the world are protected from tomorrow’s attacks. The solution delivers free and open capabilities of SIEM, Endpoint Security, and XDR on a single platform built for limitless analysis, enabling organizations to prevent, detect, and respond before damage is done.

If you’re new to Elastic Security, you can experience our latest version on Elasticsearch Service on Elastic Cloud for free.

Below are the file hashes of the known samples of the Kaseya VSA supply-chain ransomware attack: