SAML based Single Sign-On with Elasticsearch and Azure Active Directory

With the release of the SAML realm within X-Pack security feature of Elasticsearch 6.2, implementing Single Sign-On (SSO) with a SAML 2.0 compliant identity provider is now just a simple case of configuration. We've written previously about how to enable SAML authentication in Kibana and Elasticsearch. In this post, we'll introduce you to a new feature of the Elastic Azure Resource Manager (ARM) template that makes it simple to integrate Azure Active Directory (AAD) for SAML SSO with a cluster deployed by the template.

Why use SAML SSO with Azure Active Directory?

Using SAML SSO for Elasticsearch with AAD means that Elasticsearch does not need to be seeded with any user accounts from the directory. Instead, Elasticsearch is able to rely on the claims sent within a SAML token in response to successful authentication to determine identity and privileges. As a company using Azure, there's a good chance that you already have all of your users, groups and roles set up within AAD, along with Azure Policy, to govern what individuals can do within Azure, so it makes a lot of sense to allow Elasticsearch to leverage this information to determine who can access the cluster and what they have access to therein.

Let's now take a look at the necessary components needed and walk through deploying a cluster to Azure with SAML SSO configured.

Enabling SSO features for a non-gallery application in Azure Active Directory requires a premium tier of AAD. If you're running on the free or basic tier, it's possible to try the P2 premium tier features for free for a trial period, after which you need to decide whether to continue with it and be billed for usage, or to revert back to the free tier. For the purposes of this post, a trial of Azure Premium P2 will suffice.

An Enterprise application can be created in the Azure Portal by first navigating to Azure Active Directory: 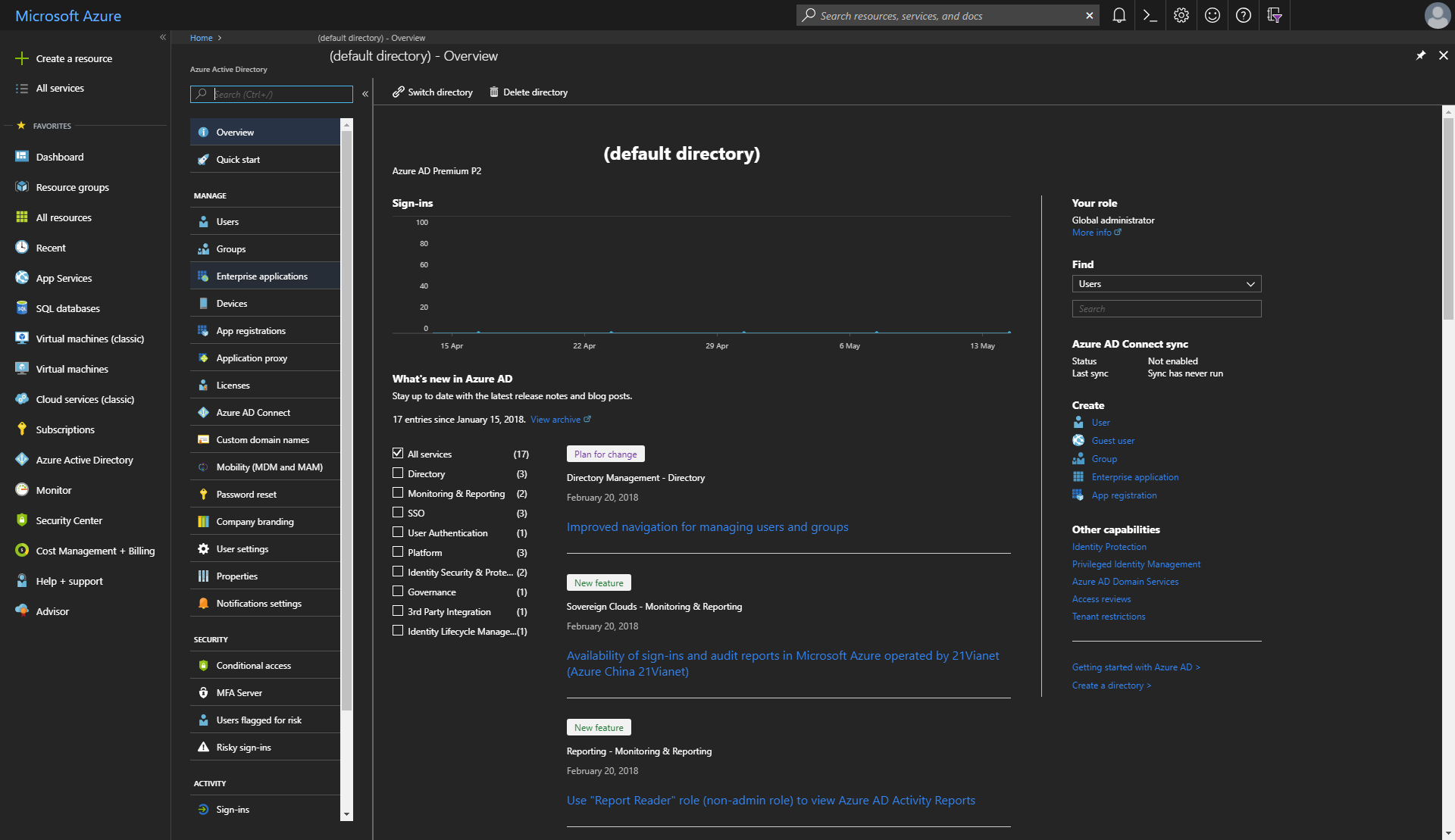 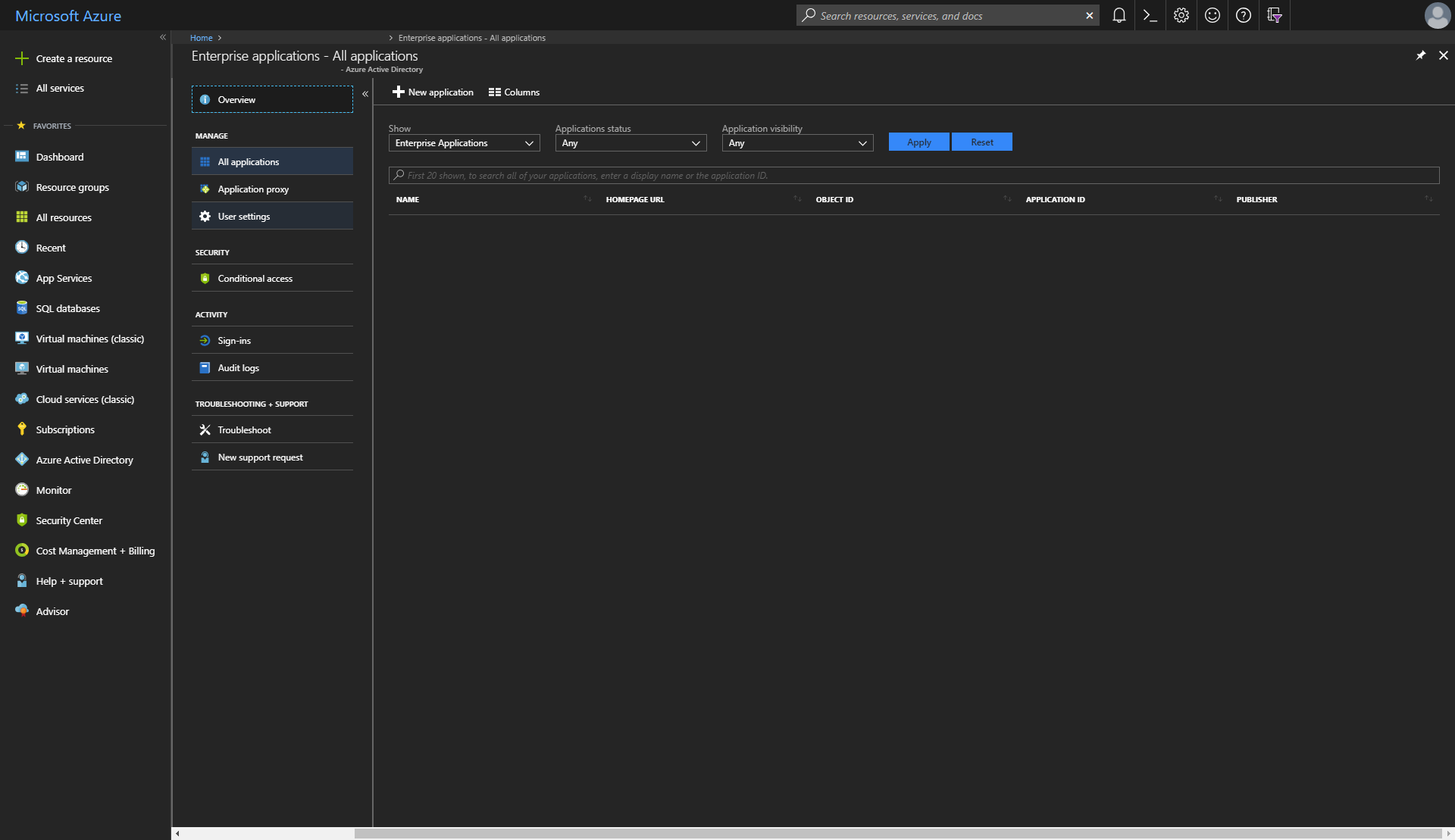 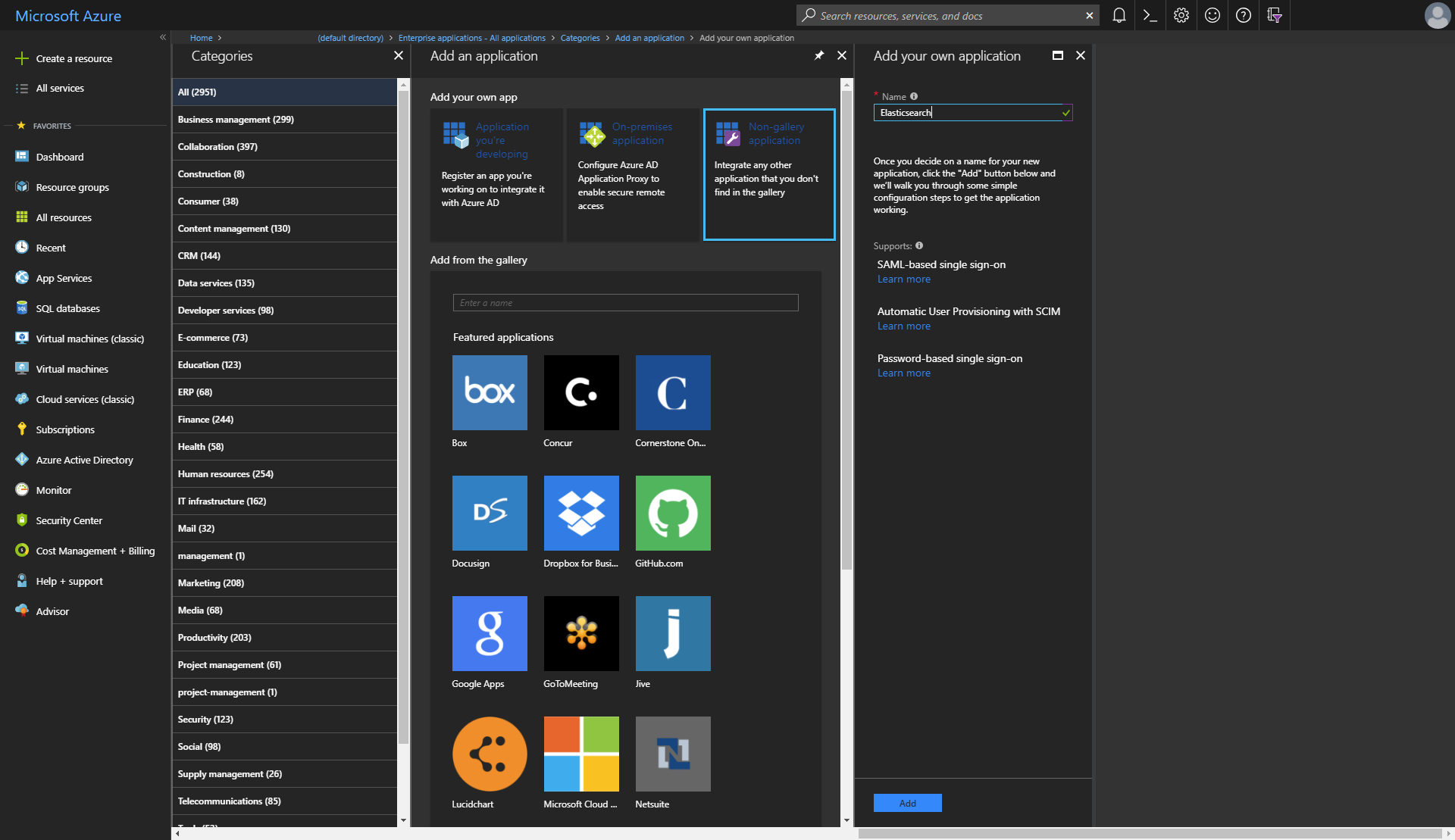 The newly created application will now be listed under Enterprise applications. 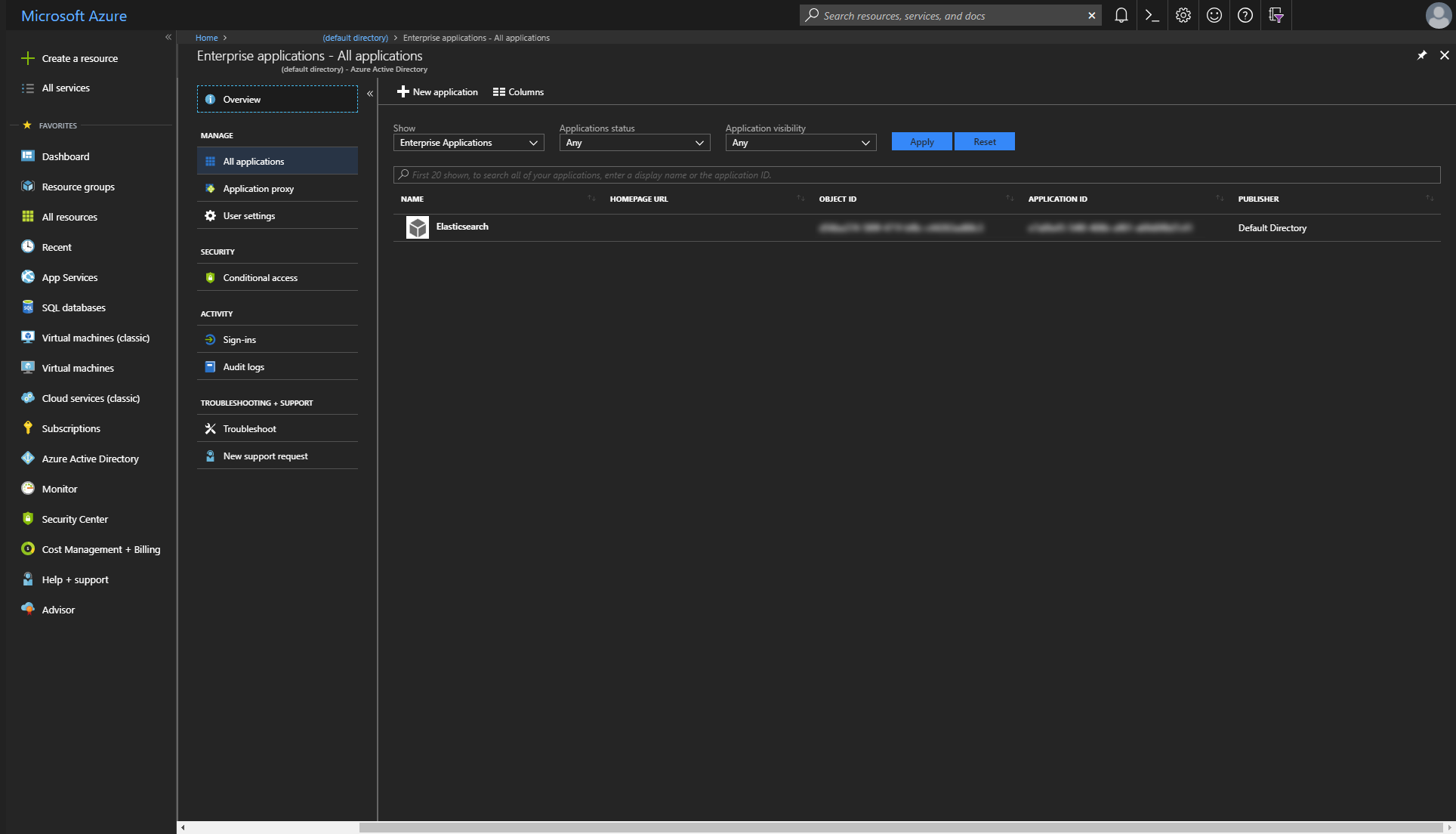 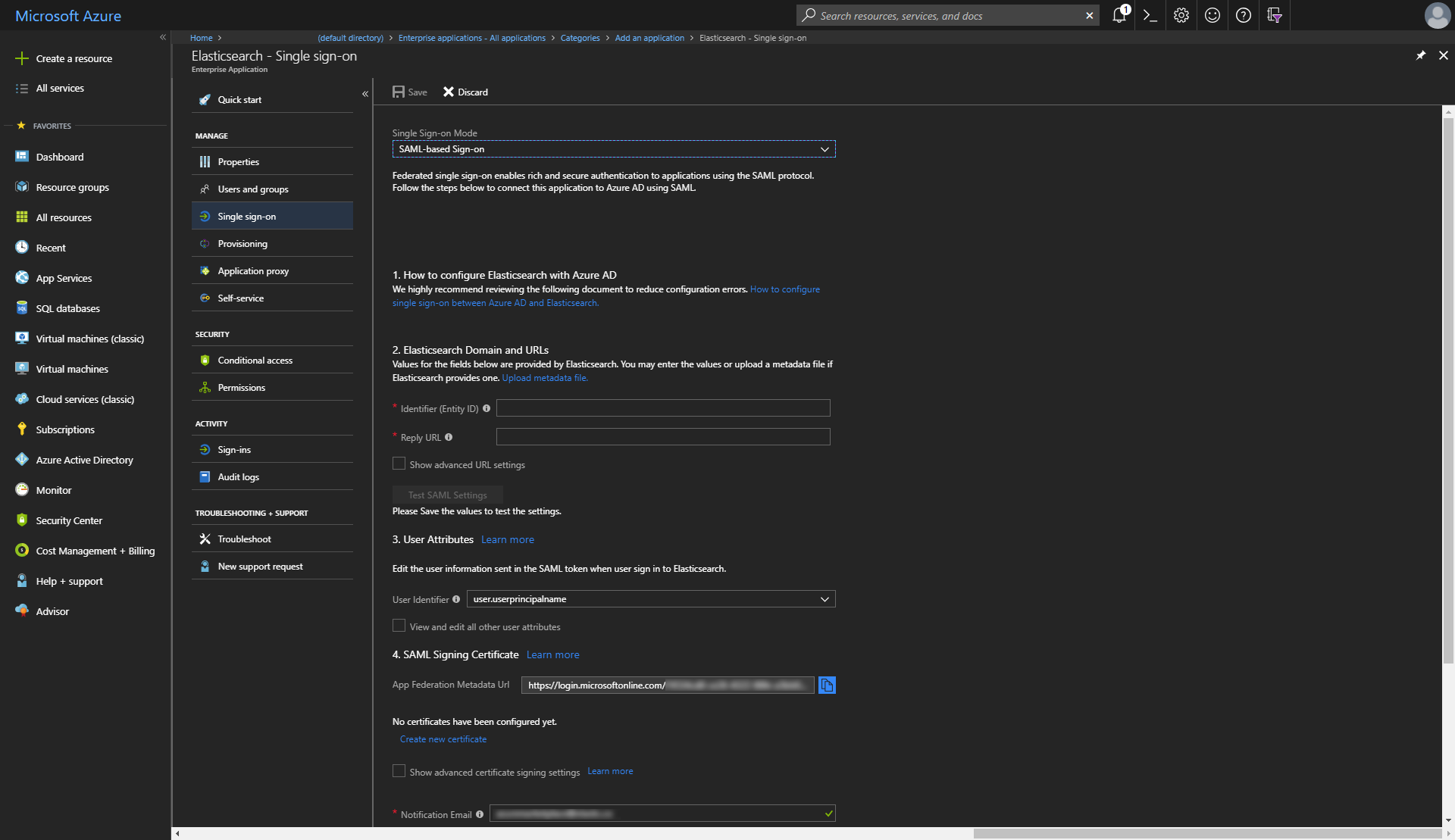 At this point, it's worth noting a few things:

Inspecting the XML returned from the App Federation Metadata Url indicates what Claims are offered by AAD acting as a SAML 2.0 Identity Provider:

Currently, there are 19 different claims offered, and the SAML Token Attributes subsection of the User Attributes section within the Azure portal controls which claims will be sent in the response to a successful authentication request. 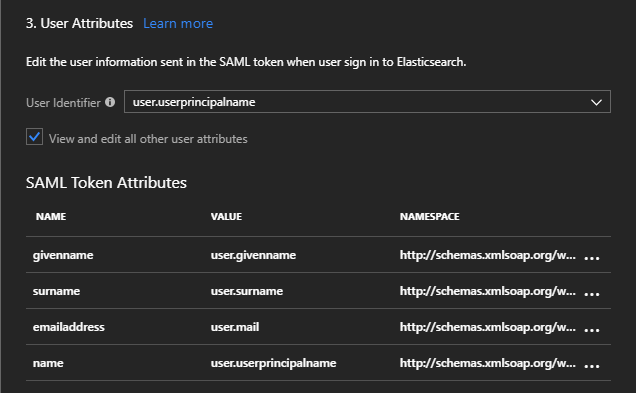 Any other offered claims can also be added here. Note that the Name value will be appended to the Namespace value to form a URI that must match the Uri attribute of an offered auth:ClaimType within the metadata.

The manifest is a JSON object that looks similar to:

There are many different ways we might decide to map how users within AAD will be assigned roles within Elasticsearch, for example, using the tenantid claim to map users in different directories to different roles, using the domain part of the name claim, etc.

The appRole to which an AAD user is assigned will be sent as the value of the role claim within the SAML token, allowing:

For the purposes of this post, let's define a Superuser role within the appRoles:

And save the changes to the manifest: 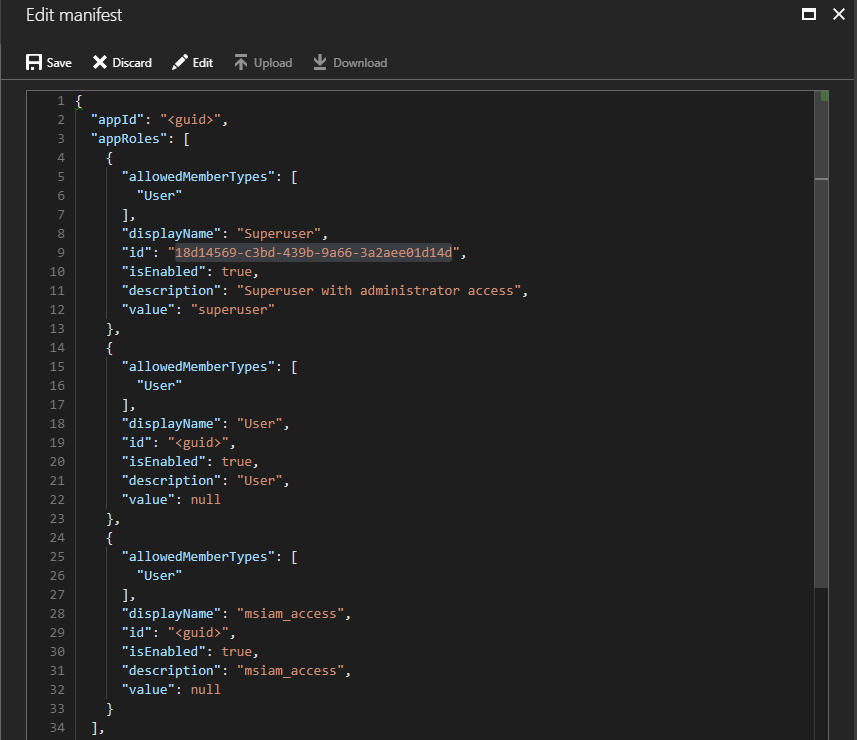 Azure Active Directory can also provide a users group membership information within token claims, which can be used to determine which roles a user should be assigned in Elasticsearch. For example, users who are assigned the Application Administrator role within Azure Active Directory may be configured to have the superuser role within Elasticsearch. 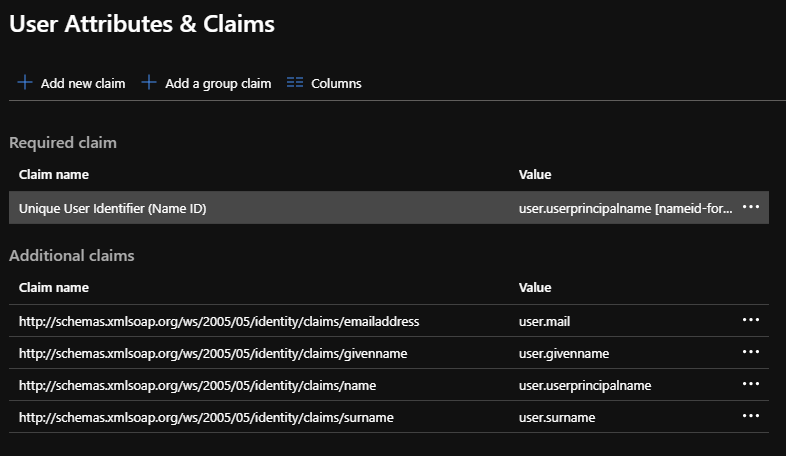 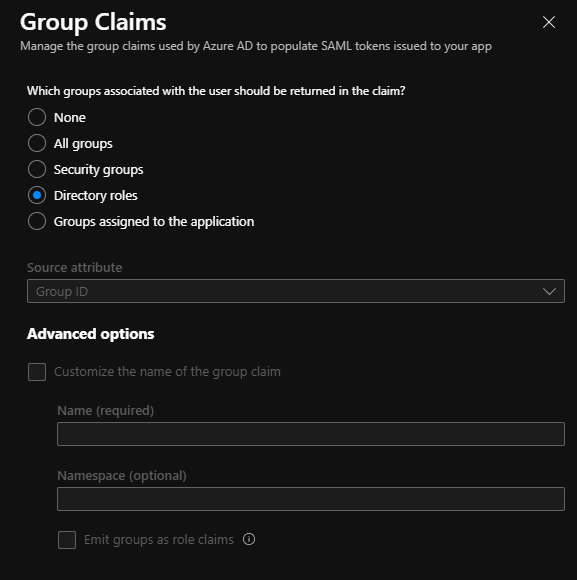 This will cause the RoleTemplate Id claim to be populated with the ids of the directory roles of the user. 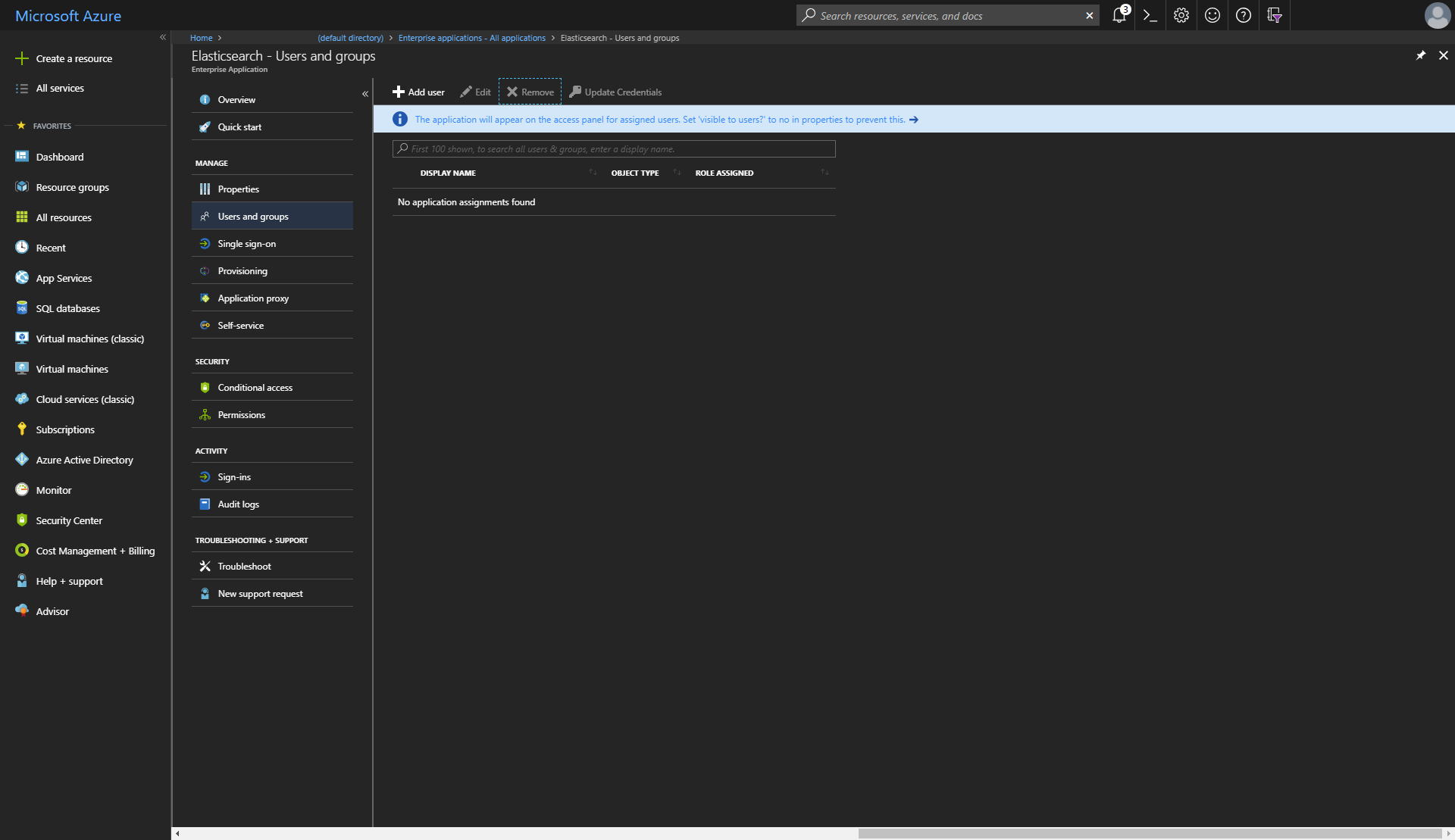 For this post, we'll assign access to one user and give that user the Superuser role created earlier:

And that's it for the minimal amount of Azure configuration needed for SAML-based Single Sign-on! All that's needed now is an Elasticsearch cluster and Kibana configured with AAD as an Identity Provider.

At the start of the post, we announced a new feature within the Elastic ARM template to configure SAML SSO with AAD. There are two new input parameters to the template for this

In addition to providing a value for samlMetadataUri and optionally, samlServiceProviderUri, the following input parameter conditions also need to be satisfied

For a production environment, it's strongly recommended to also configure SSL/TLS for communication with Kibana using kibanaCertBlob and kibanaKeyBlob.

A minimum deployment with the template using Azure PowerShell looks like:

After waiting for the deployment to finish, we can now log in to Kibana at https://saml-aad.elastictest.co:5601. We'll be redirected to Microsoft to log in: 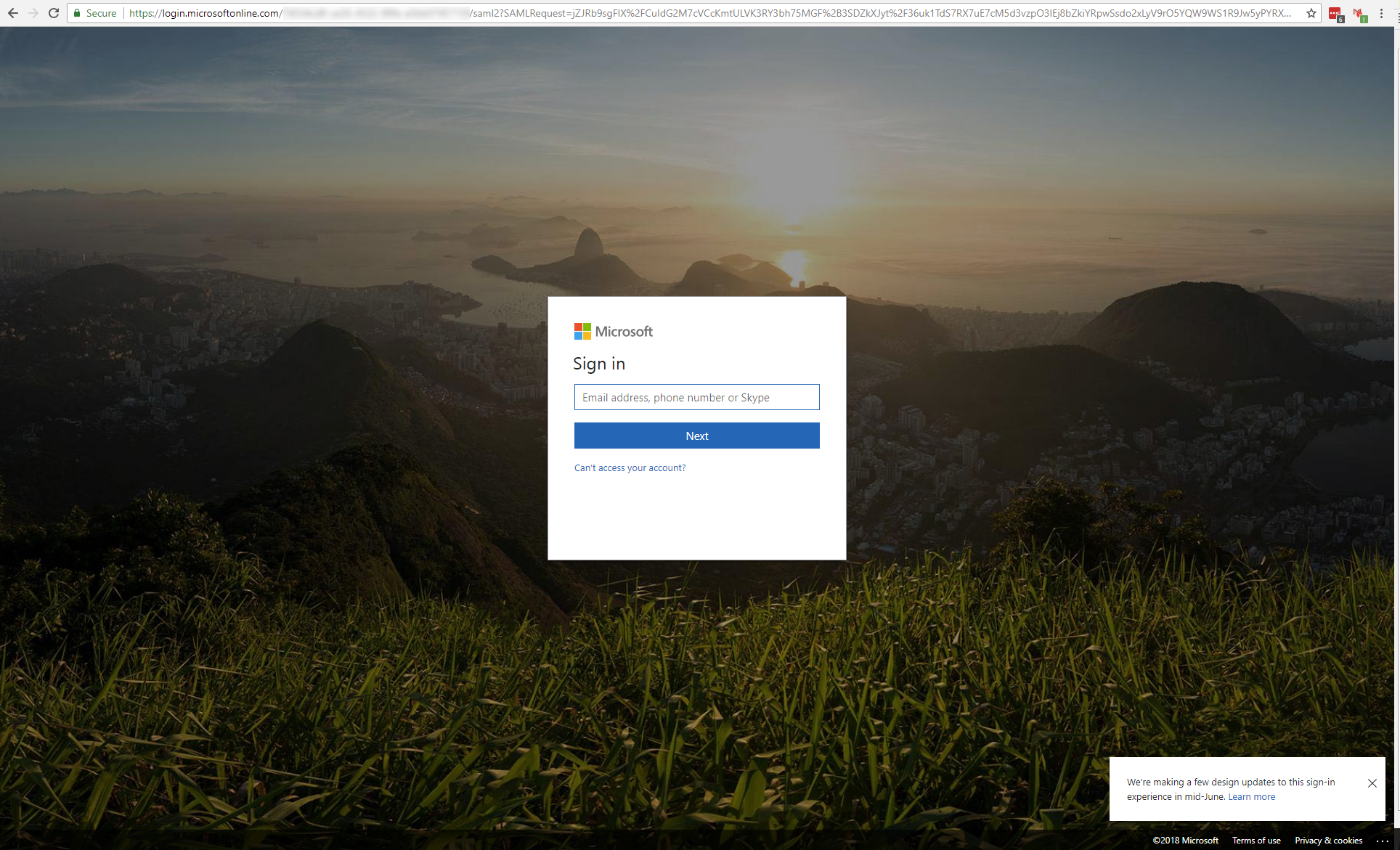 And after successful sign in, we'll be redirected back to Kibana: 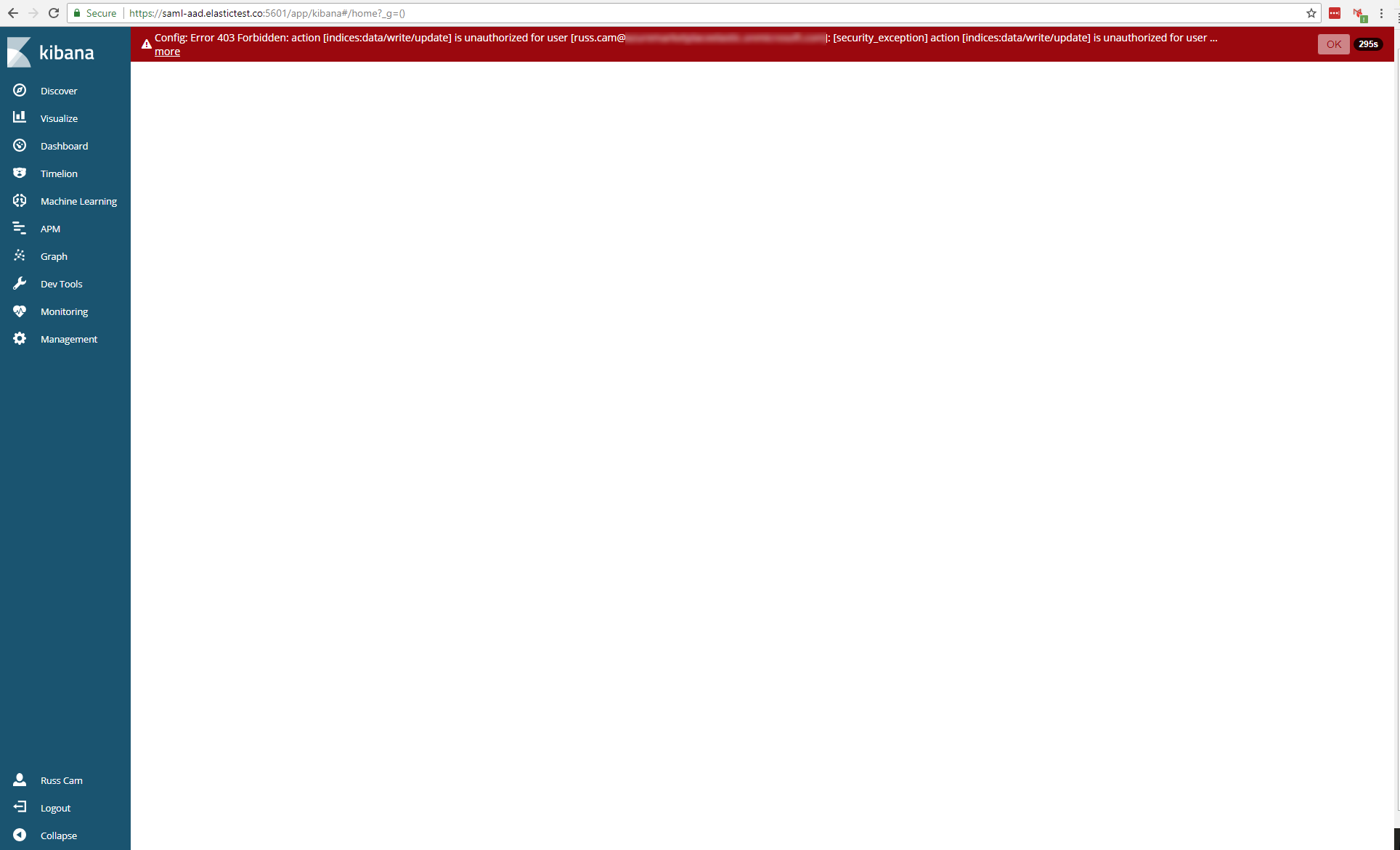 Success, we're now logged into Kibana! There's just one problem though, as can be seen in the red alert at the top of the main viewport in Kibana; we don't have access to anything within Elasticsearch or Kibana right now. Elasticsearch needs to be configured to map the claims presented in the SAML token to roles within Elasticsearch.

The superuser role that we configured within the appRoles of the Enterprise application manifest is coming through in the Role Claim, but the roles array is empty, meaning we have no roles assigned to this user for Elasticsearch. This is where the Role Mapping APIs come in, allowing rules to be defined to identify users and the roles they should be granted within Elasticsearch. The Single Sign-On support for Azure AAD within the ARM template configures a SAML realm called saml_aad within the Elasticsearch configuration, and maps the Role Claim to the groups attribute.

Let's now configure two role mappings for users signing in through the configured saml_aad SAML realm. First, give all users authenticating through the SAML realm the kibana_user built-in role, a role that grants access to Kibana indices and monitoring privileges to the cluster. Second, let's give users with the superuser Role Claim the superuser role within Elasticsearch. If group claims were also configured for the Enterprise application within AAD, we could also use this claim information within role mappings to give different Azure groups specific roles within Elasticsearch.

Since the ARM template SAML realm configuration also still allows access to the cluster using Basic authentication, the built-in elastic superuser account also configured by the ARM template can be used to add the role mappings, either by logging into Kibana through the /login endpoint directly, or if an external load balancer has also been deployed, by issuing a curl request to the external load balancer endpoint. We'll use the former method, and issue the following two requests in Kibana Dev Tools Console:

With these two role mappings defined, when logging in using SAML SSO through AAD now, the user configured earlier has both kibana_user and superuser roles within Elasticsearch, which can be seen by looking at the response to the /api/security/v1/me endpoint:

And that's it, we're all set up for SAML based Single Sign-On through Azure Active Directory! Since SAML SSO with AAD supports SAML logout, the overall SAML login/logout flow looks like:

I hope you'll agree that we've made it easy to configure Azure Active Directory for SAML Single Sign-On with a cluster deployed using the ARM template! As we continue to invest in our Azure offering, we expect to make this even easier in the future with the introduction of an Elasticsearch application in the Azure Active Directory gallery. As ever, we're keen to hear your thoughts and if you have questions about the integration, feel free to open a topic in the Elasticsearch Discuss forums.