Welcome to Keeping up with Kibana! This is a series of posts on new developments in the Kibana project and any related learning resources and events.

The Kibana team continues to move forward on its large initiatives. We’re throwing more resources against getting Canvas to beta. Dave is joining the team for the next two weeks to help polish up the design and get it looking at its best. We’re already making sizable progress there and Catherine’s done a great job migrating to EUI components. With all this early effort Canvas will be our first plugin to use Kibana 7’s styling entirely.

The security team continues their tear of moving Kibana to a role-based access control world. While still early, we’re close on merging some first-phase PRs that will allow us to move to stage 2 of adding individual workspaces to the app. Once that’s in this will let teams segment their content into buckets viewable by certain roles. This should help all of our larger customers who have trouble organizing their 1000s of Kibana saved objects across hundreds of consumers.

We’re also making progress on moving our visualization libraries into EUI where they can be cohesively styled and made more reusable. That team is also very close to merging in a new inspector, which should greatly improve the experience of seeing the data behind each visualization when viewed through a dashboard.

The team continues to focus on features and fixes related to Beta release and eventual migration to the X-Pack codebase. 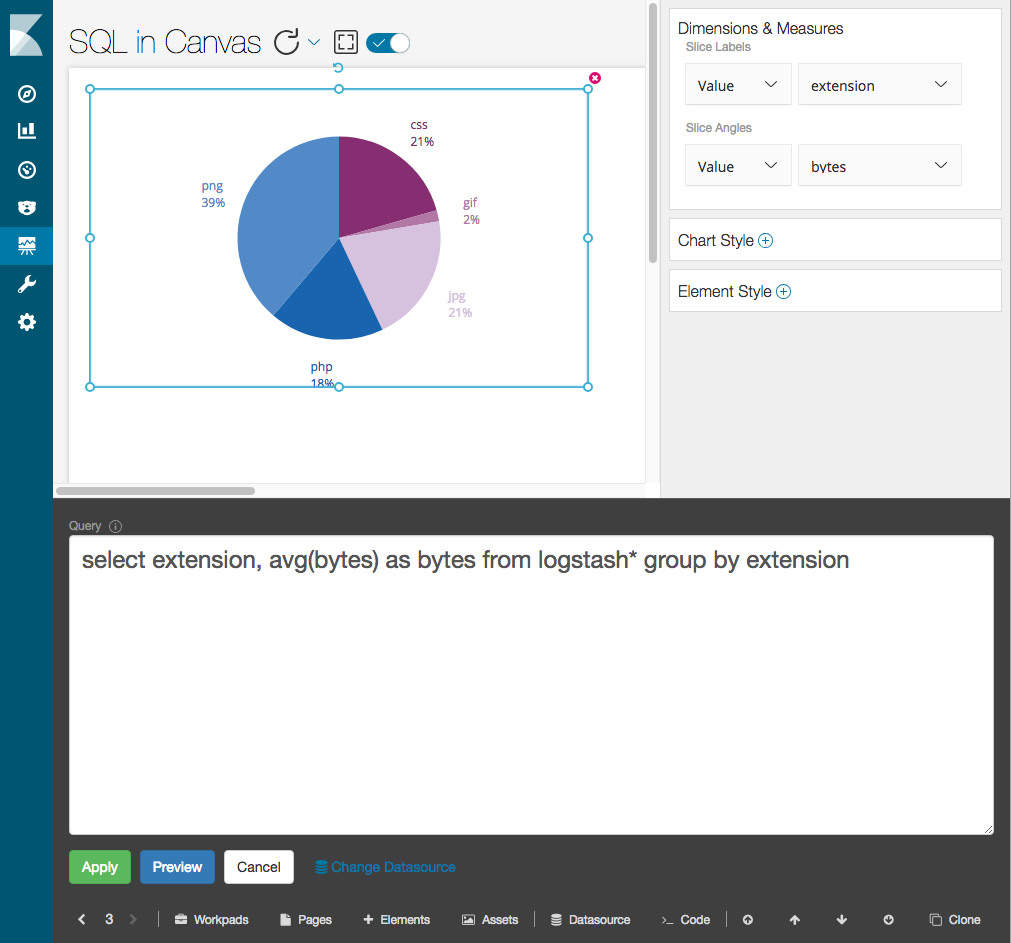 The design team continuing on mocks for Beats central management. Caroline is working through designs for a new Visualizations editor which we’ll be showing off soon. Chandler closed a bunch of blockers around tables and tabs in EUI and built out a service for fixed position popovers that should solve our positioning woes in EUI soon. Dave started work on cleaning up Canvas and hopes to have it looking sharp in the next couple weeks. We’re also working toward getting a super selector component added to EUI soon.

The team focused on the Elastic Map Service landing page and fixing the Sophox application we use to produce our vector data layers. Work continues on the Phase 1 of the GIS App first seen at Elastic{on}.

The team focused on wrapping up phase 1 of index lifecycle management and phase 1 of rollup support in Kibana.  Additionally, some cleanup work is still being done on console.

The first phase of our RBAC project is out for review! This phase is the first step to controlling access to Kibana using custom application permissions, as opposed to direct access to the Kibana index. We put some final touches on this PR, which allows us to introduce this feature in a backwards compatible manner, without requiring any changes to the kibana.yml configuration. This all sets us up nicely for our upcoming second phase, which introduces Spaces (#18948)!

Speaking of Spaces, we collaborated with the Design Team this week to prototype a new UI for managing Kibana privileges within individual spaces. We also added the ability to customize the “avatar” for each space.

Explicit passing of filters and queries (#19172) has been merged. We now no longer rely on inheritance between the application and individual visualizations to apply global filters/queries. Every application (like dashboard) is now required to pass in all global context (filters, queries) explicitly to any visualization. That will allow for panel individual filters/queries and also cleans up some quiet old tech-debts.

The last blocking issues on the new Inspector are nearly resolved and our work on the new XYAxis chart component (eui/#536) is moving forward. We've also started adding extension points into the Editor that are required to support roll-up indexes in the visualization editor.