This article introduces the networking part of Elasticsearch. We look at the network topology of an Elasticsearch cluster, which connections are established between which nodes and how the different Java clients works. Finally, we look a bit closer on the communication channels between two nodes.

6 cluster nodes with connections, each line represents a connection

When a node starts up, it reads a list of seed nodes from its configuration using unicast, and sends multicast messages looking for other nodes in the same cluster.

As the node discovers more instances in the same cluster, it connects to them one by one, asks them for information about all the nodes they know and then attempts to connect to them all and officially join the cluster. In this way, previously running instances assist in quickly getting fresh instances up to speed on the current nodes in a cluster.

Even “client” Elasticsearch nodes (i.e nodes configured with node.client: true or build with NodeBuilder.client(true)) connect to the cluster this way.

This implies that the client node becomes a full participant in the full mesh network. In other words, once it starts joining the cluster, all the existing nodes in the cluster will connect back to the instance. This means that both the client and server firewalls and publish hosts must be properly configured in order to allow this. Additionally, whenever a node client joins, leaves or experiences networking issues, it causes extra work for all the other nodes in the cluster, such as opening / closing network connections and updating the cluster state with the information about the node. 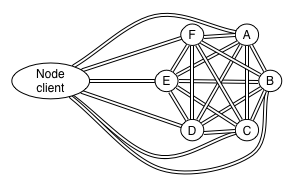 Node client connecting to a cluster

On the other hand, “transport” clients work differently.

Transport client connecting to a cluster

What do we mean when we talk about the connection to a Node in Elasticsearch? In the sections above, we refrained from being specific about it and only used the term as a logical connection that allows communication between two nodes. Let's go into more detail.

Usually, when we talk about connections in the context of networks, we refer to TCP-connections, which provide a reliable line of communication between two nodes.

Elasticsearch uses (by default) TCP for communication between nodes, but in order to prevent important traffic such as fault-detection and cluster state changes from being affected by far less important, slower moving traffic such as query/indexing requests, it creates multiple TCP connections between each node. For each of these connections, Elasticsearch uses the term channel, which encapsulates the serialization / deserialization of messages over a particular connection.

In earlier Elasticsearch versions there used to be three different classes of channels: low, med and high. After a while, ping was added, and a recent change renamed these channels such that they are more descriptive about their intention. At of the time of writing, the following channel classes exist:

The default number of channels in each of these class are configured with the configuration prefix of transport.connections_per_node. 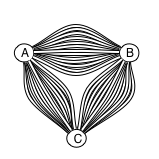 All channels in a three-node cluster. Each line represents a single channel

Elasticsearch has support for TCP keepalive which is not explicitly set by default. This prevents unused or idle channels from being closed, which would otherwise cascade into a complete disconnect-reconnect cycle as explained above.

If one of the 13 channels to a particular node is closed due to intermittent network errors for example, all the other channels to the same node are closed and the connections to the node is reconnected. This is done in order to maintain some internal invariants and to ensure the internal consistency of the communication between the nodes.

The fact that all the channels between two nodes in a cluster are linked makes it extra vulnerable to network issues, and this is one of the reasons why people are discouraged from trying to create a cluster between data centers that are far apart (and thus adding more sources of failure).

In this article we've shown the basic network topology of an Elasticsearch cluster and introduced the concept of channels that are used for communication between nodes. In a later article we'll take a closer look at what goes on inside each of these channels.